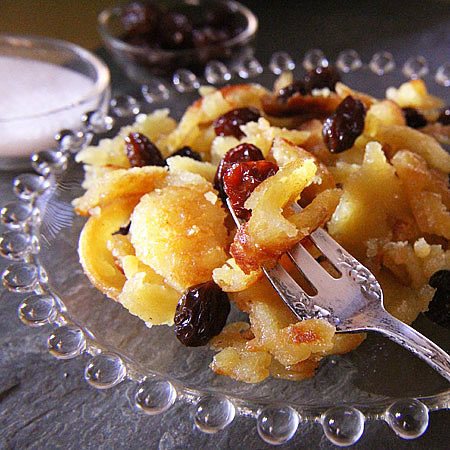 The name of the dessert (Kaiserschmarrn, or Emperor’s mess) came from the Emperor’s wife, Elisabeth, who was obsessed with maintaining her waistline, directed the royal chef to prepare only light desserts. Upon being presented with the chef’s confection, she found it too rich and refused to eat it. The exasperated emperor quipped, “Now let ME see what our chef has cooked up”. Apparently it met his approval as he finished his and his wife’s serving. Thereafter, the dessert was called Kaiserschmarrn.

1. In a small bowl, combine raisins with rum and let soak 30 minutes then drain.

2. In a medium mixing bowl, beat together the milk, eggs, white sugar, vanilla, and salt. Gradually whisk in the flour to make a smooth batter. Stir in the drained raisins.

3. In a large skillet melt 2 tablespoons butter over medium heat. Pour the batter into the skillet and cook 5 to 6 minutes, or until the pancake has set and the bottom is golden brown.

4. Turn over the pancake and cook 3 minutes, or until this side is also golden brown. Using a spatula or two forks, tear the pancake into bite-size pieces.