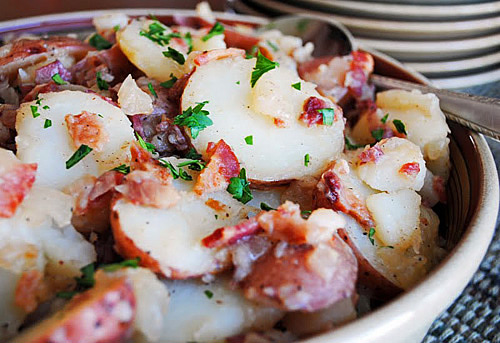 Light salads like lettuce, tomatoes and cucumbers often accompany a meat dish in Germany. Some salads are a dish on their own, like famous German Potato Salad. German salad recipes can vary greatly from region to region. Although many of these recipes have a vinegar and oil base, the addition of a few tablespoons of sour cream to any of them can provide an quick but significant change. Give them a try both ways.

Keep in mind that the term “salad” has a somewhat different meaning in most European countries. Germany and Austria are no exception. Unlike the lettuce-laden salads that are so often served as a starter course in the US, German salads are almost always served with the entrée, and serve more as garden-fresh side dishes. If you don’t typically serve cold salads along with your meal, try it. The crisp coolness of a bite of fresh salad can serve as an excellent contrast in texture and temperature between bites of your hot dishes.