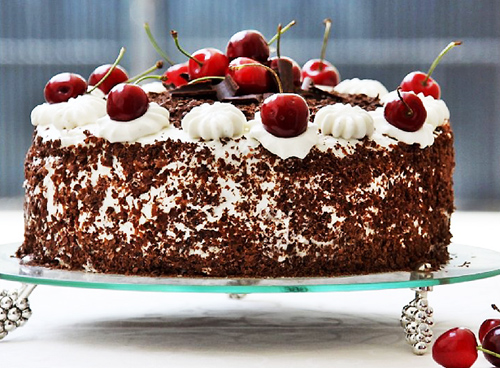 A wide variety of cakes and tarts are served throughout Germany, most commonly made with fresh fruit. Apples, plums, strawberries, and cherries are used regularly in cakes. Cheesecake is also very popular, often made with quark. Schwarzwälder Kirschtorte (Black Forest Cake, made with cherries) is probably the most well-known example of a wide variety of typically German tortes filled with whipped or butter cream. German doughnuts (which have no hole) are usually balls of yeast dough with jam or other fillings, and are known as Berliner, Pfannkuchen (only in the Berlin area), Kreppel or Krapfen, depending on the region. Eierkuchen or Pfannkuchen are large (usually around 20–24 cm in diameter), and relatively thin (~5mm) pancakes, comparable to the French crêpes. They are served covered with sugar, jam or syrup. Salty variants with cheese, ground meat or bacon exist as well as variants with apple slices baked in (called Apfelpfannkuchen -> apple pancakes), but they are usually considered to be main dishes rather than desserts. In some regions, Eierkuchen are filled and then wrapped; in others, they are cut into small pieces and arranged in a heap (called Kaiserschmarrn, often including raisins baked in). The word Pfannkuchen means “pancake” in most parts of Germany.