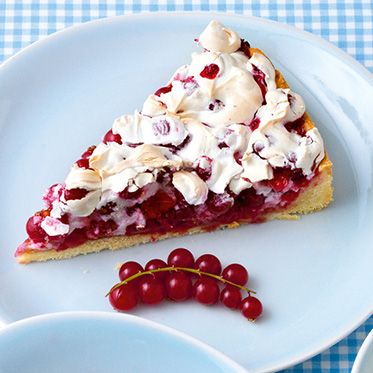 Hands down the best red currant cake out there – Träubleskuchen! The etymology of its name is very curious.  In Swabian, anything can – and will – be diminuted by adding the suffix -le to the noun. Thus a car – Auto – becomes an Autole, a little car, and a house – Haus – a Häusle, a small house. Red currants look a little bit like small grapes, which are Trauben, hence in Swabian they are called Träuble, or small grapes. A word of warning, if you are ever in Germany: before asking for this cake, check your map. Outside the Swabian-speaking parts, red currants are called Johannisbeeren, and nobody will have a clue as to what you mean by a “small grape cake”.