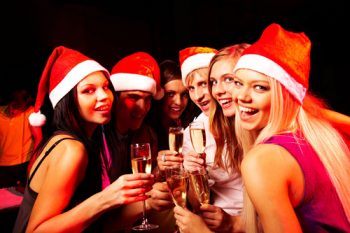 It’s party season, and to help you seamlessly blend into German life and culture we’ve put together our top ten ways you can avoid embarrassment while you’re keeping out the winter chill.

1. Arrive on time. Germans love nothing more than punctuality. While ‘fashionably late“ might be a desirable quality in more laid-back countries, it won’t win you any friends east of the Rhine.

2. Know where your coat is. The first thing you’ll do when you arrive is take off your coat. But make sure you remember where you left it – it’s likely to be one of 100 identical ones lingering around the host’s house during the bitter German winter.

3. Take your shoes off. Tracking dirt all through your host’s beautifully-kept home is a big no-no in Germany. In most cases, you’ll be asked to take your shoes off somewhere close to the front door.

4. Be well-groomed. Turning up looking like a yeti with bed-head isn’t an option in Germany. Make sure you look presentable to the outside world before gathering if you don’t want to be shunned by more orderly folk.

5. Drink like a professional. There’s no doubt that Germans drink a lot when they set their minds to it. But have you ever seen a German really, truly blind drunk? Germans start drinking in their mid-teens and know how to handle it – pacing yourself is a must. But you should also know how to open a beer bottle with anything from your cigarette lighter to your shoes.

6. Ignore the bad music. Germans love the 90s pop, old one-hit wonders from the Anglosphere, and Schlager (if you don’t know it, count yourself lucky). You’ll need to be a great conversationalist to blot out the awfulness.

7. Don’t be coy. In Germany, it’s not rude to look at people (although staring is to be avoided). Where in other countries you might glance and look away, if you’re interested in someone here you should look straight at them (and go and talk to them soon after, or it quickly gets weird). When you’re talking, be direct and say what you mean – and don’t take offense when others do the same.

8. Recycle your bottles. Almost all glass bottles are recycled in Germany, and if you’re at a party then the host will likely be collecting them somewhere. Don’t throw them away and try not to break them – they’re worth a few coins and it’s good for the environment!

9. Respect “quiet time”. While German parties may last into the wee hours, you should be careful that you aren’t disturbing your neighbors on the way home. Germans are serious about their “Ruhezeit” – which in many places includes all day on Sunday – and won’t take kindly to rowdy partygoers interrupting their rest.