A “Schultüte” (or School Cone, even though the word “Tüte” translates more as “bag” from German), is a paper or plastic bag in form of a big cone.

When children in Germany, Czech Republic, close to the borders with Germany, parts of Poland (Greater Poland, Upper Silesia, Warmia), Austria, and parts of Switzerland set off for their first day in school upon entering first grade, their parents and/or grandparents present them with a big cardboard cone, prettily decorated and filled with toys, chocolate, candies, school supplies, and various other goodies. It is given to children to make this anxiously awaited first day of school a little bit sweeter. 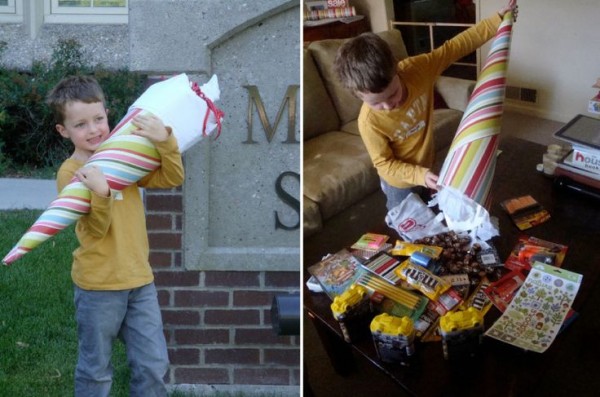 The tradition of the “Schultüte” leads back to approximately 1810, to Saxony and Thuringia in Germany. The first documented report of the cone-shaped Schultüte comes from the city of Jena in 1817, closely followed by reports from Dresden (1820) and Leipzig (1836). It started in the bigger cities but spread quickly to the small towns and villages, soon becoming an institution all over Germany.

At first the practice of the school cone, which did not spread to other parts of Germany at this time, was to not give the bag to the kids directly. Marked with the students’ names, they were taken to the school by grandparents or godparents and in a ritual, reminiscent of the Mexican piñata, hung on a metal “Schultüten-Baum” (School cone tree) from which each child had to pick his or her cone, without breaking it. The story told to the children goes, that there is a Schultütenbaum growing at the school, and if the fruits (the Schultüten) are ripe and big enough to pick, it’s time to go to school for the first time.

The only custom that has changed in the latter half of the 20th century is that fewer sweets seem to appear in the Schultüte, with more practical gifts such as crayons and pencils, small toys, CDs, books and even articles of clothing replacing the traditional chocolates and candies. These are traditionally given by grandparents who also take the child out to dinner the evening before school begins.