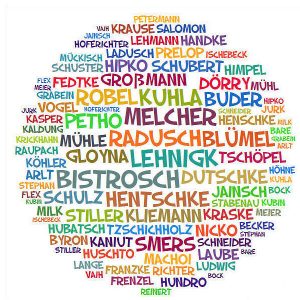 Surnames play a huge role in our life and you can expect any surname you can think of already exists. But it gets really bizarre when you start to browse through the German telephone book.

Here are 9 of some of the weirdest German surnames and they are all real! First names have been altered though, to spare real people the ridicule.

The German phonebook is awash with surnames like Müller, Jäger and Meier. And this makes perfect sense. Every community back in feudal times needed a miller, a hunter and a manager.

Some ye oldie professions seem harder to explain. What exactly the farmland function of a Vormelker was is beyond us. We imagine though, given that Melker (Milker) is also a surname, the Vormelkers always had to make do with being the warm up act to the main event.

Given some of the other names on this Hildegard can perhaps consider herself lucky. It’s a shame for her that the word Handschuh conjured such strange images in an Anglophone’s head – but that is our fault not hers. According to forebears.io the name stems from a profession of glove makers. There are still over 2,000 Handschuhs in the world today.

Talking of shoes serving a strange purpose, we can only guess what Thomas’ forebears got up to. Perhaps they were responsible for creating the legendary beer boot so beloved in German bars in the US.

There are several German surnames that seem to pay tribute to a person’s love for the liquor. Among our favourites are Saufhaus (Drink-house) and Bierwagen (Beer-cart). We can only imagine Mr. Kotz (Vomit) spent a bit too much time round at the Saufhauses.

It isn’t all about boozing though. As we all know, Germans love their sweet desserts – so why not take your name from one? While an egg cake might not sound like the most exquisite thing going, Hans Sauermilch (Sour-milk) is in no place to poke fun.

Someone back in days of yore either really liked going on walks in the forest or lived on the other side of one. Perhaps irritated neighbors were so sick of explaining the directions to the family home that they decide to name them after the way there.

One can only conclude that there was something of the night about Nina’s forbears. We also happen to know the perfect companion for her: Karl Kühlmorgen (Cool-morning).

Trust Germany to get super, super dark with some of its surnames.

We just don’t want to know what Herr Leichenberg’s ancestors did. Want to go a level darker? Judenfeind (Jew enemy) is a real German surname, but then again, so is Judenfreund (Jew-friend). At least people nailed their colours to the mast back then.

If this lady’s name is anything to go by, she must be a favorite auntie. Kitzler doesn’t just simply provide the innocent fun of a bit of tickle torture though, the name is also a nickname for the clitoris.

While Hildegard’s name no doubt gave her classmates a good giggle, we can only imagine the look on the teachers’ faces when they had to call out Willi Fickbaum’s (F*ck tree) name every morning.