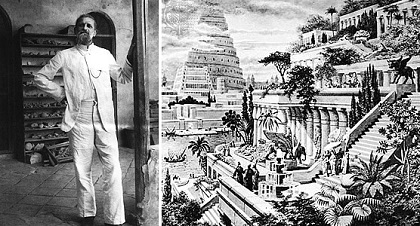 Birth of Robert Koldewey in Blankenburg am Harz, Germany. Koldewey was an archeologist who found the remains of the city of Babylon in southern Iraq. He began digging on March 26, 1899, and continued to work there with little interruption for the next 18 years. One of Koldewey’s most dramatic discoveries was the foundation of the temple of Marduk, a ziggurat, or terraced structure surmounted by an astronomical observatory. He believed he had found the remains of the Hanging Gardens of Babylon, one of the Seven Wonders of the World, when he uncovered an arched structure with a remarkably engineered well nearby.

Birth of Franz Werfel in Prague, Austria-Hungary (now in the Czech Republic). He fled Germany as the Nazi movement came to power. Noted works by Werfel include Venti, Roman der Oper (1924), Die Vierzig Tage des Musa Dagh (1933) and Das Lied von Bernadette (1941). The Bernadette novel was inspired by a visit to Lourdes, France during his flight to America. In America he settled in Hollywood, California, where he died in 1945. 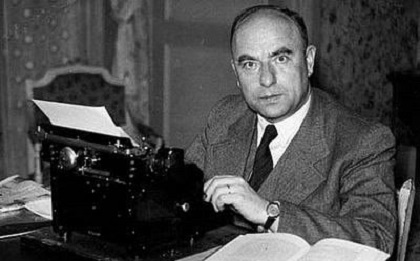 Birth of Otto Strasser in Windsheim, Germany. Otto Strasser was an early member of the Nazi party, but also left the party early and fled to Canada. Together with his brother Gregor Strasser, he was a leading member of the party’s left-wing faction, and broke from the party due to disputes with the ‘Hitlerite’ faction. He formed the Black Front, a group intended to split the Nazi Party and take it from the grasp of Hitler. This group also functioned during his exile and World War II as a secret opposition group.

Assassination of Elizabeth, empress of Austria and queen of Hungary. Elizabeth was the wife of emperor Franz Josef of Austria. She was assassinated on a visit to Switzerland by an Italian anarchist, Luigi Luccheni.

Austria signs a peace treaty ending World War I which is a separate treaty from that signed by Germany and Hungary. The Austro-Hungarian Empire has disintegrated by this date and Austria is but a small country. The treaty in effect simply recognized the demise of the Austro-Hungarian Empire. Austria recognized in the treaty the independence of Czechoslovakia, Poland, Yugoslavia and Hungary. It accepted the granting of Austrian Galicia to Poland and the territories of Trentino, South Tyrol, Trieste, and Istria to Italy. The army was limited to 30,000. Austria was specifically forbidden to unite with Germany.

Death of George Henschel in Scotland (born in Breslau, Germany (now in Poland). The musician, George Henschel, studied in Leipzig and Berlin. He immigrated to England in 1877 where he became a leading orchestra conductor. He was the first conductor of the Boston Symphony Orchestra (1881-1884).