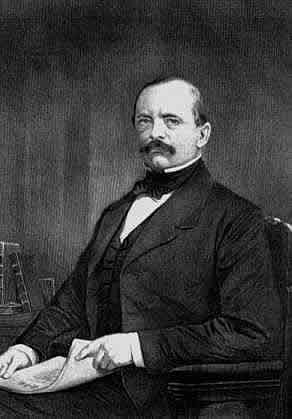 In 1867 the North German Confederation was established. It was an unbelievable political success at that time. On the other hand, Bismarck’s wish to see Germany united would not have been totally satisfied without the southern states attached to it. Thus Bismarck set about trying to add the southern states to the Confederation. The beginning negotiations, including the offer of all-German parliament and the joint military training, failed just like in case of Austria. Bismarck supposed that the war with France could speed up the events. A great diplomat, Bismarck arranged that Russia and Austria stay away from the coming conflict.

It was easy to provoke the war since there were two reasons for that:

1. Napoleon III, the French emperor, was quite furious at the sudden emergence of the new military force in Europe.
2. The conflict between the royal families of France and Spain touched Prussia, because in 1869 the Spanish crown was offered to the cousin of William I. To Napoleon III this looked like a threat to surround and crush France. He demanded that William’s cousin reject the offer and not accept it in the future. The Prussian monarch refused any requests. Being a smart tactician, Bismarck arranged the occurrence of the situation in the press in such a way that the French attempted to humiliate and insult the Prussian king.

In July 1870, France started war with Prussia. In the battle by Sedan the Prussian troops defeated the French, and the war seemed to be over. However France managed to hold out till January 1871, when the anti-French mood (caused by Bismarck) achieved its highest peak, and four southern states joined the North German Confederation to create the German Empire. It was the first time when Bismarck had glory, honors and riches generously poured on him.

The constitution of German Empire was built on the Prussian constitution and included a position of chancellor created especially for Bismarck, who was also a prime minister of Germany till 1890, when the new king William II dismissed him.

The next 40 years following the foundation of the German empire, were the years of peace in Europe. Bismarck negotiated “Dreikaiserbund” (“Three Emperors League”) with Russia and Austria-Hungary, then the Dual Alliance with Austria-Hungary only, and then turning it into a Triple Alliance by joining of Italy. It was due to him that several European wars were avoided, and Bismarck acquired a reputation of a solid peace-maker, and the respect of the European leaders.

In 1878-79 Bismarck implemented significant economic reforms which made Germany one of the strongest financial powers in Europe, one of the chief assets of which was the putting of Tariffs on iron and grain. Bismarck introduced the world’s first welfare scheme which provided sickness, accident and old age benefits.

Internally, Bismarck rooted out any who opposed the Empire – Catholics, socialists, and liberals. On this issue, he met with mixed results. In 1890, Kaiser Wilhelm II, displeased with Bismarck’s cautious foreign policy, dismissed him.

The ex-chancellor retired to his estate near Hamburg, where he died on July 30, 1898. Ironically, Bismarck’s dream – a unified Germany – was torn apart by his domestic policy, which culminated in the Nazi regime.


Related articles:
Early Life and Success of Bismarck
Bismarck and the Unification of Germany