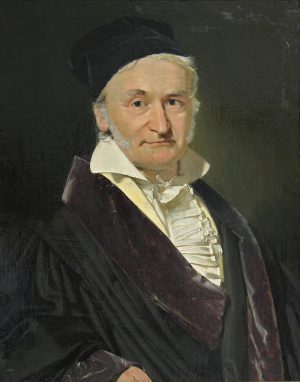 Carl Friedrich Gauss is sometimes referred to as the “Prince of Mathematicians” and the “greatest mathematician since antiquity”. He has had a remarkable influence in many fields of mathematics and science and is ranked as one of history’s most influential mathematicians.

Gauss was a child prodigy. There are many anecdotes concerning his precocity as a child, and he made his first ground-breaking mathematical discoveries while still a teenager.

At just three years old, he corrected an error in his father payroll calculations, and he was looking after his father’s accounts on a regular basis by the age of 5. At the age of 7, he is reported to have amazed his teachers by summing the integers from 1 to 100 almost instantly (having quickly spotted that the sum was actually 50 pairs of numbers, with each pair summing to 101, total 5,050). By the age of 12, he was already attending gymnasium and criticizing Euclid’s geometry.

Although his family was poor and working class, Gauss’ intellectual abilities attracted the attention of the Duke of Brunswick, who sent him to the Collegium Carolinum at 15, and then to the prestigious University of Göttingen (which he attended from 1795 to 1798). It was as a teenager attending university that Gauss discovered (or independently rediscovered) several important theorems.

At 15, Gauss was the first to find any kind of a pattern in the occurrence of prime numbers, a problem which had exercised the minds of the best mathematicians since ancient times. Although the occurrence of prime numbers appeared to be almost completely random, Gauss approached the problem from a different angle by graphing the incidence of primes as the numbers increased. He noticed a rough pattern or trend: as the numbers increased by 10, the probability of prime numbers occurring reduced by a factor of about 2 (e.g. there is a 1 in 4 chance of getting a prime in the number from 1 to 100, a 1 in 6 chance of a prime in the numbers from 1 to 1,000, a 1 in 8 chance from 1 to 10,000, 1 in 10 from 1 to 100,000, etc). However, he was quite aware that his method merely yielded an approximation and, as he could not definitively prove his findings, and kept them secret until much later in life.

Gauss’s first significant discovery, in 1792, was that a regular polygon of 17 sides can be constructed by ruler and compass alone. Its significance lies not in the result but in the proof, which rested on a profound analysis of the factorization of polynomial equations and opened the door to later ideas of Galois theory. His doctoral thesis of 1797 gave a proof of the fundamental theorem of algebra: every polynomial equation with real or complex coefficients has as many roots (solutions) as its degree (the highest power of the variable). Gauss’s proof, though not wholly convincing, was remarkable for its critique of earlier attempts. Gauss later gave three more proofs of this major result, the last on the 50th anniversary of the first, which shows the importance he attached to the topic.

Gauss’s recognition as a truly remarkable talent, though, resulted from two major publications in 1801. Foremost was his publication of the first systematic textbook on algebraic number theory, Disquisitiones Arithmeticae. This book begins with the first account of modular arithmetic, gives a thorough account of the solutions of quadratic polynomials in two variables in integers, and ends with the theory of factorization mentioned above. This choice of topics and its natural generalizations set the agenda in number theory for much of the 19th century, and Gauss’s continuing interest in the subject spurred much research, especially in German universities. 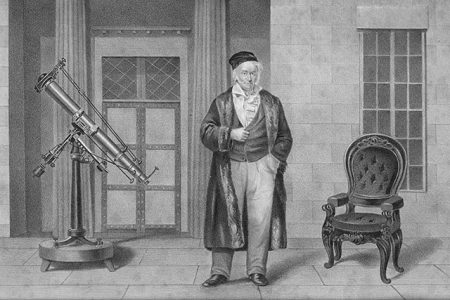 The second publication was his rediscovery of the asteroid Ceres. Its original discovery, by the Italian astronomer Giuseppe Piazzi in 1800, had caused a sensation, but it vanished behind the Sun before enough observations could be taken to calculate its orbit with sufficient accuracy to know where it would reappear. Many astronomers competed for the honor of finding it again, but Gauss won. His success rested on a novel method for dealing with errors in observations, today called the method of least squares. Thereafter Gauss worked for many years as an astronomer and published a major work on the computation of orbits—the numerical side of such work was much less onerous for him than for most people. As an intensely loyal subject of the duke of Brunswick and, after 1807 when he returned to Göttingen as an astronomer, of the duke of Hanover, Gauss felt that the work was socially valuable.

In fact, Gauss often withheld publication of his discoveries. As a student at Göttingen, he began to doubt the a priori truth of Euclidean geometry and suspected that its truth might be empirical. For this to be the case, there must exist an alternative geometric description of space. Rather than publish such a description, Gauss confined himself to criticizing various a priori defenses of Euclidean geometry. It would seem that he was gradually convinced that there exists a logical alternative to Euclidean geometry. However, when the Hungarian János Bolyai and the Russian Nikolay Lobachevsky published their accounts of a new, non-Euclidean geometry about 1830, Gauss failed to give a coherent account of his own ideas. It is possible to draw these ideas together into an impressive whole, in which his concept of intrinsic curvature plays a central role, but Gauss never did this. Some have attributed this failure to his innate conservatism, others to his incessant inventiveness that always drew him on to the next new idea, still others to his failure to find a central idea that would govern geometry once Euclidean geometry was no longer unique. All these explanations have some merit, though none has enough to be the whole explanation. 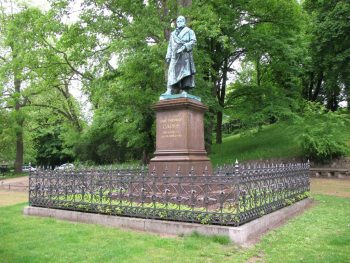 Statue of Gauss at his birthplace, Brunswick

Gauss’ achievements were not limited to pure mathematics, however. During his surveying years, he invented the heliotrope, an instrument that uses a mirror to reflect sunlight over great distances to mark positions in a land survey. In later years, he collaborated with Wilhelm Weber on measurements of the Earth’s magnetic field, and invented the first electric telegraph. In recognition of his contributions to the theory of electromagnetism, the international unit of magnetic induction is known as the gauss.

After Gauss’s death in 1855, the discovery of so many novel ideas among his unpublished papers extended his influence well into the remainder of the century.

Gauss’s personal life was overshadowed by the early death of his first wife, Johanna Osthoff, with whom he had three children, in 1809, soon followed by the death of one child, Louis. Gauss plunged into a depression from which he never fully recovered. He married again, to Johanna’s best friend, Friderica Wilhelmine Waldeck, commonly known as Minna. They also had three children. When his second wife died in 1831 after a long illness, one of his daughters, Therese, took over the household and cared for Gauss for the rest of his life.