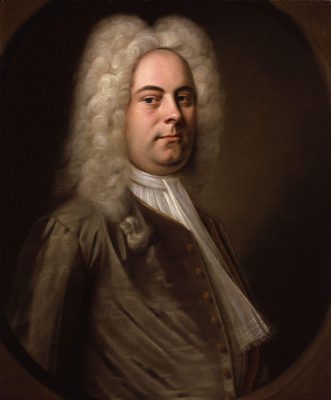 George Frideric Handel (born Georg Friedrich Händel on February 23, 1685 – died on  April 14, 1759) was a German, later British, baroque composer who spent the bulk of his career in London, becoming well known for his operas, oratorios, anthems, and organ concertos.

Although born in Halle, Germany, to German parents, he spent the greater part of his working life in London, and later on took British citizenship. Initially kept away from musical instruments by his father, who wanted him to go into legal profession, George Frideric Handel learned to play keyboard instruments secretly.

Later, he had formal lessons from Friedrich Wilhelm Zachow, then a church organist at Halle, on the suggestion of Johann Adolf I, Duke of Saxe-Weissenfels, whose words his father could not disobey. Even as a student, he began to take up his master’s duties and started composing church music. Later he moved to Hamburg and then to Italy before being appointed a Kapellmeister at Hanover. But within a year he visited London, where his ‘Rinaldo’, an Italian opera especially composed for London, was received with great enthusiasm. Very soon, he received royal patronage and thereafter, except for a short sojourn at Hanover, he remained at London, continuing to produce operas and oratorios all most till the end of his life.

It is believed that Handel began his education at a gymnasium in Halle. The headmaster of the institution, Johann Praetorius, was an ardent musician and might have influenced young Handel a great deal. But he did not study here for long. His father, who wanted him to take up a career in law, was alarmed at Handel’s knack for music and therefore, withdrew him from the gymnasium. He also made sure no musical instrument entered his house and forbade young Handel from visiting any house that had one. 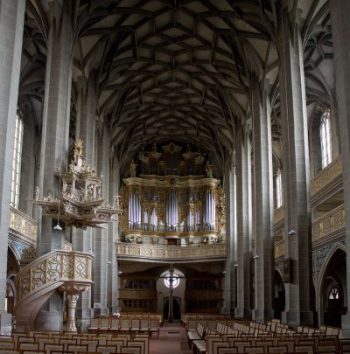 According to many of his biographers, he now managed to install a small clavichord in the attic with his mother’s help and practiced there when his father went to sleep. But very soon, a visit to Weissenfels, at the age of nine, changed the situation for better. Around that time, his father took him to the court of Johann Adolf I, Duke of Saxe-Weissenfels, possibly to see one of his half-brothers under the employment of the Duke. There, unnoticed by all, young Handel made his way to the court organ and began playing on it. The Duke, highly impressed by the rendering, told his father to arrange for his music lessons. Georg Händel, who aspired for a court appointment, could not disregard the suggestion. Therefore, on returning to Halle, he engaged Friedrich Wilhelm Zachow, the church organist as Handel’s music teacher.

In February 1702, in deference to his father’s wishes, Handel enrolled at the University of Halle to study law, but music remained his main passion. In March, he was appointed organist at the Domkirche, a Calvinist Cathedral, for an honorarium of 5 thalers a year and free lodging. Nest year, he found employment as a violinist in the orchestra of the Hamburg Oper am Gänsemarkt. Around this time, Handel also started writing opera, making his debut in early 1705 with ‘Der in Krohnen erlangte Glücks-Wechsel, oder: Almira, Königin von Castilien’. It was an instant success.

In 1706, he left for Italy at the invitation of either Ferdinando de’ Medici or Gian Gastone de’ Medici. George Frideric Handel remained in Italy for approximately three opera seasons, visiting major cities like Florence, Venice, Rome, and Naples, meeting notable musicians like Arcangelo Corelli and Alessandro Scarlatti and his son Domenico. Simultaneously, he continued writing music. Most important among them were two operas, ‘Rodrigo’, written in 1707 and ‘Agrippina’ in 1709. 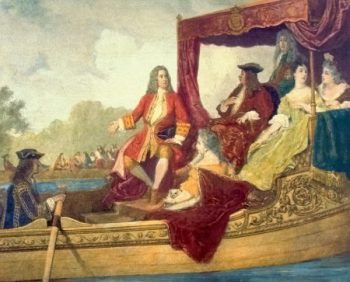 Handel (left) and King George I on the River Thames, 17 July 1717, by Edouard Hamman

Very soon, his mastery over Italian opera made Handel famous internationally. On 10 January 1710, his work was performed in London. In early March, Prince Carl von Neuburg offered him a court position. As he was not yet ready to settle down, he declined the offer. In June 1710, he was appointed Kapellmeister to the elector of Hanover. However, interested in a freelance career, he set out for London sometime towards the end of 1710. There on 24 February 1711, he had his ‘Rinaldo’, an Italian opera especially composed for London, premiered. It was greeted with great enthusiasm. Handel realized that he could have a successful career in England. He began to learn English.

Handel kept traveling between Hanover and london till 1714, when, with the death of Queen Anne, the elector of Hanover, George Louis, was proclaimed King George I of England. The new king arrived in London on 18 September and with that, Handel was no longer required to return to Hanover. He soon found his position secured in the royal court. 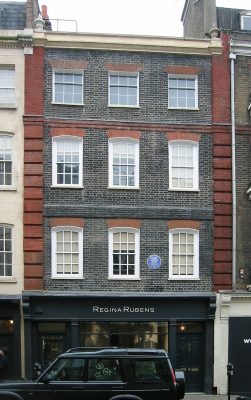 When the Royal Academy of Music was opened in February 1719, Handel was appointed as Master of the Orchestra. Apart from engaging soloist, he was responsible for adapting operas from abroad. ‘Radamisto’, ‘Giulio Cesare in Egitto’, ‘Tamerlano’ and ‘Rodelinda’ are few of operas he wrote for the company. By 1723, Handel set up his own establishment in a house he rented at 25 Brook Street. He lived in this house till his death around twenty-six years later, continuing to create music.

In February 1727, he became a British subject and received appointment as a composer in Chapel Royal. In the same year, he was commissioned to write four anthems for the Coronation of King George II. One of them, ‘Zadok the Priest’, continues to be played at every coronation since then.

George Frideric Handel is best remembered for his 1741 work, ‘Messiah’, an English-language oratorio based on the life of Jesus Christ. The text was drawn both from Old and New Testament, with the final chorus from Book of Revelation. Source of the popular ‘Hallelujah Chorus’, it is one of the most frequently performed oratorios.

Not much is known about Handel’s personal life, which he liked to keep private. He never married, initially leaving his estate to her niece Johanna; but later distributed much of it among other relatives, friends, servants and charitable organizations. Towards the end of 1740s, Handel began to have eye problems, possibly cataract. Although he had it operated, by 1752, he lost his vision completely. Yet, he continued to work till the end.