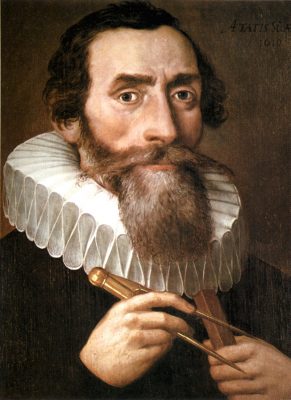 Portrait of Kepler by an unknown artist, 1610

Johannes Kepler (December 27, 1571 – November 15, 1630) was a German mathematician, astronomer, and astrologer who discovered the ovoid movements of the planets around the sun. The first astronomer to state the fundamental laws of planetary motion, Kepler was also known for his works in geometry, optics and philosophy. His significant achievements have been the discovery of the Kepler’s Star, the ‘Astronomia Nova’ and also the ‘Kepler Conjecture’. For being one of the prominent figures in astronomy, a lot of astral elements were named after him such as ‘Kepler’s crater on Mars’, ‘The Kepler Moon crater’ etc. Apart from astronomy, Kepler concentrated on mathematics and the evolution of geometry. He came up with ‘Kepler Triangle’ and the ‘Kepler Problem’, both of which, published in three parts, studied various aspects of geometric progression, characterized by the ‘Pythagorean Theorem’ and the ‘Golden Ratio’. As a part-time amusement, he even studied astrology and published a few works on the subject such as ‘De Fundamentis Astrologiae’ and ‘Dissertatio cum Nuncio Siderio’. He worked for Tycho Brahe, a Danish nobleman, and even served as an advisor to Emperor Rudolph II during his lifetime.

Kepler was a key figure in the 17th-century scientific revolution. He is best known for his laws of planetary motion, based on his works Astronomia nova, Harmonices Mundi, and Epitome of Copernican Astronomy. These works also provided one of the foundations for Isaac Newton’s theory of universal gravitation. 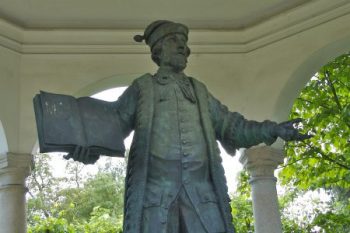 A statue of Kepler in Linz

Kepler was a mathematics teacher at a seminary school in Graz, where he became an associate of Prince Hans Ulrich von Eggenberg. Later he became an assistant to the astronomer Tycho Brahe in Prague, and eventually the imperial mathematician to Emperor Rudolf II and his two successors Matthias and Ferdinand II. He also taught mathematics in Linz, and was an adviser to General Wallenstein. Additionally, he did fundamental work in the field of optics, invented an improved version of the refracting telescope (the Keplerian telescope), and was mentioned in the telescopic discoveries of his contemporary Galileo Galilei. He was a corresponding member of the Accademia dei Lincei in Rome.

The Great Comet of 1577, which Kepler witnessed as a child, attracted the attention of astronomers across Europe

Kepler was introduced to astronomy at an early age, and developed a love for it that would span his entire life. At age six, he observed the Great Comet of 1577, writing that he “was taken by his mother to a high place to look at it.” In 1580, at age nine, he observed another astronomical event, a lunar eclipse, recording that he remembered being “called outdoors” to see it and that the moon “appeared quite red”. However, childhood smallpox left him with weak vision and crippled hands, limiting his ability in the observational aspects of astronomy.

Kepler lived in an era when there was no clear distinction between astronomy and astrology, but there was a strong division between astronomy (a branch of mathematics within the liberal arts) and physics (a branch of natural philosophy). Kepler also incorporated religious arguments and reasoning into his work, motivated by the religious conviction and belief that God had created the world according to an intelligible plan that is accessible through the natural light of reason. Kepler described his new astronomy as “celestial physics”, as “an excursion into Aristotle’s Metaphysics”, and as “a supplement to Aristotle’s On the Heavens”, transforming the ancient tradition of physical cosmology by treating astronomy as part of a universal mathematical physics.

Portraits of Kepler and his wife Barbara in oval medallions

Kepler faced great emotional cataclysms in his lifetime. He married a 23-year-old Barbara Müller, who was widowed twice and had a young daughter. Kepler married Müller on April 27, 1597. In the first year of his marriage, Kepler had two daughters, both of whom died in infancy. The couple also had three more children in the following years. However, Barbara’s health deteriorated and she passed away in 1612.

On October 30, 1613, Kepler remarried. This time, he married a 24-year-old Susanna Reuttinger, after considering 11 matches before her. The first three children born from this marriage, died in infancy. It is said, the second marriage was a happier one than the first one.
In 1615, Ursula Reingold, a woman in a financial dispute with Kepler’s brother Christoph, claimed Kepler’s mother Katharina had made her sick with an evil brew. The dispute escalated, and in 1617 Katharina was accused of witchcraft; witchcraft trials were relatively common in central Europe at this time. Beginning in August 1620, she was imprisoned for fourteen months. She was released in October 1621, thanks in part to the extensive legal defense drawn up by Kepler. The accusers had no stronger evidence than rumors. Katharina was subjected to territio verbalis, a graphic description of the torture awaiting her as a witch, in a final attempt to make her confess. She refused to confess anything. In October 1621, Kepler was able to effect her release. Katharina Kepler died the following year. Throughout the trial, Kepler postponed his other work to focus on his “harmonic theory”. The result, published in 1619, was Harmonices Mundi (“Harmony of the World”).

In his final years, Kepler spent much of his time traveling, from the imperial court in Prague to Linz and Ulm to a temporary home in Sagan, and finally to Regensburg. Soon after arriving in Regensburg, Kepler fell ill. He died on November 15, 1630, and was buried there; his burial site was lost after the Swedish army destroyed the churchyard. Only Kepler’s self-authored poetic epitaph survived the times:

I measured the skies, now the shadows I measure
Skybound was the mind, earthbound the body rests.