Loeb Strauss (he liked the name “Levi Strauss”) was born in Buttenheim in Franconia, Bavaria in 1829. The 18-year-old German immigrant left for New York City together with his family in 1847. There he worked hard with his older brothers Jonas and Louis Loeb in their family dry goods business called “J.Strauss Brothers & Co”.

In 1853, Strauss went to sensational San Francisco looking for his fortune and big money. It was the high peak of the California Gold Rush that started in 1848. Most of the risky prospectors of gold mining in northern California became bankrupts and only few of them were lucky to grow rich. Levi Strauss became famous and wealthy. He was one of the wise moneymakers who provided goods and services to the miners of California.

Firstly he initiated a dry goods wholesale house under his own name. “Levi Strauss & Co” used to import different dry goods – clothes, handkerchieves, rolls of fabric and so on.

The story of the blue jeans goes that both prospectors and miners were often complaining about the easily torn cotton trousers and pockets, that’s why the practical Levi decided to make solid overall pants for the miners and other workers to wear. Levi Strauss was sure that his “waist overalls” (the old name for jeans) would become very popular with miners, ranchers and farmers for their close-to-the-ground line of work. Strauss opened a “wonderful pants of Levi’s” factory in San Francisco. These hard-wearing overalls were fashioned by Levi from a sturdy fabric called serge, made in Nimes, France. Originally called serge de Nimes, the fabric later became known as ‘denim’. 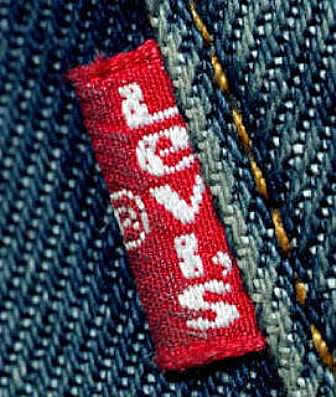 Another story tells that Levi began adding copper rivets at the stress points in his overalls and changed canvas to a heavy blue denim material called genes in France, which became “jeans” in America.

Nevada tailor, Jacob Davis suggested that Levi pay the fee and share the patent of his overalls’ improvement. Davis was one of Levi’s constant customers who purchased rolls of cloth from the company for his own business, Davis could not afford the $81 needed to apply for a patent. Therefore Davis shared with Levi the way he made pants for his customers: by riveting at the points of strain—pocket corners and on the base of the fly.

The successful clothing business wasn’t the only sphere of public life for Strauss. He served as a director of an insurance company, a utility company member, a Jewish community leader, and a contributor to the Pacific Hebrew Orphan Asylum and Home, the Hebrew Board of Relief, San Francisco’s Temple Emanu-el Sisterhood, the University of California and other civic and cultural institutions. He participated in various charitable organizations and helped to fund the gold medal awarded each year to the temple’s best Sabbath School student. Even as his company and fame grew in size, Strauss insisted that his employees and relatives call him Levi, not Mr. Strauss.

Levi Strauss died peacefully at home on September 26, 1902, at the age of 73. The City of San Francisco declared that day a business holiday so that everybody could attend the funeral at Temple Emanu-el. He left his flourishing business to the four nephews—Jacob, Louis, Abraham and Sigmund Stern – and other family members. He was never married. The family has maintained Levi’s philanthropic practices.

Levi’s Denim Blue Jeans are a world-recognizable trademark and best-known emblem of the American Western lifestyle due to the high quality production and grand name of the overalls inventor. Today the legendary company Levi Strauss founded, remains one of the nation’s leading apparel manufacturers. In 2003 “Levi Strauss & Co” celebrated the 150 anniversary of its founding.