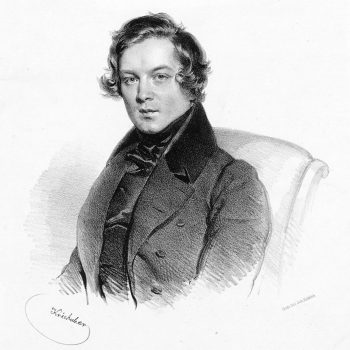 Robert Schumann (born in Zwickau on June 8, 1810 – died in Bonn on July 29, 1856) was a German composer and influential music critic. He is widely regarded as one of the greatest composers of the Romantic era. Schumann left the study of law, intending to pursue a career as a virtuoso pianist. He had been assured by his teacher Friedrich Wieck that he could become the finest pianist in Europe, but a hand injury ended this dream. Schumann then focused his musical energies on composing.

Schumann’s published compositions were written exclusively for the piano until 1840; he later composed works for piano and orchestra; many Lieder (songs for voice and piano); four symphonies; an opera; and other orchestral, choral, and chamber works. Works such as Carnaval, Symphonic Studies, Kinderszenen, Kreisleriana, and the Fantasie in C are among his most famous. His writings about music appeared mostly in the Neue Zeitschrift für Musik (New Journal for Music), a Leipzig-based publication which he jointly founded. 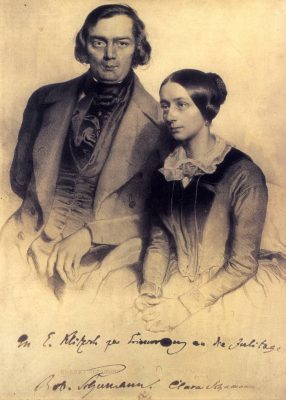 Robert and Clara Schumann in 1847, lithograph with a personal dedication

In 1834, Schumann fell in love and got engaged to 16-year-old Ernestine von Fricken. She was the adopted daughter of a rich Bohemian-born noble. Schumann broke off that engagement, as he grew more and more fond of 15-year-old Clara Wieck. In December, when Clara appeared in Zwickau for a concert, they made mutual declarations of their love. Robert met Clara in Leipzig, in 1830 when he was working under the renowned piano teacher Friedrich Wieck. Clara was his favorite daughter and was already a famous piano prodigy. It is said that that Schumann and Clara were lovers by 1835. Though Clara’s father strongly opposed their relationship, their tryst continued. In 1837, when Schumann sought Friedrich Wieck’s consent to their marriage, he refused.

Schumann married Clara Wieck on 12 September 1840, at Schönefeld after the long and bitter battle with Clara’s father. The dispute was resolved by waiting until Clara reached the legal age and no longer required her father’s consent. Clara acted as an inspiration, critic, and confidant to her husband throughout his life. Robert and Clara had eight children.

In 1840, Schumann married Friedrich Wieck’s daughter Clara, against the wishes of her father, following a long and acrimonious legal battle, which found in favor of Clara and Robert. Clara also composed music and had a considerable concert career as a pianist, the earnings from which, before her marriage, formed a substantial part of her father’s fortune.

It’s not that Schumann detested all of the contemporary composers; there were some like Chopin about whom Schumann famously wrote, “Hats off, Gentleman! A genius!” He also lauded Hector Berlioz for creating music of substance. On the other hand, Schumann disparaged the school of Franz Liszt and Richard Wagner. At that time, Schumann’s associates were eminent composers like Norbert Burgmüller and Ludwig Schuncke (to whom Schumann’s Toccata in C is dedicated). In 1837, Schumann published his Symphonic Studies, a complex set of étude-like variations that he wrote during 1834–1835, and demanded a finished piano technique. During the span of seven years from 1832 to 1839, Schumann concentrated solely on piano. In 1840 alone, he wrote 168 songs, was quite rightly referred to as the Liederjahr or year of song, and hence bears great significance in Schumann’s musical legacy.

During 1850-1854, Schumann composed on variety of genres. However, there is a great dispute among critics regarding the quality of his work at this time. According to a widely held view, “his music showed signs of mental breakdown and creative decay.” In 1850, Schumann succeeded Ferdinand Hiller and was appointed the musical director at Düsseldorf. However, he turned out to be a poor conductor and hence, the composer had to face the opposition from the musicians and the contract was eventually terminated. From 1851 to 1853, he visited Belgium, Switzerland and Leipzig.

Schumann’s symptoms of neurasthenia increased by February 1854. He suffered from angelic visions that were at times replaced by demonic visions. He also feared that he might harm Clara. He attempted his second suicide on 27 February 1854. He jumped into the Rhine River from a bridge. He was rescued by a boatman and himself asked to be taken to a mental asylum. He entered Dr. Franz Richarz’s sanatorium in Endenich, a quarter of Bonn, and remained there until his death on July 29, 1856, when he was just 46. During his confinement, he was not allowed to see Clara. Two days before his death, she finally visited. Though he seemed to recognize her, but couldn’t speak a word.