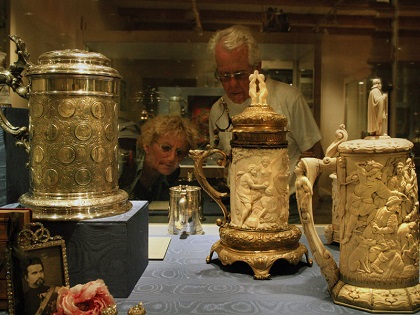 The origins of German beer steins date back to the 14th century. As a result of the bubonic plague and several invasions of flies throughout Europe shortly thereafter, Germany established several laws in the early 16th century requiring that all food and beverage containers (in our case it’s beer steins) be covered to protect their contents. The guild system was firmly entrenched in European society at this time. The pewter guild, combined with the heightened awareness for hygiene among food containers, created an environment in Germany that would ensure the presence of permanently attached pewter lids on stoneware drinking vessels for the next 300 years. By the end of the 19th century, the beer stein was clearly defined as being made in Europe, primarily of stoneware and primarily with a permanently attached pewter lid.

The history of german beer steins includes the development and introduction of several different materials other than stoneware. Pewter was not only used for lids, but also as a primary body material. It was the material of choice throughout large areas of Europe and particularly popular in England. Glass, porcelain and silver beer steins were introduced several hundred years ago as well and are all still available today. Many stein-decorating styles and techniques were developed over the centuries, offering further diversity to this creative, historical, artistic, and ever-evolving gift item. Centuries-old traditions continue to train the skilled hands and eyes that are required to create these steins.

Pewter Fittings
Pewter fittings often help in the dating and pricing of the stein. Prior to 1680, they normally consisted of a domed lid with a tiered finial (a figural representation or common design positioned at the top of the stein), a large, closed, five- ring hinge and small thumblift mounted over the hinge. Soon after 1680, fittings became more massive with large ball-type thumblifts, lid rings, handle reinforcement straps, and five-ring hinge. From 1690 to 1748, fittings had footrings, lid rings, large fancy lids, large ball-thumblifts, and handle reinforcement straps. During the period 1850-65, pewter fittings were reduced to small diameter hinges, lids made of thin rings holding glass or ceramic inserts and fragile thumblifts. From 1875-1914, less expensive steins (stoneware and glass) had fancy pewter lids and thumblifts, while the more expensive ones (like Mettlach) were still made with ceramic inlaid lids.

The closed hinge was used mostly until 1875, when the open hinge came into general use. A shortage of tin and pewter during WWI & WWII, caused many steins to be made with nickel-plated metal lids. Many kinds of hinges and fittings are being used today. Most pewter lids dating from 1960 to present have a velvety, sandblasted texture.

The word stein is a shortened form of Steinzeugkrug, which is German for stoneware jug or tankard. By common usage, however, stein has come to mean any beer container regardless of its material or size that has a hinged lid and a handle.


Earliest Beer Steins
From about 1340 until 1380, a bubonic plague, or Black Death, killed more than 25 million Europeans! As horrible as this historic event was, it prompted tremendous progress for civilization. And, of interest here, it is also responsible for the origin of the beer stein. Recall from above that the distinction between a mug and a stein is the hinged lid. This lid was originally conceived entirely as a sanitary measure. During the summers of the late 1400s, hoards of little flies frequently invaded Central Europe. By the early 1500s, several principalities in what is now Germany had passed laws requiring that all food and beverage containers be covered to protect consumers against these dirty insects. The common mug also had to be covered, and this was accomplished by adding a hinged lid with a thumblift. This ingenious invention was soon used to cover all German beverage containers while still allowing them to be used with one hand. This covered-container law and several other public health laws were enthusiastically passed and vigilantly enforced as a result of public fears about a return of the Black Death.

In the period from Roman times to the 1300s, sanitation had continually declined. During the years of the Black Death, it became obvious to all, with 95% of those in filthy areas dead and only 10% dead in clean surroundings, that the plague was somehow related to unsanitary conditions. The covered-container law was only one in a whole series of sanitary regulations that were passed in Germany after the plague pigpens could not be adjacent to streets, old or diseased meat had to be labeled as such, and beer could be brewed only from hops, cereals, yeast, and water. Strictly enforced regulations concerning the quality and transport of beer in many of the German provinces resulted in a tremendous improvement in the taste of beer, and also had an impact on stein making. Many records show that average beer consumption increased to about two liters per day in many places. Beerhouses, city hall cellars, and taverns began to proliferate in the 1500s.

During the Black Death, churches claimed prayer would end the plague and sometimes announced that Revelations had begun. In either case they lost some of their hold on the public, and more pragmatic scientific views began to prevail. The subsequent rise of science and its marriage with art has been credited with starting the Renaissance. The obvious earthenware experiments involved raising the firing temperature past the usual level of 500 C (900 F). Higher temperatures, however, could not be achieved merely by throwing more wood into the furnace; they required new furnace designs.

The quality and taste of beer continued to improve. Besides offering taste and fellowship, beer was considered to be important for the constitution, with the ability to induce strength, health, and relaxation. From the earliest times right up into the 1800s, many considered beer to be the most effective medicine known the drink from the gods. Although glass beer beakers were used in Roman times, the Church viewed glassmaking as heathenish and suppressed its production during the Middle Ages.

The Napoleonic war and other rebellions of the time so diminished the aristocrats wealth and power that the middle class became the most important market for steins and other artistic products. Porcelain and silver steins continued to be made in the early 1800s, always with the Renaissance and Baroque designs that still appealed to the wealthy. In the early 1800s, the preference of the masses was so clearly for glass and pewter that nearly all of the faience workshops were permanently closed.

By 1850, art instruction consisted entirely of having students copy the forms and designs of the archaeological finds from the Renaissance and Classical periods. The new style that resulted has been called neo-Renaissance and neo-Classical or, more commonly, Historicism.

In the second half of the 1800s, glassmaking techniques had progressed enough to allow molds to also be used to mass-produce glass steins. With the subsequent outbreak of World War I, the materials and labor needed by the pewter industry were converted to use for munitions production, and beer stein making virtually ceased.