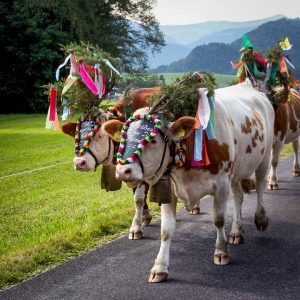 Bavaria may be the home of BMW and Audi, but there are still some age-old rural traditions that surprise even visitors from other parts of Germany. One of which is the annual festival which celebrates the return of the prodigal cows, the Viehscheid. Because here the cows really do come home, every autumn, after having spent their summers up in the mountains.

In September and October the cows and bulls are brought down from the lush mountain pastures to the valley and their winter quarters. An event with a long tradition, which is enjoyed by locals and visitors alike. The Viehscheid (and its close partner the Almabtrieb) are part of the same thing, and both are particularly celebrated in the alpine region of the Allgäu. At the beginning of the summer, when the vegetation has really started to grow up in the mountains, cattle are herded up into high alpine pastures, where the herbal grasses are particularly good for their physical condition. Here they’ll be looked after by a cowherd or team of cowherds and their dogs, who’ll continue to do all the daily milking, fence mending etc necessary, and sometimes also offer milk, cheese and other forms of refreshment to passing walkers. This tradition of almost nomadic pastoralism, still very widespread in eastern Europe, involves around 50,000 cows in Germany.

The sound of bells announces the arrival of the herd. Spectators by the side of the path are in for a colorful treat. It’s that time of year again: as the summer draws to a close, the well-fed cattle with their festive decorations come down from the mountain pastures and back into the valley. The whole village joins in the celebrations.Visitors come from far and wide to experience the spectacle. A brass band plays. The convivial beer tents gradually fill up. Regional costume associations showcase their skills at Schuhplatteln dancing and Alphorn blowing. The aroma of Bavarian specialties wafts through the air. Every year during the Almabtrieb, the ceremonial cattle drive which in the Allgäu is also known as the Viehscheid, young and old get to experience anew a piece of Bavarian tradition. 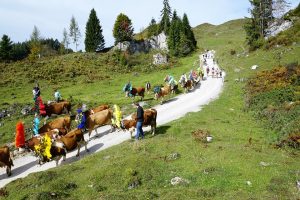 Come the end of September, when it starts to get colder, the herdsmen bring them down again (the Almabtrieb). To celebrate that there were no cattle injuries or losses during their stay high up in the mountains, the leading cow is adorned with flowers, spruce, and sometimes a cross or mirror to deflect evil spirits. All the cows wear big cowbells, polished especially for this occasion. Upon arrival at the village green, the cows are separated from each other (the Viehscheid), the herdsman calls out the name of the owners and each owner takes care of his cows, presumably grateful that his investment has been returned, safe and sound, and hopefully considerably fatter. 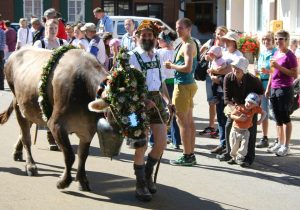 This festive adornment, the crown, goes back to pre-Christian times. The loud bells around the necks of the animals are designed to protect them from hostile demons and bring them safely down into the valley. The traditional craft of the bellsmiths still exists in Bavaria today: Kilian Trenkle, for example, from Pfronten im Allgäu, produces cow bells that the animals wear around their necks during the Viehscheid. There are two kinds of bells: “Glocken”, which are cast, and “Schellen”, which are wrought from plate metal. The resulting combination of fine, high tones and deep, earthy notes lends the day its distinctive sound.

There is always a big party when the cows come home, with a large beer-tent, an orchestra playing, etc. One of the specialities served will be the Hirtenkäse, a distinctive cow’s cheese from the milk of the cows who participated in the Almabtrieb.