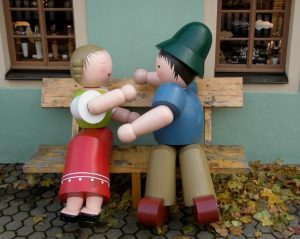 Wooden toys from the Ore Mountains 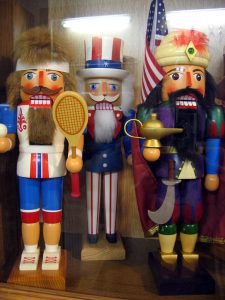 The history of wooden toy-making in the Ore Mountains is closely bound to regional circumstances. The Ore Mountains are located in Central Europe on the border between Germany and the Czech Republic. For many centuries it was a countryside in which the local population eked out a hard existence from the land. Long and harsh winters restricted agriculture; in addition the region had very poor communications. With the onset of ore mining a new line of commerce developed, but the hard labor and high risks involved meant that it was only work for young and strong men. Many were injured or died as a result of accidents. The miners rose early in the morning whilst it was still dark in order to go to work and did not return home again until late in the evening after dark. From those times comes a custom that has survived to the present day, the practice of placing lights in the window. These lights were intended to show the miners the safe way back to the homes of their families.

It was not long before the winnings of silver ore fell in many parts of the mountains and numerous pits had to close. This hardship forced its inhabitants to look for other work and, thanks to abundance of timber in the region, the manufacture of wooden toys became an important secondary source of income. Entire families were engaged in wooden toy-making, especially in the harsh winters. Child labor in conditions of poor lighting and equipment was the rule rather than the exception. The children often had to work more than 12 hours a day. Families developed a high degree of specialization. For example, an experienced turner would be working on turning animal shapes (Reifendrehen), another man carved the animal figures out of it and another family took over the painting and the manufacture of small boxes. Earnings from the individual steps in the process were very low. Production was usually bought by traveling merchants who used their position without mercy, to force down the prices. The majority of these products was taken to the toy markets of Nuremberg and redistributed from there. The formation of associations and cooperatives (such as Dregeno) was in order to ensure a minimum level of income.

The logo of the craftsmen is a miner on a rocking horse.

The Smoking Man (or Räuchermann) has been a Christmas tradition in the Ore Mountains since 1850, and his popularity has only increased over the centuries. The Smoking Men are little wooden figurines stuffed with incense, that blow smoke out through their mouth when lit. Smoking Men are modeled on father Christmas, miners, craftsmen, foresters or native townsfolk of the Ore Mountain region. In fact, don’t be surprised to see Incense Smokers in the shape of houses, dragons or dinosaurs! Incense for Smoking Men come in a variety of fragrances, including pine, honey and cinnamon, among others. There is even a museum dedicated to Smoking Men in the town of Sehmatal-Cranzahl. 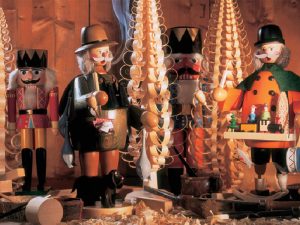 Nutcrackers are the star attraction of Christmas markets all across the country, but their origin is believed to be the Ore Mountains. For over 150 years, the skilled artisans of this region have laboriously hand-crafted these beauties in an astounding range of shapes, sizes and styles. Popular subjects are famous personalities, soldiers, foresters, miners and doctors, but the list goes on and on. 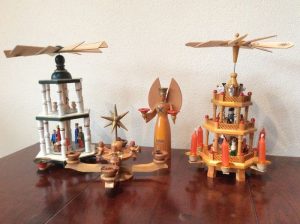 Wooden Christmas pyramids are an essential part of households in the Ore Mountains. When the candles in the pyramid are illuminated, the tiers of the pyramid turn slowly, creating a beautiful play of light and shadow in the room. Most Christmas markets in this region have at least one towering Christmas pyramid. These pyramids are available in several sizes (from one-tiered to six-tiered or taller), price ranges and with varied kinds of figurines.