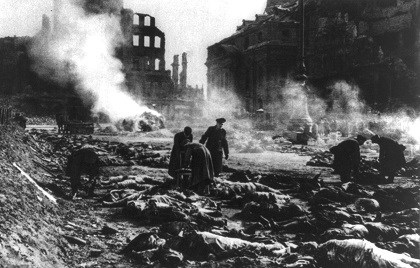 I would like to share with you one more episode of my life. Let’s fast-forward to Berlin. The year is 1944.

Bombings had become the order of the day & so had air raids. In April, our suburb was under attack & bombs were detonating everywhere with earsplitting blasts as if all the houses were going to be leveled. People outside were screaming “Fire, fire!” but no one dared to leave their shelter to help. The whole area was trembling violently like an earthquake under the intensity of the repeated bombing, until there was a deafening quietness, & then the “all clear” signal sounded.

One of my neighbor’s houses had taken a direct hit & stood in flames, spreading an infernal heat. The women rushed for garden hoses, but the front lawn was gone. A monstrous crater took its place, but worse than that, the water had somehow been cut off. Of course the fire department only responded to fires in public buildings & we were left to our own resources. Our neighbors managed to pull out some luggage & bedding at the last minute. Then they sat on the lawn among their rescued belongings, looking rather forlorn. Numb & in total shock, they helplessly watched the flames devouring their home with all of its beautiful antique furniture, paintings & memories, until it finally collapsed with an ear-splitting crash. All was lost except for their few possessions in the suitcases, which looked like a treasure to them.

We didn’t escape damage either, but that’s another story!

You know, the positive spirit & jokes kept us going. I will share one more with you:

A man appears at the registrar’s office. “I want my name changed.” “Oh, but what is your name?” asks the official. “My name is Adolph Stinktier (skunk).” “I understand,” says the official. “How embarrassing. Would you prefer to be a Mr. Miller or Meyer or ..?” “No, no,” interrupts the man. You misunderstand completely. I do not mind the ‘Stinktier’ at all, but I do not want to be an ‘Adolf’ anymore!”

There isn’t enough space here to talk about my entire life. During the U.S. Army occupation we survived by my working as a cook in a military officers mess. Unfortunately I had no experience & only knew how to cook soups where the main ingredient was water. But where there’s a will, there’s a way! If you want to follow more of my adventures, I invite you to read excerpts from my book Laughter Wasn’t Rationed at http://www.tricorpress.com. This is my publisher’s website & you can also leave messages for me there. I hope you will also enjoy the many photos.

It has been a pleasure to share a few of my experiences with you. I do hope that other people may do the same. Good-bye for now & Auf Wiedersehen!