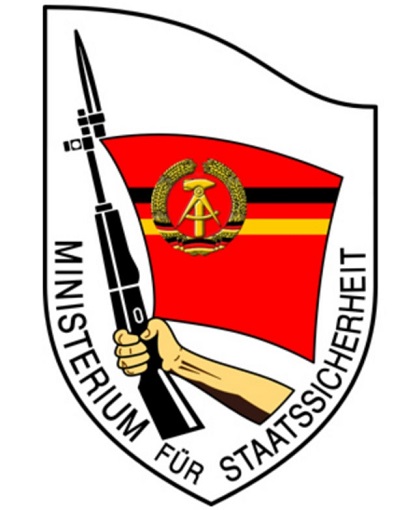 The most important instrument employed by East German authorities to guarantee their absolute rule was the State Security Service (Staatssicherheitsdienst, commonly referred to as the Stasi). Founded in early 1950 as the secret service branch of the Ministry for State Security (Ministerium fuer Staatssicherheit–MfS), the Stasi came to exercise almost complete control over the population of the GDR. During the first five years of its existence, Stasi personnel were trained by Soviet instructors. In addition to its surveillance of the East German population–which was carried out with sinister thoroughness up until the final days of the GDR–the Stasi conducted extensive espionage activities in the West, particularly in the FRG.

Aside from its approximately 100,000 full-time employees, the Stasi could also rely on the assistance of nearly 2 million civilian spies, or so-called informal employees (Informelle Mitarbeiter –IM), who reported regularly from domestic listening posts or from abroad. Experts agree that before its dissolution in 1990, the Stasi had developed the most perfect spying system ever devised to watch over its own citizens. It had truly realized the idea of the “glass-citizen,” whose every activity was known to and controlled by the state. In Stasi headquarters in East Berlin, detailed information on individual citizens was collected in huge archives, which survived, largely intact, the downfall of the East German state. 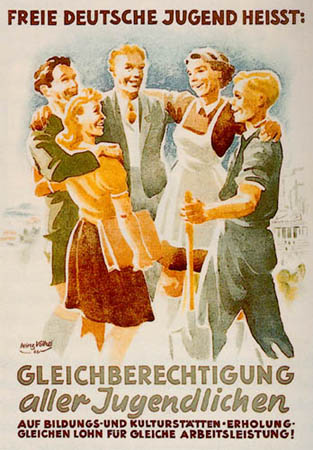 An equally important role in building a permanent power base for the SED was played by mass organizations. One of the most important was the Free German Youth (Freie Deutsche Jugend–FDJ), founded in March 1946, in which young people between the ages of fourteen and twenty-five were to be indoctrinated as members of a new socialist society. Together with its suborganization for youngsters from six to fourteen years of age, the Young Pioneers–later called the Pioneer Organization “Ernst Thälmann,” in memory of the chief of the KPD during the Weimar Republic, who was killed in a concentration camp–the FDJ soon became an effective instrument for influencing the coming generations. An important part of its influence was that membership in the FDJ soon determined access to institutions of higher learning, recreation and sports facilities, and ultimately career opportunities.

Another important mass organization was the Free German Trade Union Federation (Freier Deutscher Gewerkschaftsbund–FDGB), which attempted to motivate the workforce to achieve production goals and also provided members with opportunities for inexpensive vacations at FDGB-owned seashore resorts. Similarly, the interests of women were served by the Democratic Women’s Federation of Germany.

By the end of 1947, all facets of society were organized in associations and groupings under the control of the SED. The GDR authorities also sought to deprive potential enemies within the state of the traditions and institutions upon which the state and society had been founded. A primary target for complete transformation was the court system. Judges and attorneys soon came to be used as mere instruments to carry out Marxist-Leninist goals. The legality of actions was determined by the political leadership.

The SED also declared the traditional administrative division of East Germany into five Länder an obstacle to “efficient” governance. The five Länder, all grown out of long historical traditions, were abolished and fourteen administrative districts established. This measure gave the central government in East Berlin much greater control over the activities in these districts, which were now much smaller, and, equally important, allowed it to break with another aspect of Germany’s despised bourgeois history.

Related articles:
The Ulbricht Era, 1949-71
Planned Economy in GDR
The Warsaw Pact and the National People’s Army
The Berlin Wall
The “Socialist State of the German Nation”