West Germany’s relations with the East European states had virtually stagnated since the establishment of the Hallstein Doctrine in the mid-1950s. In 1970, in an attempt to lessen tensions in Europe, Brandt and his FDP minister for foreign affairs, Walter Scheel, agreed to negotiate with the communist bloc. For the first time since 1948, the top politicians of the FRG and the GDR held talks, with Brandt and the East German prime minister, Willi Stoph, meeting in Erfurt in East Germany and Kassel in West Germany. Although the talks produced no concrete results because Brandt refused to recognize the GDR as a sovereign state, communication lines were reopened.

After coordinating policy goals with the United States, the FRG also entered negotiations with the Soviet Union on a treaty normalizing relations, in which both countries renounced the use of force. The FRG agreed to make no territorial claims, and it recognized de facto the Oder-Neisse border and the border between the FRG and the GDR. FRG negotiators, however, insisted that such agreements did not alter the West German position on future reunification of the country and that the responsibilities of the Four Powers in Germany remained unchanged by the treaty. They also linked the signing of the treaty to a Soviet promise to open talks on normalizing the Berlin situation. After the Soviet Union had agreed to these conditions, the Treaty of Moscow was signed in August 1970. The agreement opened the road to negotiations with other countries of the Soviet bloc.

In December 1970, after ten months of complicated negotiations, the FRG and Poland signed the Treaty of Warsaw. The treaty contained essentially the same points as the Treaty of Moscow on the question of Poland’s western border, the renunciation of territorial claims by the FRG, and the ongoing responsibilities of the Four Powers. In return, Poland agreed to allow ethnic Germans still in Poland to emigrate to the FRG. During the subsequent debates on the ratification of the two treaties, the CDU/CSU and part of the FDP made their consent contingent on the formulation of a strong statement by the Bundestag underscoring Germany’s right to reunification in self-determination and of the Allies’ responsibilities for Germany and Berlin. 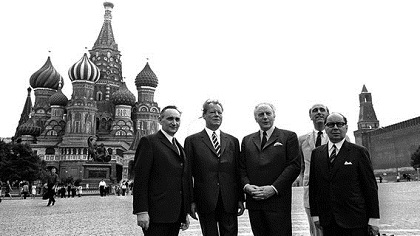 Concurrent with the negotiations on the treaties of Moscow and Warsaw, the Four Powers undertook to end disagreement about the status of Berlin in talks that ultimately led to the Four Power Agreement (also known as the Quadripartite Agreement) of September 1971. The talks, which began in March 1970, got off to a difficult start because the Western Allies and the Soviet Union were deeply divided over their basic interpretation of the “status of Berlin.” After they “agreed to disagree” on this point, progress was finally made, and all sides concurred that the status quo of Berlin should not be changed unilaterally.

The Soviet Union made two very important concessions: traffic to and from West Berlin would be unimpeded in the future, and the existing ties of West Berlin to the FRG were given de facto recognition. Soviet officials, however, insisted that West Berlin was not to be considered a territory belonging to the FRG and therefore was not to be governed by it. Furthermore, the Soviet Union made the conclusion of the agreement among the Four Powers contingent on the signing of the Treaty of Moscow between the FRG and the Soviet Union, which was still under negotiation. They thereby established the same linkage that the FRG had demanded, but in reverse.

Following the negotiations on traffic between the FRG and the GDR, both sides recognized the feasibility of arriving at a more comprehensive treaty between the two German states. Talks began in August 1972 and culminated in December 1972 with the signing of the Basic Treaty. In the treaty, both states committed themselves to developing normal relations on the basis of equality, guaranteeing their mutual territorial integrity as well as the border between them, and recognizing each other’s independence and sovereignty. They also agreed to the exchange of “permanent missions” in Bonn and East Berlin to further relations.

After the bitterly contested approval of the Basic Treaty by the SPD-FDP-controlled Bundestag in May 1973, a political decision that the CDU/CSU had warned against for decades became a reality: West Germany’s de facto recognition of East Germany as a separate state. To many conservatives, the Basic Treaty represented the failure of the Hallstein Doctrine and a final blow to the possibility of Germany’s reunification. Bavaria filed a suit in the Federal Constitutional Court in Karlsruhe to prevent the treaty’s implementation, but the court held the treaty to be compatible with the provisions of the Basic Law. As a result of the treaty, the FRG and the GDR became members of the UN in June 1973.

Among the states to the east, Czechoslovakia remained the only neighbor with which West Germany had not yet normalized diplomatic relations. Negotiations with this country proved to be considerably more difficult than those with the Soviet Union or Poland. The main obstacle was a difference in interpreting the Munich Agreement of September 1938. On the one hand, the FRG maintained that the accord itself had to be considered legally valid but that the occupation of Czechoslovakia in March 1939 had voided its provisions. Czechoslovakia, on the other hand, insisted that the accord be considered void from the very beginning. Both sides finally agreed that the accord was to be considered void, but that all legal proceedings in the occupied territory between 1938 and 1945 were to be upheld. Once this basic understanding had been reached, the treaty with Czechoslovakia, known as the Treaty of Prague, similar in content to the Treaty of Warsaw, was signed in December 1973, and diplomatic relations were established. Shortly thereafter, West Germany exchanged ambassadors with Hungary and Bulgaria.