The GDR leadership welcomed protests against weapons and war as long as they occurred in the FRG. However, when a small group of East German pacifists advocating the conversion of “swords into plowshares” demonstrated in 1981 against the presence of Soviet missiles on GDR soil, as well as against the destruction of the environment by the dumping of industrial waste and the use of nuclear power generally, they were arrested, prosecuted, and in some cases expelled from the GDR. Church organizations in the GDR–considered subversive by their mere existence–and individual pastors who protected and defended demonstrators at risk to their own safety became targets of increased surveillance by the Stasi, as did individual churchgoers, who by 1988 were frequently arrested and interrogated.

The mounting nervousness of the GDR leadership became evident in June 1987 when large crowds of East Berlin youth gathered on their side of the Wall, along with young people from all over the GDR, to hear two rock concerts being held in West Berlin near the Reichstag building. When the crowd broke into frenzied cries for freedom and unification, police cleared the area, arresting and forcibly removing Western news reporters filming the incident.

In the local elections of May 17, 1989, the “united list” led by the SED received 98.9 percent of the vote, obviously the result of massive manipulation, which enraged large segments of the population who had previously remained silent. In the next months, persistent public complaints against the prevailing living conditions and lack of basic freedoms, voiced by church groups and by opposition groups, inspired the population to take to the streets in large numbers. The largest of the new opposition groups was the New Forum, founded in September 1989 by Bärbel Bohley, Jens Reich, and others. 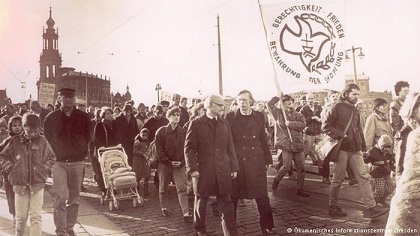 During the fall of 1989, mass demonstrations of several hundred thousand people were taking place, first in what soon became traditional Monday demonstrations in Leipzig and later in Berlin and other large cities. For the first time, GDR rulers realized that they were losing control: the demonstrations were too massive to be quelled by intimidation or even mass arrests; and shooting at the demonstrators was out of the question because of the sheer size of the crowds and the absence of Soviet support for draconian measures.

Beginning in the summer of 1989, the regime was threatened by another development. Among the thousands of GDR citizens that traveled by car on “vacation” to the socialist “brother country” Hungary, some 600 were successful in crossing illegally into Austria, where they were enthusiastically welcomed before traveling on to the FRG. Others wanting to escape the GDR took refuge in the embassies of the FRG in Budapest, Prague, and Warsaw. On September 11, Hungary legalized travel over the border to Austria for GDR citizens heading for the FRG, enabling 15,000 to take this route within a few days. Eventually, the GDR leadership was forced to allow special trains to carry thousands of GDR refugees who had received permission to emigrate to the West after taking sanctuary in the FRG’s embassies in Prague and Warsaw. As the trains traveled through the GDR, many more refugees tried to climb aboard, so the government refused to further allow such transports.

Related articles:
The Honecker Era, 1971-89
The Conference on Security and Cooperation in Europe
The New East German Constitution and the Question of Identity
Relations Between the Two Germanys
The Last Days of East Germany