As with the birth of the FRG, the formation of a separate nation-state in the Soviet zone also took only a few years. In late 1947, the SED convened the “German People’s Congress for Unity and a Just Peace” in Berlin. To demonstrate the SED’s claim of responsibility for the political future of all Germans, representatives from the Western zones were invited. The congress demanded the negotiation of a peace treaty for the whole of Germany and the establishment of a German central government. An SED-controlled organization was founded to win support for the realization of these demands in all occupation zones.

The Second People’s Congress, held in March 1948, proposed a referendum on German unity, rejected the Marshall Plan, and recognized the Oder-Neisse border, which separated the Soviet zone from territory that was administered by Poland but that had once been part of Germany. Thereafter, few Western politicians had any doubts about the goals of the SED-sponsored congress. The congress elected a People’s Council and created a constitutional committee to draft a constitution for a “German Democratic Republic,” which was to apply to all of postwar Germany. The constitutional committee submitted the new constitution to the People’s Council, and it was approved on March 19, 1949.

The Third People’s Congress, its membership chosen by the SED, met in May 1949, just after the ending of the Berlin blockade. Apparently reacting to current events in the Western zones, where the Basic Law establishing the West German government in Bonn had just been approved, the congress approved the draft constitution of the German Democratic Republic (GDR, or East Germany).

A new People’s Council, elected during the Third People’s Congress, was convened for the first time on October 7, 1949, and the constitution of the GDR went into effect the same day. The Soviet military administration was dissolved, and its administrative functions were transferred to East German authorities. The People’s Council was renamed and began its work as the Volkskammer (People’s Chamber), the parliament of the GDR. A second parliamentary chamber, the Länderkammer (Provincial Chamber), consisting of thirty-four deputies, was constituted by the five Land diets on October 11, 1949. Wilhelm Pieck became the first president of the GDR on the same day, and the newly formed cabinet, under the leadership of Otto Grotewohl, was installed on October 12, 1949. 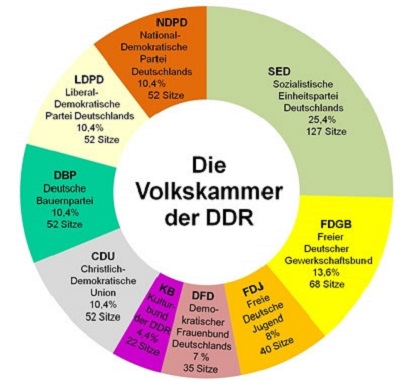 According to the first constitution of the GDR, its citizens enjoyed certain basic rights, even the right to strike. In reality, however, there was little freedom. According to the constitution, both the Council of State (Staatsrat) and the Council of Ministers (Ministerrat) were elected by and responsible to the Volkskammer. All parties and mass organizations represented in this body were united in the National Front, under the ideological leadership of the SED. The Volkskammer was a mere forum for speeches and mock debates. In reality, all policy matters were decided by the Politburo of the SED, on which most important functionaries of the Council of State and the Council of Ministers had a seat.

The party structure of the SED had been reorganized in the image of the Communist Party of the Soviet Union even before the foundation of the GDR, and the system of nomenklatura, with its strict system of ideological education and selection of candidates for all functions in party and state, was introduced. Within a few months, East Germany became a model for all other satellites of the Soviet Union.

Related articles:
Postwar Occupation and Division
The Nuremberg Trials and Denazification
Postwar Political Parties in Germany
The Creation of the Bizone
The Birth of the Federal Republic of Germany