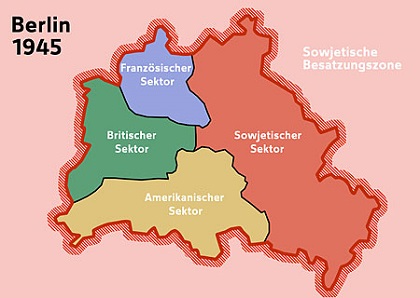 By early 1946, the Western Allies–the United States and Britain in particular–had become convinced that Soviet expansionism had to be contained. The Soviet Union’s seizure of Polish territory and the drawing of the Oder-Neisse border (which gave formerly German territory to Poland), its antidemocratic actions in other countries occupied by Soviet forces, and its policies toward areas such as Greece and Turkey persuaded Western leaders that the Soviet Union was aiming for communist domination of Europe. Churchill’s use of the expression “Iron Curtain” to describe the Soviet cordoning off of a sphere of influence in Europe illustrated a basic change in attitude toward Soviet intentions on the part of Western leaders. As a result of this change, Germany came to be seen more as a potential ally than as a defeated enemy.

The change in attitude led United States officials to take a more active role in Germany. A notable early example of this policy change was a speech given in Stuttgart in September 1946 by the United States secretary of state, James F. Byrnes, proposing the transfer of administrative functions from the existing military governments to a single civilian German administration. Byrnes stated that the United States had not defeated the Nazi dictatorship to keep Germans suppressed but instead wanted them to become a free, self-governing, and prosperous people. The speech was the first significant indication that Germany was not to remain an outcast but was, according to Byrnes, to have “an honorable place among the free and peace-loving nations of the world.”

Neither the Soviet Union nor France desired a revitalized Germany, but after intensive negotiations, a unified economic zone, the Bizone, consisting of the United States and British zones, was proclaimed on January 1, 1947. After a difficult beginning, the Bizone proved itself a success, and its population of 40 million began to benefit from an improving economy. Only in the spring of 1949, after a period of sustained economic growth, did the French occupation zone join the Bizone, creating the Trizone.

In mid-1947 the European Recovery Program, or Marshall Plan as it is more widely known, was announced. The plan’s aim was to stimulate the economies on the continent through the infusion of large-scale credits for the promotion of trade between Europe and the United States. The United States stipulated only that Europe’s economy was to be united and that Europeans were to participate actively in the administration of the program. The Soviet Union suspected that the proposal was a means to prevent it from harvesting the fruits of the victory over fascism. Deeming the proposal a direct affront to its communist ideology by “American economic imperialism,” the Soviet Union promptly rejected participation in the program, as did the East European states, obviously acting on Soviet orders. 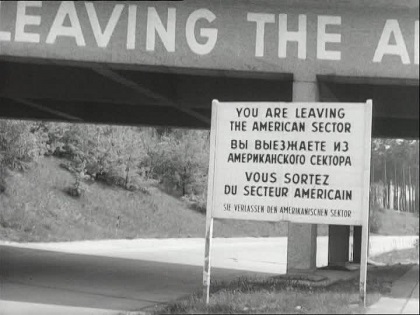 To fulfill the precondition of economic cooperation in Europe, sixteen Western countries joined the Organization for European Economic Co-operation in early 1948. In April 1948, the United States Congress approved the Foreign Assistance Act, which arranged the provision of aid. Shortly thereafter, industrial products, consumer goods, credits, and outright monetary gifts started to flow into the impoverished economies of Western Europe. Cities, industries, and infrastructure destroyed during the war were rapidly rebuilt, and the economies of the war-torn countries began to recover. In the Western zones, aid from the Marshall Plan laid the foundations for the West German “economic miracle” of the 1950s.

A functioning currency system was also needed for a growing economy. The war economy of the National Socialist government had created an oversupply of currency not matched by a supply of goods. To combat the resulting black-market economy, especially noticeable in large cities, and to aid economic recovery in western Germany, a central bank was founded and a currency reform was proclaimed on June 19, 1948. The reform introduced the deutsche mark. In exchange for sixty reichsmarks, each citizen received DM40. Additionally, controls over prices and basic supplies were lifted by authorities, thus abruptly wiping out the black market.

The swift action of the Western powers took the Soviet authorities by surprise, and they quickly implemented a separate currency reform for their zone and all of Berlin. The Western powers, however, had already ordered the distribution of deutsche marks in their sectors of the city. This measure, which for the Soviet Union represented the culmination of the Western policy to undermine Soviet efforts to build a socialist society in its zone, produced a sudden dramatic reaction, the Soviet blockade of Berlin.

On June 24, 1948, Soviet troops blocked all road and rail connections to West Berlin. Within a few days, shipping on the Spree and Havel rivers was halted; electric power, which had been supplied to West Berlin by plants in the Soviet zone, was cut off; and supplies of fresh food from the surrounding countryside were suddenly unavailable. The Four Power status of Berlin, agreed upon by the Allied victors, had not included any provisions regarding traffic by land to and from Berlin through the Soviet zone. It had, however, established three air corridors from the Western zones to the city.

The three Western powers acted swiftly: an airlift of unprecedented dimensions was organized to supply the 2.5 million inhabitants of the Western sectors of Berlin with what they needed to survive. The United States military governor in Germany, General Lucius D. Clay, successfully coordinated the airlift, which deployed 230 United States and 150 British airplanes. Up to 10,000 tons of supplies were flown in daily, including coal and other heating fuels for the winter. Altogether, about 275,000 flights succeeded in keeping West Berliners alive for nearly a year.

The Soviet Union had not expected such Western resolve. Failing in its attempt to starve the Western Allies out of Berlin, it lifted the blockade on May 12, 1949. The Western Allies, led by the United States, had stood their ground without provoking armed conflict. Although the blockade had ended, its effects on Berlin were lasting. By June 16, 1948, realizing that it would not achieve its goal of a socialist Germany, the Soviet Union withdrew from the ACC, prompting the Western Allies to create a separate administration for their sectors. At the end of 1948, two municipal administrations existed, and Berlin had become a divided city. A more significant effect was perhaps that, in Western eyes, Berlin was no longer seen as the capital of Hitler’s Germany but rather as a symbol of freedom and the struggle to preserve Western civic values.