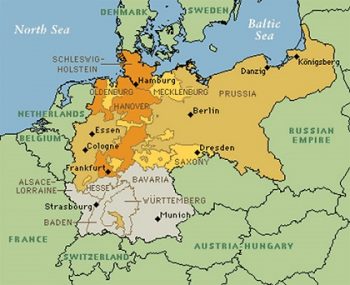 It was not possible for Metternich and his allies to suppress completely the desire for liberal reforms, including the establishment of constitutional parliamentary government, economic freedom, and civil liberties. Some of these reforms had already been under discussion during the eighteenth-century Enlightenment, and awareness of their desirability had spread during the Napoleonic era. In addition, the economic reforms introduced into the Rhineland by France had taken hold. The business class that formed after 1815 pressed for abolition of restrictive trade practices favored by traditional handicraft guilds. Businessmen also sought a common currency and system of measurements for Germany, as well as a reduction of the numerous tolls that made road and river travel expensive and slow.

During the 1820s, significant progress was made in reducing customs duties among German states. At Prussian instigation, the Zollverein (Customs Union) began to form, and by the mid-1830s it included all the most important German states except Austria. Prussia saw to it that its chief rival within Germany was excluded from the union. Vienna, for its part, did not realize at this early point the political and economic significance of intra-German trade.

Many of Germany’s liberal intelligentsia–lower government officials, men of letters, professors, and lawyers–who pushed for representative government and greater political freedom were also interested in some form of German unity. They argued that liberal political reforms could only be enacted in a larger political entity. Germany’s small, traditional states offered little scope for political reform.

Among those groups desiring reform, there was, ironically, little unity. Many businessmen were interested only in reforms that would facilitate commerce, and they gave little thought to politics. Political liberals were split into a number of camps. Some wished for a greater degree of political representation, but, given a widespread fear of what the masses might do if they had access to power, these liberals were content to have aristocrats as leaders. Others desired a democratic constitution, but with a hereditary king as ruler. A minority of liberals were ardent democrats who desired to establish a republic with parliamentary democracy and universal suffrage. 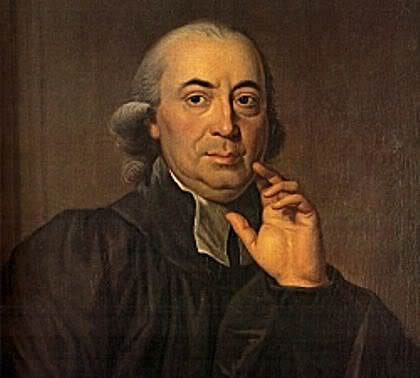 The ideal of a united Germany had been awakened within liberal groups by the writings of scholars and literary figures such as Johann Gottfried Herder (1744-1803) and by the achievements of French nationalism after the revolution. France’s easy victories over Germany’s small states made the union of a people with a common language and historical memory desirable for practical reasons alone. Others were impressed by the political and commercial accomplishments of Britain, which made those of the small German states seem insignificant. Some writers warmed to romantic evocations of Germany’s glory during the Middle Ages.

Many members of Germany’s aristocratic ruling class were opposed to national unity because they feared it would mean the disappearance of their small states into a large Germany. Metternich opposed a united Germany because the Habsburg Empire did not embrace a single people speaking one language, but many peoples speaking different languages. The empire would not easily fit into a united Germany. He desired instead the continued existence of the loosely organized German Confederation with its forty-odd members, none equal to Austria in strength. Prussia’s kings and its conservative elite sometimes objected to Austria’s primacy in the confederation, but they had little desire for German unification, which they regarded as a potential threat to Prussia’s existence. 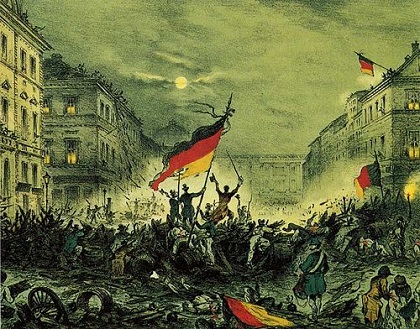 Prussia mainly had a German population, this was one of the several advantages that would help it form a strong German state. A Berlin riot forced a constitutional convection to change and write a liberal constitution for the kingdom. This event helped pave the way for unification.

Germany’s lower classes–farmers, artisans, and factory workers–were not included in the discussions about political and economic reform. Germany’s farmers had been freed to some degree from many obligations and dues owed to the landowning aristocracy, but they were often desperately poor, earning barely enough to survive. Farmers west of the Elbe River usually had properties too small to yield any kind of prosperity. Farmers east of the Elbe often were landless laborers hired to work on large estates. Artisans, that is, skilled workers in handicrafts and trades belonging to the traditional guilds, saw their economic position worsen as a result of the industrialization that had begun to appear in Germany after 1815. The guilds attempted to stop factory construction and unrestricted commerce, but strong economic trends ran counter to their wishes. Factory workers, in contrast, were doing well compared with these other groups and were generally content with their lot when the economy as a whole prospered.


Related articles:
The German Confederation, 1815-66
The Revolutions of 1848
The Restoration of Germany