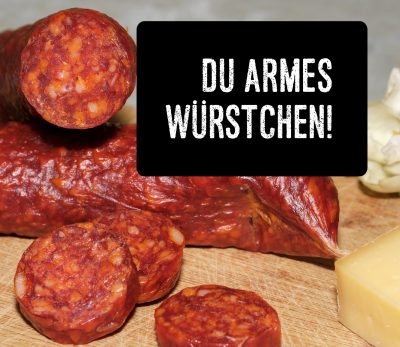 These expressions will have your mouth watering! It’s impossible in one article to discuss all the idioms in German that refer to food. But we can look at some of the most common ones with the literal translation and the meaning.

Literally: He thinks he gets an extra sausage.

Does he think he’s special? Like he gets an extra sausage? We all know someone like this.
2. Du armes Würstchen!

You have a cold! Oh you poor little sausage. Let me make you some soup. (Careful, as this one is also frequently used condescendingly, which I have to say seems extraordinarily appropriate.)

Pay no mind to Sally over there. She’s just acting the insulted sausage: pouting, because she didn’t get her way.

Literally: To let someone take the sausage off your bread.

Stand up for yourself! Don’t let anyone take the sausage off your bread. You’re too good to be taken advantage of like that.

Literally: That is sausage to me.

I don’t care about that at all. Frankly, my dear, I don’t give a sausage.

She might want to rethink the size of her clothing. She looks a bit like a stuffed sausage in that top.

Literally: It’s about the sausage.

Okay now, there are two minutes left in the game! It’s crunch time people! It’s all about the sausage!

Literally: Everything has an end, only the sausage has two.

Literally: To talk around the hot soup/porridge.

He simply will not get to the point. He keeps talking around the hot porridge/ hot soup, or, as we say in English, beating around the bush.

Literally: To smear honey around the mouth.

Before you ask Tim for that favor, make sure you give him lots of compliments – you know, smear honey around his mouth. (English equivalent: “to butter someone up.”)

If I get another passive aggressive email from Bob I swear I will tear him a new one. I will take him to the cleaners. I will gut him like a Christmas goose.

Little Clara is celebrating her fourth birthday today. She’s not but a wee little thing, barely three cheeses high! I don’t know what it is, but I just love this one. It literally refers to the height of three wheels of cheese stacked on top of each other.