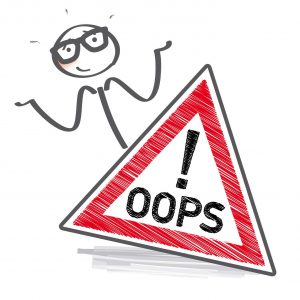 There is nothing wrong with making mistakes – the point is to learn from them when you make them so you can avoid making them again and come yet one step closer to proficiency. Two of the common errors that beginners typically make are: first, those garbled sentences that you can avoid only by learning whole new structures and making sure you remember the right words and grammar. The second is the near misses: those that you can quickly fix and avoid in the future because what you are saying is so almost correct. Here are some tips to prevent making some of the most frequent errors made by beginning learners of German.

German grammar endings can be difficult to use. Imagine you’re enjoying a wonderful afternoon Kaffee und Kuchen (coffee and cake) session with your friend and you want to compliment her awesome Streuselkuchen (heavenly crumble cake).
You want to say ‘this is delicious!’, but how the heck do you say “this” again? It is, diese? dieses? dies? or dieser? What is even the gender of a streuselkuchen?

Spare yourself all the stress and sound super German by simply using the two expressions das da and das hier, which means “this thing here” and “that thing over there” respectively. They’re pretty independent of gender and will work for any singular word.

There are two ways of saying that something happened in a certain year, and neither of them contains the word ‘in’. You can either use the expression im Jahr (in the year of), or you can say the year, i.e. just the number.

3. When talking about languages, use ‘kann’

This is just another way to be more efficient with your German language skills.

In Germany, the temperatures can get high in the summer and low in the winter, so it’s handy to know how to express your feelings about the temperature.

While heiß (hot), warm (warm) and kalt (cold) are the correct words to use for “hot” and “cold”, using them with ich bin will mean you’re telling people that you’re a hot or cold person. When you’re talking about how you’re feeling in the moment, simply replace the words ich bin with mir ist:

5. Watch out for the time

Germans say the time in two different ways. In schedules and formal environments, you will often hear the 24-hour clock times said out loud, as in Der Zug geht um 19 Uhr 45. (The train is leaving at nineteen hundred hours and forty-five). Once you get used to this, it’s a great way to avoid misunderstandings.

The other way of telling the time involves the words viertel (quarter) and halb (half) just like in English, but beware, when Germans say a time as halb, they actually mean one hour earlier than English speakers. This is because Germans think of half TO the hour, or the hour being half full.

So, remember: Half fünf is actually half past four.

In English, you can simply call a friend a friend. But in German, watch out because the words Freund and Freundin can mean either a platonic friendship or a romantic relationship.

It’s common to use mein/meine (my) with the word Freund/Freundin. Be aware that this is ambiguous. It can mean a friend but often Germans will assume you are talking about a boyfriend or girlfriend. If you’re trying to impress a potential date when you drop a cool line about mein Freund (my boyfriend), things may not work out the way you liked.

So, how do you clear up your relationship status? Here are few tips:

When you want to say “my friend” as in “my buddy”, use the expressions ein Freund von mir (a friend of mine – male) and eine Freundin von mir (a friend of mine – female).
If it’s one of your besties, you can also say mein bester Freund (my best friend – male) or meine beste Freundin (my best friend – female).
The third way to make it clear that a friendship is platonic is to name that friend when you’re talking about them, for example, meine Freundin Daniela.

Here are some examples to help you clear it up:

The German language does have a future tense which is not very difficult to use. However, in practice, most German speakers don’t actually use a future tense at all. When speaking the German language, I often hear learners tell me things like Ich werde am Wochenende nach Koblenz fahren (I will go to Koblenz at the weekend). It not incorrect German, but it feels complicated and doesn’t sound right..

The signal am Wochenende (at the weekend) tells your conversation partner that you’re referring to the future, so most native speakers will simply say Ich fahre am Wochenende nach Koblenz to express the same thing.

Language evolves to make communication as efficient as possible, so on this occasion, you can stick with using the present tense even when you’re talking about the future.

8. Put the verb in second position

The English language has a nice and firm sentence structure: Subject-verb-object. In German, the first sentences you learn are simple. They follow that same structure, so you may assume that the rule is the same.

But in fact, our word order is all about one big star diva called the verb. Your sentence doesn’t revolve around the order of those three parts together, but much more around where the verb stands.

And where is that verb? In simple statement sentences in the German language, the verb will stand in position two. That means once you add in anything else BEFORE the sentence kicks off, you need to put the verb before the subject.

Let’s have an example to bring light into this system:
Standard sentence structure in English and German:

Let’s add something else in position 1, such as a time signal:

In German, many of the verbs take a range of prefixes. Some examples of these are auf-, ab-, um-, zu- or hin-. Every time a prefix is added to a verb, the meaning of the verb is altered.

For example, the word sehen means “to see” but the word aussehen means “to look”, referring to its appearance. They’re completely different words and show up separately in the dictionary.

The trick is to know that the prefix aus- separates from the stem sehen when you insert the verb in a sentence and it will sit at the end of the sentence.

Many learners know this in theory, but they often forget all about the prefix when they put this knowledge into practice. So this leads to sentences like Wow, diese Pizza sieht lecker! meaning “wow, this pizza sees deliciously!”. What the speaker meant to use was the word aussehen, but forgot the second half of the separable word and caused a misunderstanding. Said correctly, it should be, Wow, die Pizza sieht lecker aus. Guten Appetit!

10. Use Sie with strangers

Germans take their formality seriously. The English word “you” can be translated in several ways so it’s important to choose the correct one.

If you are worried about sounding too formal with Sie, don’t worry. Most Germans will happily guide you along in the conversation,and they may “offer the du” by saying wir können du sagen or du kannst du zu mir sagen? (we can use du, you can call me du?).

11. Choose the right past tense verb

In English, you almost always say “I have” in these tenses: I have eaten, I have jumped, I have studied. But in German, the verb sein (to be) is sometimes used and you’ll need to learn when to use each one. Luckily, there’s a pretty straightforward rule. In the German Perfekt, you use a form of sein for verbs of motion or transition.

gehen (to walk, to go)
laufen (to run)
springen (to jump)
fahren (to drive, to go)
sinken (to sink)
werden (to become)
sterben (to die – yep, death is a transition)