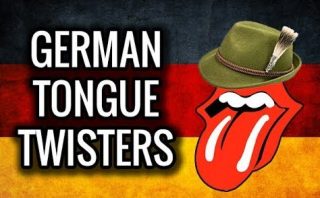 Tongue twisters, or Zungenbrecher, are a fantastic way to train your tongue in German pronunciation. It’s not only language learners who use tongue twisters—even speech therapists use them to help train native speakers, so you’re in good company!

Just as English-speakers enjoy a good “Peter Piper picked a peck of pickled peppers” challenge every now and then, Germans love their Zungenbrecher – literally, tongue-breakers.

The key to tongue twisters is the repetition in their sounds. This is the whole point of them: They repeat a bunch of really difficult sounds over and over, forcing your tongue to get to grips with them. After stumbling over the difficult phrases a few times, your tongue will eventually become used to the sounds. Once you can fluently say a tongue twister, you will be able to copy the sounds in your everyday spoken German.

Tongue twisters will also improve your memory and focus. The repetition will help to focus your brain on a single task. While this is good in your native language, it’s much more of a benefit in a foreign tongue. After a few tongue twisters, your brain will be in the German zone and tuned in for language practice.

Being able to ace a German tongue twister may seem like an impossible task, but if you take things slowly you’ll soon realize just how easy they are to pick up.

Here are 10 German tongue-twisters to improve your German! 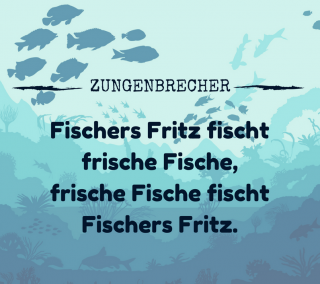 Okay, so there’s a lot going on in this one. Continually switching between the fi and fri sounds is hard enough, but there’s also the tricky sche which non-native speakers often struggle with. To tackle this one, take each word separately.

Once you can pronounce each individual word without any problems, begin to pair them up. Eventually—and don’t worry if this takes a lot of practice—you’ll be able to build up and say one sentence all at once. As your confidence rises, speed it up and impress your friends!

All those b sounds are the potential pitfalls here. There’s also a sneaky br in there. Germans usually roll their r when it follows a consonant, something which is uncommon in English and can be difficult for an English speaker to correctly pronounce. Once you’ve nailed it in this tongue twister, it’ll come naturally in your spoken German.

So much alliteration! And it’s this alliteration that’s so often used in English tongue twisters too. There aren’t any overly complicated sounds in this one—it just requires perseverance to get over all those d sounds. If you slow things down from the start you’ll be singing it before long.

The German z can be difficult for the native English speaker. We just don’t have a sound like it in our language. Once you know how to do it, it’s relatively easy to say—you just have to imagine that there’s an imaginary t in front of it, so you pronounce it as ts. This tongue twister becomes slightly easier to rattle off once you know this trick! 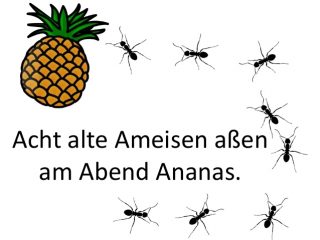 Again, this one shouldn’t be too difficult. The main point is being able to say all those a sounds in such a short span of time! One benefit of this twister is getting your brain used to pronouncing the German a as ah—unlike an American ay sound.

Even more b sounds! We’ve already seen these difficult b and br sounds in tongue twister #2 on this list. This one ups the ante along with its br pronunciation.

To master this one, take the words Bierbrauer, braut and braunes on their own and learn their pronunciations separately. Once you’ve conquered them individually, join the sentence back together and slowly take it on as a whole.

There are lots of vowel sounds jumping around in this mini poem-like twister. The umlaut on some of the a‘s changes their sound from ah to ay. Once you know this, the tongue twister becomes much simpler. But there are still some r sounds in there that need rolling—but if you’re this far down the list, you’ll have met them already!

Who thought just one word would count as a tongue twister?! Welcome to the world of German compound words! Germans love joining their words together which results in some ridiculously long trains of letters just like the one above.

To have this word effortlessly trip off your tongue, you need to attack it as if it were smaller words. Take each of its component parts on their own: Hottentotten, Potentaten, Tanten, Attentat. As previously mentioned, say these very slowly until you know the pronunciation inside out. Then join them up into the one long word. 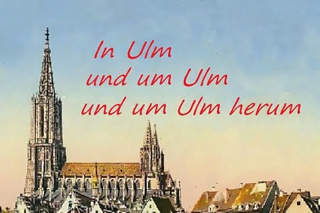 Translation: In Ulm, around Ulm, and all around Ulm.

None of the sounds in this sentence should be difficult for American tongues (apart from maybe that sneaky r in herum, but by now you’re able to handle this, right?). The trick is being able to slip in the l where needed. It’s not the most difficult tongue twister on this list, but it’s probably the most fun to say at full speed!

For this tongue twister you need to be able to differentiate between ch and ck. The former is more of a guttural sound, one which we don’t have in English. The latter sound is pronounced just as we would say it.

It can be tricky interchanging these as quickly as is needed in this phrase but, as with all tongue twisters, speed is the key! Start off slowly and build it up until you can say it like a native!