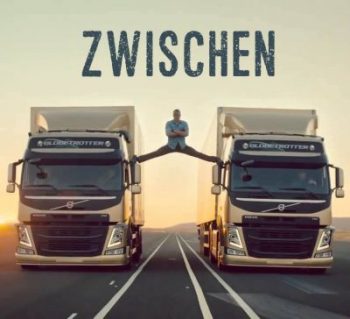 Prepositions are words that link a noun to the rest of the sentence. They usually tell you about time, place and direction. Examples of English prepositions include on, out, under, from, with, about and until, but there are many more. They are those little words that you don’t even notice you’re using, but which completely change the meaning of the sentence.

In German, using prepositions is more complicated because of German’s case system. The thing about German prepositions is that they affect the case of the noun that follows them.

Which in many ways is great, because it stops you from having to worry about what function the noun is playing in the clause (Is it a direct object? An indirect object? etc.). Instead, all you have to do is look at the preposition.

For example, if you want to say that you’re going somewhere with your parents, you automatically know that Eltern (parents) must be in the dative because it’s preceded by mit (with).

Let’s look at the different types of preposition you might encounter. 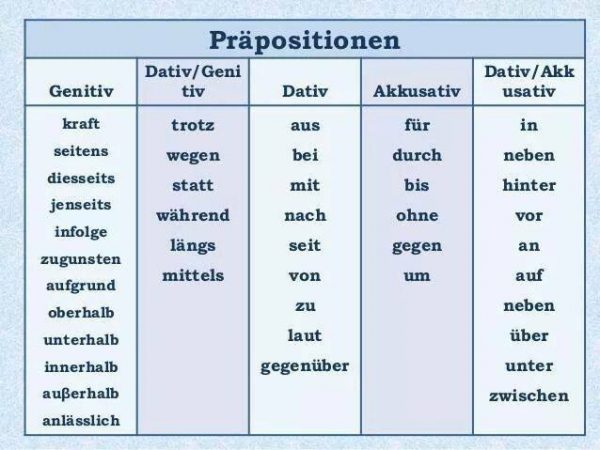 German Prepositions That Take the Accusative

There are many prepositions which are always followed by the accusative case. So it doesn’t matter where it comes in a sentence, the noun directly following these prepositions are automatically in the accusative. A list of these would look a lot like this:

German Prepositions That Take the Dative

Alongside prepositions that take the accusative, there are also those which only take the dative. These work exactly the same way as accusative prepositions, but (obviously) they are followed by the dative case. These include:

German Prepositions That Take the Genitive

Now here’s where things get interesting! Wechselpräpositionen (two-case prepositions) are prepositions that can take either the dative or the accusative. Except, you can’t use them interchangeably. There’s a rule:

If you’re trying to express movement (direction), use the accusative.

If you’re trying to state where something is (position), use the dative.

Take the sentence “Ich hänge das Bild an die Wand” (I hang the picture on the wall). Here, the an implies movement: The picture wasn’t on the wall before, but it is now. It has moved. This expresses direction, and therefore takes the accusative: an die Wand.

On the other hand, the sentence “Das Bild hängt an der Wand” (the picture is hanging on the wall) expresses position: It tells the reader where the picture is, and implies no movement. In this case, the an takes the dative: an der Wand.