The English Garden (Englischer Garten) stretches all the way from Munich’s city center to the northeastern city limits. It was created in 1789 by the British physicist Sir Benjamin Thompson. Sir Benjamin was primarily a physicist but also worked as a government administrator. He spent 11 years in Munich organizing the Bavarian army. This garden (with an area of 3.7 km2) is considered to be one of the world’s largest urban public parks, larger than New York’s Central Park but smaller than London’s Richmond Park.

Highlights of the English Garden, which is even bigger than Central Park in New York, include: 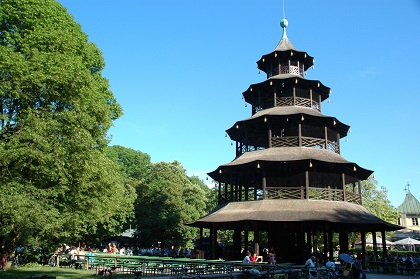 Chinese Tower and its huge beer garden, which seats 7000 people
The Chinesischer Turm (“Chinese Tower”) is a 25 meter high wooden structure, first constructed in 1789 to 1790, from a design by the Mannheimer military architect Joseph Frey. It was modeled on the “Great Pagoda” in the Royal Botanic Gardens in London. Often a brass band will play live from the first floor of the tower.

A children’s carousel was put up near the tower in 1823, similar in design to the current one. By 1912 a replacement was needed, which is still in use. Alongside the usual horses, the carousel has less expected creatures to ride, such as ibex, stork and flamingo.

Japanese Teahouse, where you can take part in a traditional tea ceremony on the weekend.
It was created on a small island at the south end of the Englischer Garten to celebrate the Summer Olympics of that year in1972. Its designers were Soshitsu Sen and Mitsuo Nomura. 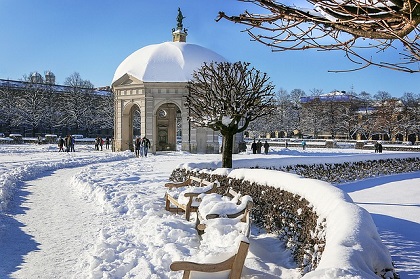 Monopteros, a Greek style temple, which offers great views of Munich’s cityscape. This small (16 m high), round, Greek style temple was designed by Leo von Klenze. Hill and temple were completed in 1836. Ten Ionic columns support a shallow copper covered dome. A particular feature of the Monopteros is the use of polychrome stone painting, an interest of Klenze at the time, who intended the building to serve as a model for its use.

Kleinhesseloher See, where you can rent a paddle boat, and its idyllic beer garden
It was created under Werneck’s direction around 1800. Kleinhesselohe had been the original northern limit of the park, with a watch house and a gate to the northern Hirschau. Three islands can be found within the lake’s 86,410 square meters: Königsinsel (“King’s Island”) Kurfürsteninsel (“Elector’s Island”) and Regenteninsel (“Regent’s Island”). 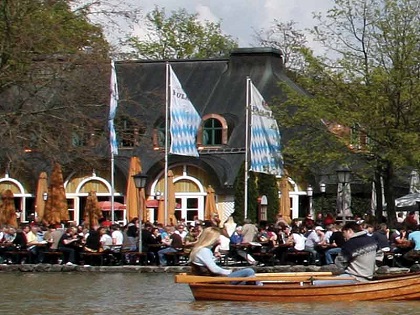 Seehaus
In 1882 to 1883 Gabriel von Seidel built a boathouse with food service. This was replaced with a new building by Rudolf Esterer in 1935; with a terrace overlooking the lake, this was very popular until 1970, when it was demolished. For fifteen years service was from temporary buildings, until in 1985 the current Seehaus was built to a design by Ernst Hürlimann and Ludwig Wiedemann. Today, the lake and the Seehaus are well-loved leisure destinations; pedal boats are also leased here to those who want to splash around.

Schönfeldwiese, the lawn situated between the Monopteros and the Japanisches Teehaus where nude sunbathing is allowed since the 1960’s. It caused quite a sensation at the time and also made the English Gardens well-known, even outside Munich. 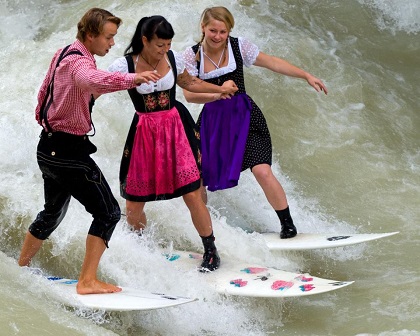 At the mouth of the artificial stream that runs through the Englischer Garten, there is a standing wave that is produced by the water pumping mechanism. Surfers attempt to surf on this wave for as long as they can, in spite of the signs stating the unenforced law that surfing is forbidden.

Open air theatre
The northern part of the garden also contains a small amphitheatre, built in 1985 and called the new amphitheatre. It is used for open air performances in summer. A carnival party “Kocherlball” (the Cooks’ Ball) in the English Garden takes place annually third Sunday in July.