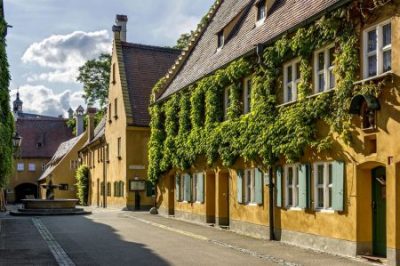 The Fuggerei is the world’s oldest social housing complex still in use. It is a walled enclave within the city of Augsburg, Bavaria. It takes its name from the Fugger family and was founded in 1516 by Jakob Fugger the Younger (known as “Jakob Fugger the Rich”) as a place where the needy citizens of Augsburg could be housed.

By 1523, 52 houses had been built, and in the coming years the area expanded with various streets, small squares and a church. The gates were locked at night, so the Fuggerei was, in its own right, very similar to a small independent medieval town. It is still inhabited today, affording it the status of being the oldest social housing project in the world. 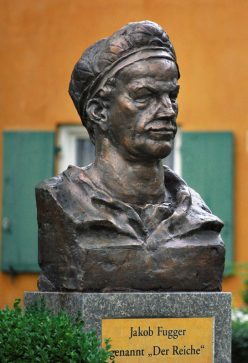 Some of the same rules have been applied for almost 500 years. Only needy Catholic Augsburgers are accepted as residents. Ancestry, age and family status are not deciding factors. Alongside the prayer requirements, the residents are asked to perform small services for the common welfare, such as serving as night watchman, sexton or gardener. The gates of the Fuggerei are open until 10 pm, afterwards residents must pay the night watchman a sum of 50 cents to be admitted, or one euro if it is after midnight.

The requirements for the Fuggerei as a residential and living environment were always changing, and the structure was correspondingly adapted. In the mid-17th century, for instance, a school was established for a time in order to educate children in Catholic dogma. There were buildings for other foundations and charitable projects, and there was even a priest. In more recent times as well, the infrastructure of the Fuggerei was adapted to the conditions at hand – for instance, with the construction of its own bunker during the Second World War, which today serves as a bunker museum by housing exhibits. After the war, two widow’s buildings for wives who had been left behind were built, one between Neue Gasse and Gartengasse and the other on Markusplätzle. To accommodate increasing tourism, a shop and a beer garden were built. 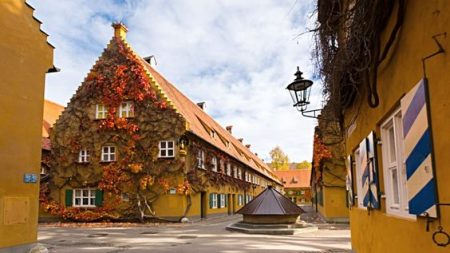 The rent was and is still one Rheinischer Gulden per year (equivalent to 0.88 euros), as well as three daily prayers for the current owners of the Fuggerei — the Lord’s Prayer, Hail Mary, and the Nicene Creed. The conditions to live there remain the same as they were 480 years ago: one must have lived at least two years in Augsburg, be of the Catholic faith and have become indigent without debt. The five gates are still locked every day at 10 PM.

Housing units in the area consist of 45 to 65 square meters (500–700 square feet) apartments, but because each unit has its own street entrance, it simulates living in a house. There is no shared accommodation; each family has its own apartment, which includes a kitchen, a parlor, a bedroom and a tiny spare room, altogether totaling about 60 square meters. Ground-floor apartments all have a small garden and garden shed, while upper-floor apartments have an attic. All apartments have modern conveniences such as television and running water. One ground-floor apartment is uninhabited, serving as a museum open to the public. The doorbells have elaborate shapes, each being unique, dating back to before the installation of streetlights when residents could identify their door by feeling the handle in the dark.

The Fuggerei is supported by a charitable trust established in 1520 which Jakob Fugger funded with an initial deposit of 10,000 guilders. According to the Wall Street Journal, the trust has been carefully managed with most of its income coming from forestry holdings, which the Fugger family favored since the 17th century after losing money on higher yielding investments. The annual return on the trust has ranged from an after-inflation rate of 0.5% to 2%. The Fugger family foundation is presently headed by countess Maria-Elisabeth von Thun und Hohenstein, née countess Fugger von Kirchberg, who lives at Kirchberg Castle. Currently the trust is administered by Wolf-Dietrich Graf von Hundt.

As of 2011, the fee for a tour into the Fuggerei is 4 euro, over four times the annual rent.