Mainz is a German city on the Rhine River. It’s known for its beautiful old town, with half-timbered houses and medieval market squares. In the center, the Marktbrunnen is a Renaissance fountain with red columns. Nearby, a distinctive octagonal tower tops the Romanesque Mainz Cathedral, built of deep red sandstone. The Gutenberg Museum honors the inventor of the printing press with exhibits, including 2 of his original Bibles.

Some of the top sights to see in Mainz are: 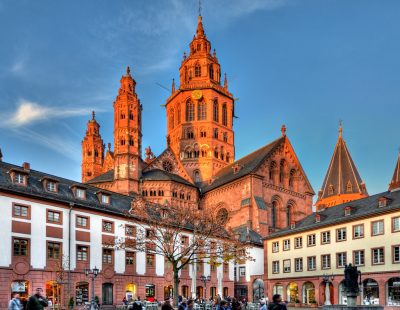 Mainz Cathedral or St. Martin’s Cathedral is located near the historical center and pedestrianized market square of the city of Mainz, Germany. This 1000-year-old Roman Catholic cathedral is the site of the episcopal see of the Bishop of Mainz.

Mainz Cathedral is predominantly Romanesque in style, but later exterior additions over many centuries have resulted in the appearance of various architectural influences seen today. It comprises three naves and stands under the patronage of Saint Martin of Tours. The eastern quire is dedicated to Saint Stephen.

The interior of the cathedral houses tombs and funerary monuments of former powerful Electoral-prince-archbishops, or Kurfürst-Erzbischöfe, of the diocese and contains religious works of art spanning a millennium. The cathedral also has a central courtyard and statues of Saint Boniface and The Madonna on its grounds. 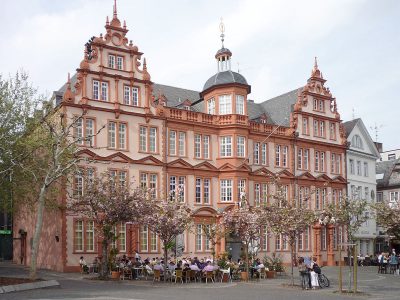 The Gutenberg Museum is one of the oldest museums of printing in the world, located opposite the cathedral in the old part of Mainz, Germany. It is named after Johannes Gutenberg, the inventor of printing from movable metal type in Western Europe.

A group of people founded the museum in 1900, 500 years after Johannes Gutenberg’s birth, to honor the inventor and present his technical and artistic achievements to the public at large. They also aimed to exhibit the writing and printing of as many different cultures as possible.

Publishers, manufacturers of printing machines and printing houses donated books, apparatus and machines, which formed the basis of the collection. In its first few years the museum was part of the city library, meaning that the most beautiful and characteristic volumes from the library’s extensive collection could be requisitioned for the museum. Visitors were thus presented with a survey of almost 500 years of the printed book. In time the museum expanded to include sections on printing techniques, book art, job printing and ex-libris, graphics and posters, paper, the history of writing of all cultures of the world and modern artists’ books. 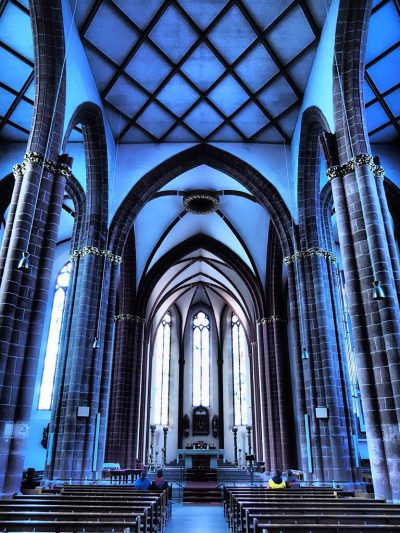 The Collegiate Church of St. Stephan, known in German as St. Stephan zu Mainz, is a Gothic hall collegiate church located in the German city of Mainz.

St. Stephan zu Mainz was originally built in 990 at the order of Archbishop Willigis, who also initiated the building of Mainz Cathedral. The church was founded on top of the highest hill in the town, most likely on behalf of Theophanu, the widow of Otto II, Holy Roman Emperor. Willigis intended the church to be a site of prayer for the Empire.

The provost of the Collegiate Church administered one of the archdiaconates (a medieval organizational form similar to today’s diaconates) of the Archbishopric of Mainz.

The current church building dates from the late medieval era; construction of the main area of the church began in about 1267 and was completed in 1340. The successional building kept the guidelines of the floor plan of the original Willigis building and with it the design as a double choir church. St. Stephan is the oldest Gothic hall church in the Upper Rhine district, and is (besides Mainz Cathedral) the most important church in the city of Mainz. 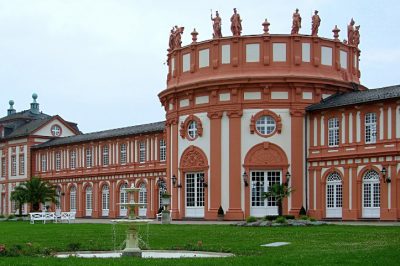 Biebrich Palace (German: Schloss Biebrich) is a Baroque residence (Schloss) in the borough of Biebrich in the city of Wiesbaden, Hesse, Germany. Built in 1702 by Prince Georg August Samuel of Nassau-Idstein, it served as the ducal residence for the independent Duchy of Nassau from 1816 until 1866.

Count Georg August Samuel of Nassau-Idstein, appointed Prince in 1688, wanted a more impressive seat of authority than his palace in Idstein in the Taunus. He moved first to Wiesbaden, and later to Biebrich (at that time a separate community from Wiesbaden). In the immediate vicinity of the Rhine, opposite the Biebricher Wörth, he began construction of a chateau. The structure was designed by the Baroque architect Julius Ludwig Rothweil and was completed in 1702. It survives today as the West Pavilion of the palace. Only four years later, a duplicate structure was built only 86 meters to the east. While the West Pavilion was reserved for the prince and his entourage, the East Pavilion served his wife. 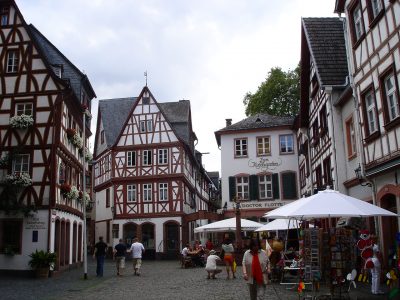 One of the prettiest scenes in Mainz is this small rectangular square enclosed by tall half-timbered houses. The square itself dates back to before 1329, while its houses are from the 16th to the 18th centuries. One, Zum Aschaffenberg is the oldest preserved half-timbered house in Mainz, built around 1500. In front of another fine old house, Zum Beimburg you can find the remains of a stump: this isn’t actually a cherry tree as it is often claimed to be (Kirschgarten means cherry orchard), but an almost petrified oak.

At the center, bordered by a restaurant terrace, is the Kirchgartenbrunnen, a fountain that has only been here since 1932 and is made with red sandstone repurposed from broken ornamental structures on the Theodor Heuss Bridge. 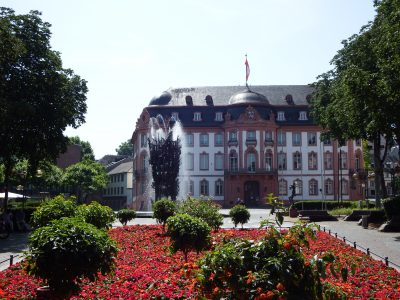 A grand tree-lined square, Schillerplatz was already a public plaza in Mainz’s Roman era and was used as a marketplace in the Middle Ages. The square is fringed by regal palaces in the Baroque and Rococo styles housing state government offices.

There’s a bronze statue of the poet and playwright Friedrich Schiller, put up on his 100th birthday in 1859. But the square’s most striking monument is the nine-metre-high Mainzer Fastnachtsbrunnen, which commemorates the famous carnival celebrations that take over the square on Shrove Monday.

This fountain is a postcard favorite and is decorated with more than 200 bronze figures from Mainz history and local folklore. 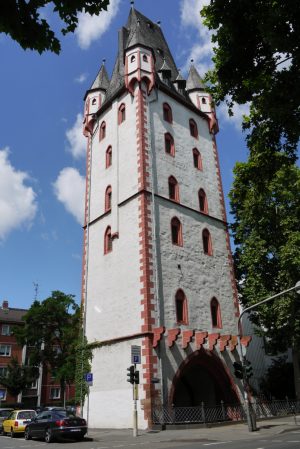 The Wood Tower is a medieval tower in Mainz, Germany, with the Iron Tower and the Alexander Tower one of three remaining towers from the city walls. Its current Gothic appearance dates to the early 15th century.

It is so named because wood used to be piled next to it on the bank of the Rhine.[

Like the Iron Tower, the Wood Tower was used as a watchtower and gate-tower and later as a gaol. It was badly damaged in World War II and accurately reconstructed in 1961 for the two-thousandth anniversary of the city. It currently houses various organizations and clubs. 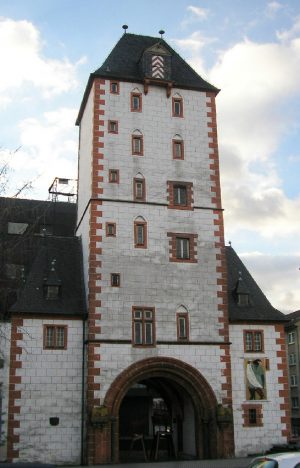 The Iron Tower (German: Eisenturm) is a medieval tower dating to the early 13th century, and modified in the 15th century, which with the Wood Tower and the Alexander Tower is one of three remaining towers from the city walls of Mainz, Germany. Its name derives from the Iron Market (Eisenmarkt), which was held in the immediate vicinity until the 19th century.

The Iron Tower served as a watchtower and gate to the city, and later as a gaol. It was badly damaged in World War II and reconstructed in the 1960s. Today it houses various organizations and arts projects and is used for art exhibitions. 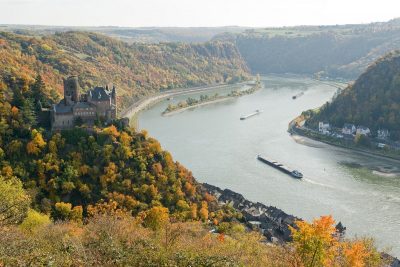 The Rheinsteig is a hiking trail following a mainly elevated path along the east bank of the Rhine River in Germany. Its 320 kilometres (200 mi) route stretches from Bonn to Wiesbaden, running parallel to the Rheinhöhenweg Trail and Rheinburgenweg Trail.

The Rheinsteig passes through woodlands and vineyards, and has challenging ascents and descents. It is signposted by signs with an ‘R’ on a blue background. The Rheinsteig allows either longer-distance hiking or a number of short tours. 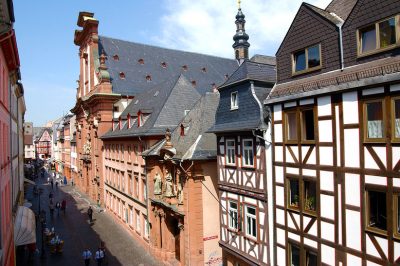 The church of St. Augustin known in German as Augustinerkirche, was the minster of the Augustine friars in the city centre of Mainz. Today it is the seminary church of the Catholic theological seminary of the Roman Catholic Diocese of Mainz.

The church was built from 1768 to 1771 on the site of a Gothic church building on the Augustinian Street, dating to 1260. The builders were Augustinian hermits, who had already built the predecessor building and whose fraternity endured from 1260 to the Imperial Reichsdeputationshauptschluss of 1803. The name of the master mason is unknown.

After the secularization of the monastery in 1803, the building ensemble became a seminary comprising a church of the diocese of the newly created bishopric in 1805. The church was not destroyed in World War II. 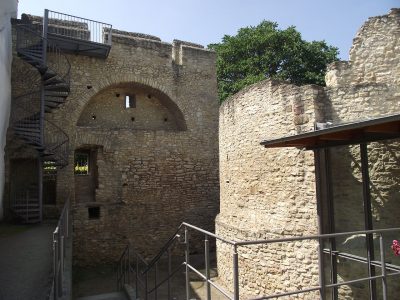 The Imperial Palace Ingelheim (Ingelheimer Kaiserpfalz) is an important Imperial Palace erected in the second half of the 8th century in Germany. It served Emperors and Kings as a residence and place for governance until the 11th century. The palatinate complex is located in the cadastral area of Nieder-Ingelheim, 15 km west of Mainz, in der cadastral section „Im Saal“ at a slope with look-out to the Rhine plains. From the buildings of the Imperial Palace impressive relics above ground are preserved today. The greater part of the complex remains as foundation under ground level and allows it to be the basis for archaeological excavations to reconstruct the entire system of buildings.