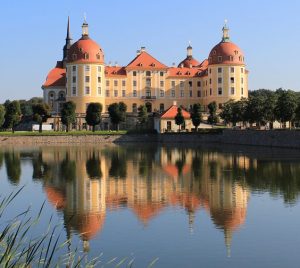 Moritzburg Castle is one of the most impressive baroque palaces in central Europe. Reached via a tree-lined avenue, it is situated on an island in the middle of a lake. After visiting the palace, you can enjoy a romantic stroll to the enchanting Fasanenschlösschen (little pheasant castle) built in the rococo style.

Moritzburg Castle (Schloss Moritzburg) is a Baroque palace in Moritzburg, in the German state of Saxony, about 13 kilometres (8.1 mi) northwest of the Saxon capital, Dresden. The castle has four round towers and lies on a symmetrical artificial island. It is named after Duke Moritz of Saxony, who had a hunting lodge built there between 1542 and 1546. The surrounding woodlands and lakes have been a favorite hunting area of the electors and kings of Saxony.

In 1972 Moritzburg Castle was one of the locations of the Czechoslovak-German film Tři oříšky pro Popelku (“Three Nuts for Cinderella”), which became a popular fairy-tale movie in Central Europe.

The original castle, built from 1542–1546, was a hunting lodge for Moritz of Saxony, then Duke of Saxony. Elector John George II of Saxony had the lodge extended; the chapel was added between 1661 and 1671. Designed by his architect, Wolf Caspar von Klengel, the chapel is an example of early Baroque architecture. Leather wallpaper and the worldwide unique feather room with wall hangings made from natural and artificial feathers are testament to the extravagant taste of that era. The Little Pheasant Castle in the park and monumental Venus fountain were built at that time and are both visually connected to Moritzburg Castle by a 2.5-km long avenue. 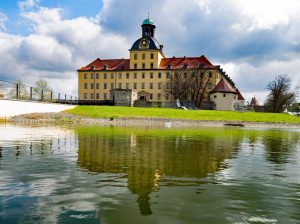 The chapel was consecrated in a Catholic rite in 1697, after the grandson of John George II, Elector Augustus II the Strong, converted to Catholicism in order to secure his election as King of Poland. Between 1723 and 1733, Augustus had the castle remodelled as a country seat by architects Matthäus Daniel Pöppelmann and Zacharias Longuelune, adding a formal park, several ponds and a game preserve.

The surroundings of the castle were further developed by Elector Frederick Augustus III of Saxony, a greatgrandson of Augustus II the Strong, at the end of the 18th century. The Little Pheasant Castle (Fasanenschlösschen) was built between 1770 and 1776. The grounds were extended to include a building for the storage of bird nets, the large Well of Venus, living quarters for Count Camillo Marcolini and a maritime setting on the Great Lake complete with a miniature harbor with jetty and lighthouse.

Prince Ernst Heinrich of Saxony, who lived in the castle between 1933 and 1945, was the last resident of the House of Wettin. He was dispossessed in 1945 by the postwar Soviet administration.

The interior of the castle is furnished with examples of opulent baroque decor from the time of Augustus the Strong. The walls are covered in 17th century gold-gilded leather. Many rooms’ furnishings are dedicated to courtly hunting. 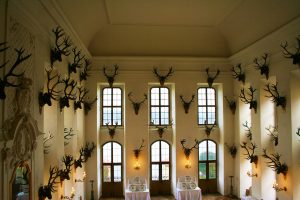 The collection of red deer antlers is one of the most important of its kind. The castle’s largest collection of antlers is shown in the Speisesaal (“dining room”). Most of its 71 trophies are between 270 and 400 years old; they were purchased or acquired as presents. Among them is the heaviest red deer antler in the world, weighing 19.8 kilograms (44 lb) and spanning almost 2 metres (6.6 ft). In the Monströsensaal (“monstrosity room”), there are 39 contorted antlers. One specimen, a 66-point red deer antler is from an animal killed by Elector Frederick III of Brandenburg in 1696.

Examples of Chinese, Japanese and Meissen porcelain are shown in the historical Porzellanquartier (“porcelain quarter”). This exhibition displays porcelain depicting hunting, exotic and mythological motifs as well as animal figurines that are relating to Moritzburg’s original determination as a hunting lodge.

The apartments contain examples of opulence in the lacquered and ornate furniture, such as the Augsburg-made silver furniture styled after Louis XIV’s silver furniture at Versailles. There are also engraved and inlaid weapons for hunting. The Billiardsaal (“billiards hall”), named after a former billiard table in it, contains monumental paintings on leather by Louis de Silvestre. Eleven rooms are decorated with painted leather wallpaper from the 17th century.

A collection of royal carriages is shown in the entrance hall.

During the reconstruction phase of the palace from 1723 until 1733, the large pond surrounding the castle’s artificial island was built from what was originally four smaller ponds. The other ponds in the Friedewald date from the 16th century and have been used for carp production since then. The channels connecting the ponds allow one to “fish” the carp by draining the water. 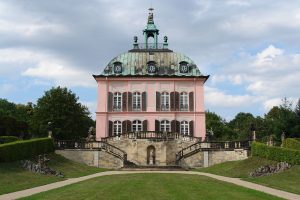 Shortly after the remodelling of Moritzburg Castle as the country seat of August the Strong, a single-story pavilion was built just 2.5 km away by the architect Johann Christoph Knöffel. The pavilion’s foundation was later used for the Chinese-style Little Pheasant Castle (Fasanenschlösschen) in 1770. Elector Frederick Augustus III of Saxony had the pavilion built in the middle of the gardens. Johann Daniel Schade who had been the architect in charge of the royal building projects, received the commission for the Rococo design. Construction was completed about 1776.

The shell-pink pavilion is located at the end of an alley leading to the main castle. The square building has five bays wide on each side. The high roof has an ogee profile, capped by an open cupola with a pair of Chinese figures under a parasol as a finial. Concealed behind plantings to give the pavilion an isolated ambience, were outbuildings used to breed pheasants for use in hunting.

The few rooms, including the elector’s study, are furnished with original trappings. The Rococo finishes include murals on canvas, inlaid wood paneling, painted and gilded stucco ceilings, and unique finishes crafted from materials like embroidered silk, straw, pearls and feathers. The interiors were restored between 2009 and 2013 through a collaboration between Ostdeutsche Sparkassenstiftung, Sparkasse Meißen, and World Monuments Fund.