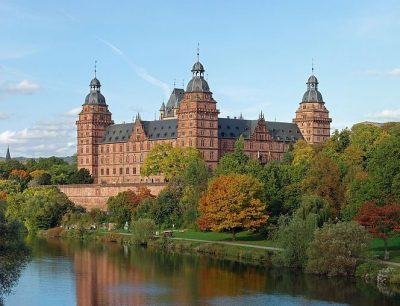 Schloss Johannisburg is a schloss in the town of Aschaffenburg, in Franconia in the state of Bavaria, Germany. It was erected between 1605 and 1614 by the architect Georg Ridinger (de) for Johann Schweikhard von Kronberg, Prince Bishop of Mainz. Until 1803, it was the second residence of the Prince Bishop of Mainz. It is constructed of red sandstone, the typical building material of the Spessart, the hills near Aschaffenburg.

Schloss Johannisburg is located in the city of Aschaffenburg, in the district of Lower Franconia of the state of Bavaria, Germany. It is situated in the center of the city, overlooking the river Main. 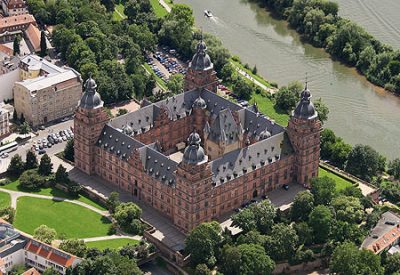 The palace was erected between 1605 and 1614 by the architect Georg Ridinger (de) for Johann Schweikhard von Kronberg, Archbishop of Mainz. The considerable expense came from the taxes of his fief: Eichsfeld, Erfurt and the Mainzer Oberstift (the part of the Electorate administered from Aschaffenburg) made the largest financial contributions. A keep from the destroyed 14th-century castle that had formerly stood on the site was included in the construction and is the oldest part of the castle. The prior castle had been burned down along with most of the town on 10 August 1552 by the troops of Albert Alcibiades, Margrave of Brandenburg-Kulmbach.

Until the end of the ecclesial princedoms in Germany in 1803, Schloss Johannisburgwas the second residence of the Prince Bishop of Mainz. At the end of the 18th century, the interior had been restructured in the style of Classicism (or Neoclassicism) by Emanuel Herigoyen. 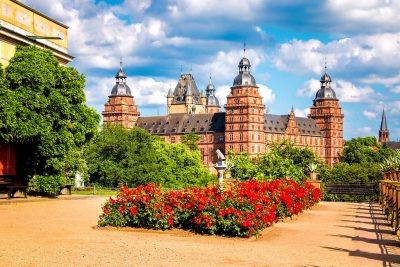 During the reign of Ludwig I, Schloss Johannisburg served as the summer residence of the King, who referred to Aschaffenburg as his “Bavarian Nice”. He commissioned the construction of a Roman villa known as Pompejanum within sight of the palace.

The palace was nearly destroyed in the closing days of World War II. Rebuilding started in 1951 and took more than twenty years. 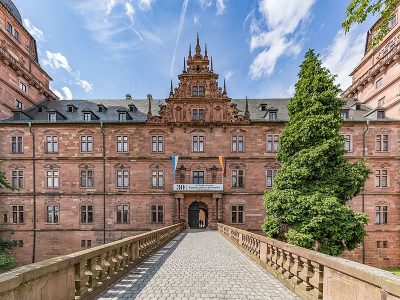 As of 1716, Schloss Johannisberg belonged to the prince abbot of Fulda, who had a grand, three-winged palace built in line with the taste of the times. It is thanks to this owner that the benefits of a “Spätlese” (late harvest) were recognized. In 1775, the courier annually sent to Fulda to receive official permission for the start of the grape harvest was delayed by several weeks. By the time he returned to Johannisberg, the grapes were infested with noble rot. Nevertheless, the courageous cellarmaster had the rotten grapes harvested and vinified, thereby producing a new style of ?wine – “Spätlese” – which thereafter became standard at Johannisberg. Although documents from 1730 report that a few growers “gladly waited for a bit of noble rot in order to increase the sugar level of the grapes,” the year 1775 marked the beginning of a deliberately scheduled late harvest of botrytized grapes. A monument adjacent to the Vinothek (wine shop), where the estate’s current vintages can be sampled, commemorates the famous courier whose delay led to the worldwide triumphal course of “Spätlese”.