New York has Broadway. Paris, the Champs- Elysées. And Reutlingen? The provincial town in south-western Germany has Spreuerhofstrasse. Spreuerhofstrasse in the south-western town of Reutlingen is just 3.80 meters long and listed as the narrowest alley in the world in the Guinness Book of World Records, with a width of just 31 centimetres (12.2 inches). 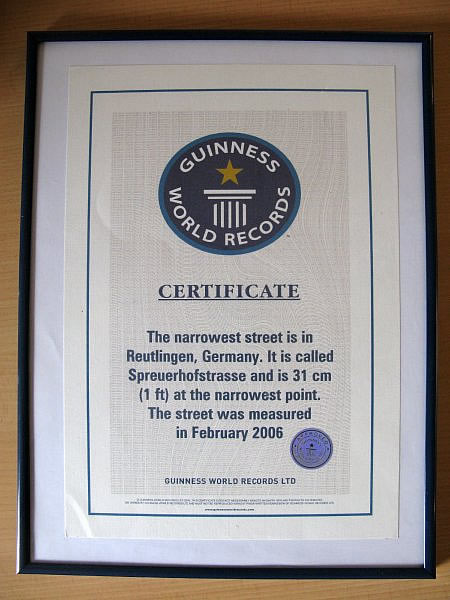 There’s not much to see in Spreuerhofstrasse. After all, the street is just 3.80 meters (12.5 feet) long. And it isn’t particularly pretty. One has to squeeze past blank walls, and when it’s raining, water drips from the gutter of an old half-timbered house on one side. But tourists from Asia and America flock to inspect the alley, adorned at each end with the sign “Narrowest street in the world” in German and English. 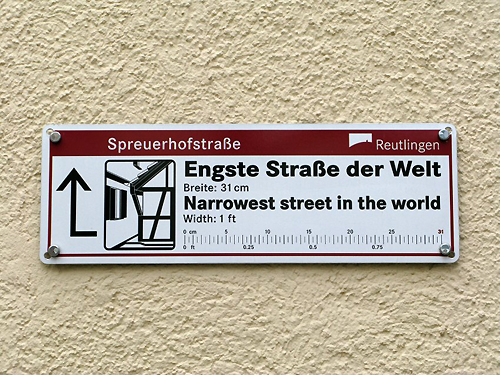 The city owes its record to a devastating fire and a city official who was either unfamiliar with his town or extremely slim. The blaze tore through the city in 1726, prompting the authorities to rule that buildings should have gaps between them to stop fires from spreading too quickly. Then, in 1820, a town hall administrator decided to elevate the status of this particular gap to that of a full-fledged public street. 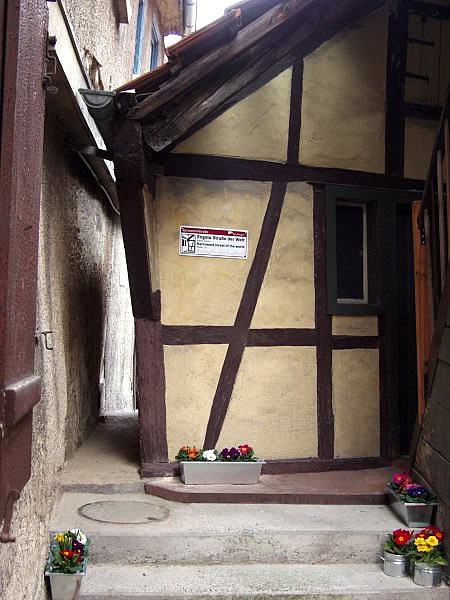 Reutlingen now faces a dilemma that could cost it its global status. The wall of the near-derelict half-timbered house is starting to bulge outwards because water has seeped into the ancient beams.

Technically, that is making the street even narrower, so one might think that Reutlingen’s world record is becoming even more secure. But if it goes on, the street will become so narrow that humans will no longer be able to use it. And Reutlingen would lose its record. 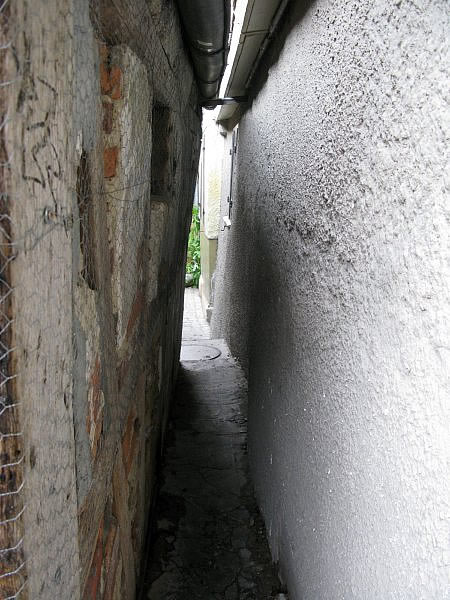 If the house is torn down, on the other hand, the street will become too wide. The answer is to shore up the building, but so far no one, including the owner, is ready to foot the bill. Building inspectors are to assess the cost of refurbishing the house.
Time is running out. “If nothing happens, the alley will have to be closed — in 2013 at the latest because it won’t stand more than one more winter,” warns local tour guide Eugen Wendler, 73.

Everyone knows that something’s got to happen. After all, what would the world think of a city that can’t hold on to even such a small record?