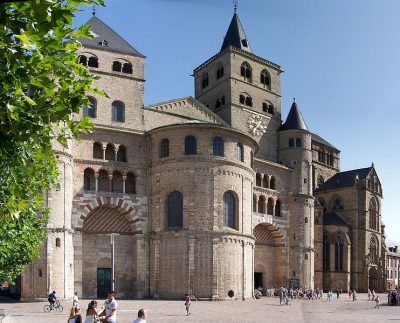 Cathedral of St. Peter and the Church of our Lady in Trier

The edifice is notable for its extremely long life span under multiple different eras each contributing some elements to its design, including the center of the main chapel being made of Roman brick laid under the direction of Saint Helen, resulting in a cathedral added onto gradually rather than rebuilt in different eras.

Its dimensions, 112.5 m length by 41 m width, make it the largest church structure in Trier. In 1986 it was listed as part of the Roman Monuments, Cathedral of St. Peter and Church of Our Lady in Trier UNESCO World Heritage Site.

The structure is raised upon the foundations of Roman buildings of Augusta Treverorum. Following the conversion of the Emperor Constantine the Bishop Maximin of Trier (329-346) coordinated the construction of the grandest ensemble of ecclesiastical structures in the West outside Rome: on a groundplan four times the area of the present cathedral no less than four basilicas, a baptistery and outbuildings were constructed; the four piers of the crossing formed the nucleus of the present structure. 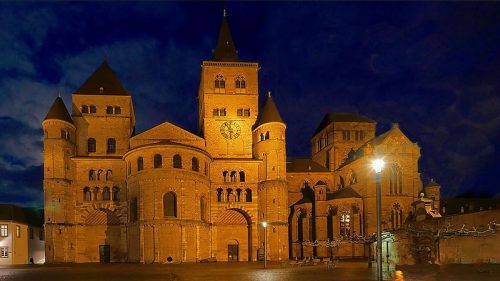 View of the Cathedral at night. Photo by Helge Klaus Rieder

The fourth-century structure was left in ruins by the Franks and rebuilt. Normans destroyed the structure again in 882. Under Archbishop Egbert (d. 993) it was restored once more.

Today’s Cathedral still contains a Roman central section with the original walls rising up to a height of 26 m (86 ft). The huge fragment of a granite column next to the entrance to the Cathedral is another indication of the Roman origin of the building. After the destructions in the 5th and 9th centuries, the remaining nucleus was enlarged by Romanesque additions – today, the Cathedral, with its three crypts, its cloister, Cathedral Treasury, and Holy Robe Chapel, displays architecture and artwork from more than 1650 years. 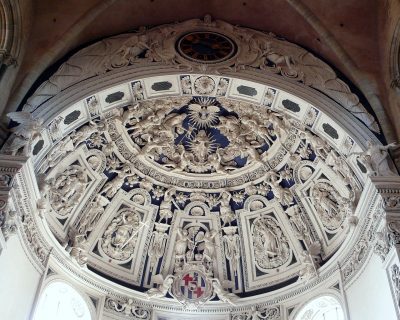 Baroque stucco-work in the vault of the west-end choir

The West front in five symmetrical sections remains typical of Romanesque architecture under the Salian emperors. The West end choir, with its apsidal semi-cylinder expressed on the exterior façade, was completed in 1196. The interior is of three Romanesque naves with Gothic vaulting, and a Baroque chapel for the relic of the Seamless robe of Jesus, recovered from the interior of the high altar in 1512, complete the interior.

The Latin inscription above the clock on the tower reads “NESCITIS QVA HORA DOMINVS VENIET” (“You do not know what time the Lord is coming”).

The Seamless Robe of Jesus, the robe said to have been worn by Jesus during or shortly before his crucifixion, is the most well-known relic in the cathedral treasure. It is kept in an annex and shown to the public only infrequently, most recently in 2012. Beyond that, the Cathedral also has one of the Holy Nails from the Cross.

The skull of St. Helena, the mother of Emperor Constantine, is displayed in the cathedral. Decorated portable altar and sandal of St. Andrew is also an important relic of the cathedral.