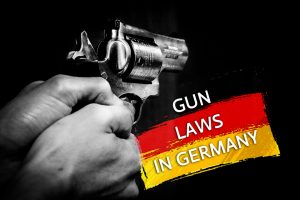 The German system of gun control is among the most stringent in Europe. It restricts the acquisition, possession, and carrying of firearms to those with a creditable need for a weapon. It bans fully automatic weapons and severely restricts the acquisition of other types of weapons. Compulsory liability insurance is required for anyone who is licensed to carry firearms.

In recent years, German gun-control law underwent several reforms that made it even more stringent. A new Weapons Act became effective in 2003 after a school shooting in the city of Erfurt in which a student killed sixteen persons. The new Act restricted the use of large caliber weapons by young people and strengthened requirements for the safe storage of firearms.

Another reform was enacted in 2009 in response to the massacre at Winnenden, in which an eighteen-year-old killed fifteen people in the course of a school shooting. This latest reform led to the creation of a federal gun register and to intense governmental monitoring of gun owners’ compliance with requirements for the safe storage of firearms. Pursuant to the reformed legislation, the authorities may at any time request access to the premises of any registered gun owner to monitor whether proper safe-storage procedures are being observed. 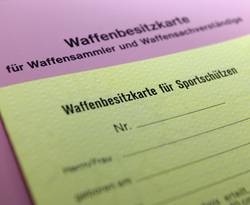 To get a gun, Germans must first obtain a firearms ownership license (Waffenbesitzkarte) – and you may need a different one for each weapon you buy – or a license to carry (Waffenschein).

Applicants for a license must be at least 18 years old and undergo what’s called a reliability check, which includes checking for criminal records, whether the person is an alcohol or drug addict, whether they have mental illness or any other attributes that might make them questionable to authorities.

The also have to pass a “specialized knowledge test” on guns and people younger than 25 applying for their first license must go through a psychiatric evaluation.

One must also prove a specific and approved need for the weapon, which is mainly limited to use by hunters, competitive marksmen, collectors and security workers – not for self-defence.

Once you have a license, you’re also limited in the number of and kinds of guns you may own, depending on what kind of license you have: Fully automatic weapons are banned for all, while semiautomatic firearms are banned for anything other than hunting or competitive shooting.

Under the reforms passed in the wake of a 2009 mass shooting, gun owners are also subject to continued monitoring by the government with officials able to ask gun owners at any time to enter their private property and check that they are properly storing their weapons.

But even given Germany’s strict gun policies, the country was still home to the fourth-highest number of legal guns per capita in 2013, falling behind just the United States, Switzerland and Finland.

About 2 million people own more than 5.5 million legal guns in Germany for a population of more than 80 million.

On top of that, police unions have estimated that there are up to 20 million more illegally-owned guns in Germany – this would mean roughly 30 guns for every group of 100 people.

But even given the relatively high amount of guns in the country, Germany has one of the lowest rates of gun-related deaths each year, according to international GunPolicy.org research by the University of Sydney.

Over the past 20 years, “crimes against life” – which include murder as well as negligent manslaughter – that involve guns have dropped from 783 in 1995 to 130 in 2015, according to the Federal Criminal Police Office (BKA). Of those crimes in 2015, just 57 were intentional murders.

Several mass shootings within the past two decades have had a great impact on gun control policy. Since those mass shootings, there has also been drop-off in gun violence. In 2009 when Winnenden happened, there were 179 crimes against life that involved guns being fired, compared to the 130 such crimes in 2015.

There are two kinds of firearms carry permits in Germany:

1. Firearms carry permits (Waffenschein) entitle licensees to publicly carry legally owned weapons, whether concealed or not. A mandatory legal and safety class and shooting proficiency tests are required to obtain such a permit. Carry permits are usually only issued to persons with a particular need for carrying a firearm. This includes some private security personnel and persons living under a raised threat level like celebrities and politicians. They are valid up to three years and can be extended. Carrying at public events is prohibited. Licensed hunters do not need a permit to carry loaded weapons while hunting, and unloaded weapons while directly traveling to and from such an activity.

2. A small firearms carry permit (Kleiner Waffenschein) was introduced in 2002. It can be obtained without having to demonstrate expert knowledge, necessity or a mandatory insurance. The only requirements are that the applicant be of legal age, trustworthy and personally adequate. It entitles the licensee to publicly carry gas pistols (both of the blank and irritant kind) and flare guns. These types of firearms are freely available to adults; only the actual carrying on public property requires the permit. Similar to the full permit, carrying at public events is prohibited.

Firearms that are prohibited in Germany may not be owned by anyone except with a special license from the Federal Criminal Police Office, which is only given to manufacturers, exporters, and, on rare occasions, collectors. The most important ones are: