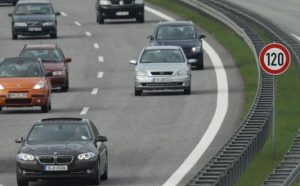 It’s true: there are no speed limits on many sections of German autobahns. But there are plenty of other regulations you should be aware of.

While most traffic rules are the same in Germany as they are in other countries, traffic signs and street markings can be very different as well as confusing. The following is some basic traffic information for driving a vehicle in Germany.

At all times: Always have in your car your driver’s license and International Driver’s Permit, car registration, insurance information, blue parking disk and emergency kit.

Speed control: Beware the cameras that will gladly take your picture if you are speeding – these cameras are in many areas along the Autobahn as well as in the cities.

Lane markings: Lanes going the same direction are separated by dashed white lines. A Solid white line separates the different directions. Yellow lines are to notate a change in the traffic flow in a construction area – not to separate the different sides of the road.

Driving lanes: Stay in right lane whenever possible. After passing, go back to the right lane. The left lane should only be used for passing, especially on the Autobahn. If, while in the left lane, you see someone coming up behind you – get out of the way.

Passing: When passing, pass only on the left, and at a faster speed than the car you are passing. Don’t pass at the same speed – speed up, pass, and then return to the speed you were going. A double white line in the middle means no passing. A solid white line beside a dashed line means passing on the dashed side only. 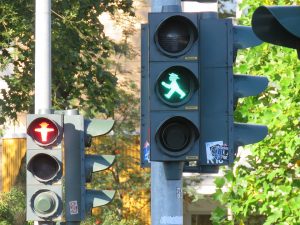 Traffic lights: The colors on the signals represent the same things in Germany as they do just about everywhere else:

You are not allowed to turn right on a red light. The only exception to this is when there is a specific signal with a green right arrow.

If you see a blinking yellow light at an intersection it means stop, then proceed if the intersection is clear. If you run a red light you’ll more than likely be caught. Many German intersections have radar-controlled cameras that are hooked up to traffic lights.

Traffic signs: These are usually posted on the right, so keep an eye out. The ADAC (the German national motor club) has made a very comprehensive list of traffic signs.

Right of way: When no traffic signal is at an intersection, follow these right of way rules:

If there is no sign, then a vehicle entering from the right has the right of way.

There are no 3-way or 4-way stop signs. Likewise, there are also no flashing red lights. If you approach a flashing yellow light, proceed with caution – this does not automatically give you the right of way. 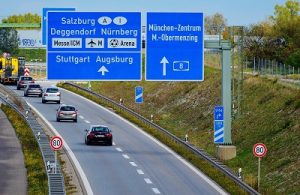 Merging: When merging, observe the “zipper rule” (Reißverschluß), which states that both lanes feed into the continuing lane, alternating cars from each lane. No one lane has priority over the other.

Pedestrian Crossings: Pedestrians crossing the street have the right of way, and you must stop for them. Also, when coming to a stop at an intersection, make sure you do not block the pedestrian crossing.

Traffic Jams: If you find yourself driving into a traffic jam, remember to turn on your hazard lights to warn the drivers behind you. (You can turn them off again once you have a few cars behind you.)

Stalled car: If something happens to your car that is not a serious accident, move it over as far as you can to the right, put your hazard and parking lights on, put your safety vest on and set the warning triangle 100 m (200 m on the highway) away from the car to warn oncoming traffic. Telephones are placed along the Autobahn in case assistance is needed.

Seatbelts: mandatory. Back seat as well.

Gas stations: Not all are open 24 hours, but they do all offer different types of fuel. Make sure you know whether your car uses diesel or benzin (unleaded gasoline).

Cell phone use: It is illegal to use a cell phone while driving.

Baby seats: The baby seat requirements in Germany are different than those in other countries, so it might be easier to rent a baby seat upon arrival instead of bringing one along.