St. Ambrose was born in about 340, most likely in Trier (modern Germany). He was the son of a Roman nobleman who was serving in the northern provinces of the Roman Empire as Prefect of Gallia. Upon the death of his father in about 354 St. Ambrose moved with his family to Rome. The family had become Christian at an early date. In 374 St. Ambrose became the Bishop of Milan. He is known for opposing Arian teachings. St. Ambrose was a prolific writer and teacher. He is designated a Church Father and a Doctor of the Church. St. Ambrose’s feast day is celebraded on December 7 in the Catholic tradition and on April 4 in the Lutheran tradition. 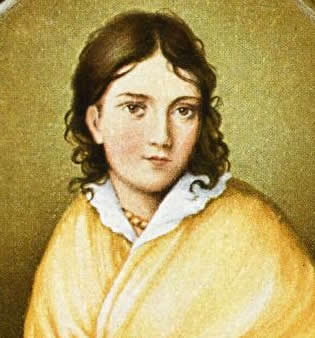 Birth of Bettina von Arnim (1785-1859) in Frankfurt am Main, Germany. Born Elisabeth Brentano, she married the poet Achim von Arnim in 1811 and took his name. She bore seven children and was a devoted mother. She was, however, not satisfied with the purely domestic life. She is the author of the books, Goethes Briefwechsel mit einem Kinde (1835), Die Günderode (1840), Dies Buch gehört dem König (1843), Clemens Brentanos Frühlingskranz (1844) and Gespräche mit Dämonen (1852). She was also a talented sculptor and musician. Her mother had been close friends with Goethe and Bettina too became a good friend of his until 1811 when Goethe’s wife Christiane found the friendship inappropriate.

Birth of Alfred Theophil Holder in Vienna, Austria. Holder was a language scholar. His outstanding works are Altceltischer Sprachschatz (3 vols. 1891-1913) and Germanische Alterthümer (1873). He was the chief librarian at the court and national library in Karlsruhe.

Death of Friederich Weyerhaeuser in Pasadena, California (born in Saulheim, Germany. Weyerhaeuser immigrated to the United States at age 18. After working for a number of years in a sawmill, he began to invest. As his holdings grew he began to buy stands of timber in increasing quantities. His biggest deal was with his neighbor James J. Hill while living in St. Paul, Minnesota. In 1900 he bought 900,000 acres of timberland from Hill in the Pacific Northwest and from it founded the Weyerhaeuser Timber Company.

Death of August Thyssen, founder of the Thyssen steel Company. 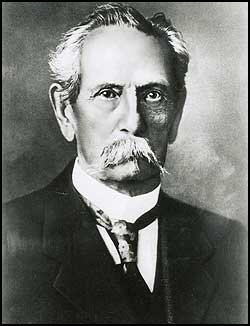 Death of Karl Benz (1844-1929) in Ladenburg, Germany. Benz was a German engine designer and car engineer, generally regarded as the inventor of the gasoline-powered automobile, and, together with Bertha Benz, a pioneering founder of the automobile manufacturer Mercedes-Benz. In 1885 he built the world’s first working automobile powered by an internal combustion engine. He founded the motor company, Benz u. Co. in 1883. The first four wheeled cars began to be produced in 1893. Benz merged with the Daimler-Motoren-Gesellschaft in 1926. It was the Daimler-Benz company which started to produce a car called the Mercedes-Benz. (Siegfried Marcus of Munich had built an automobile as early as 1864 with a gasoline engine, but it was not fully functional.)