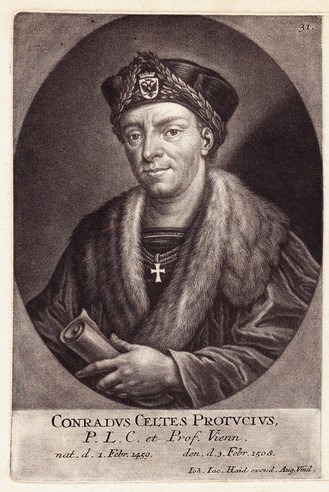 Birth of Conradus Celtis in Wipfeld, Germany. A very successful poet in his day, Celtis was named “Poet Laureate” by the Emperor Friedrich III at Nürnberg in 1487. In 1491 he became professor of poetry at the University of Ingolstadt. In 1497 he was appointed a professor at the University of Vienna. It was he who rediscovered the manuscripts of Hrosvitha von Gandersheim, the great 10th century poet. Celtis died on February 4, 1508 in Vienna.

Death of Augustus II (August der Starke) in Dresden, Germany. Augustus held the titles, Elector of Saxony (after 1694) and King of Poland (after 1696).

Birth of Joseph Keppler in Vienna, Austria. Keppler, an artist, immigrated to the United States in 1867. In 1870 he founded a German language weekly, Puck, in St. Louis. That first attempt was not successful. In 1876 in New York he founded Puck once again. This time it was immensely successful, so much so that in 1877 he founded an English language version which remained in print until 1918. 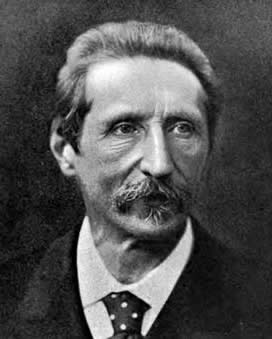 Birth of Eduard Adolf Strasburger (1844-1912) in Warsaw (now in Poland). He was a Polish-German professor who was one of the most famous botanists of the 19th century. Strasburger, a plant cytologist, earned his doctorate at the University of Jena. He taught at the universities of Warsaw, Jena and Bonn. Strasburger developed an accurate understanding of the embryonic sac in gymnosperms and angiosperms. In his Über Zellbildung und Zelltheilung he developed the principles of mitosis and showed also that nuclei can arise only from the division of other nuclei. In 1882 he coined the terms “cytoplasm” and “nucleoplasm”. He discovered that the rise of sap is a physical rather than physiological process.

Birth of Hugo von Hofmannsthal in Vienna, Austria. Hofmannsthal was a poet and dramatist who gained his greatest international note through his collaborations with the composer, Richard Strauss. Hofmannsthal wrote the texts to Elektra (1903), Der Rosenkavalier (1911), Ariadne auf Naxos (1912), and Arabella (1933). Other works by Hofmannsthal include Der Tor und der Tod (1893), Jedermann (1911), and Das Salzburger grosse Welttheater (1922).

Death of Martin Rudolph von Delbrück in Berlin, Germany. He forged the Prussian free-trade policy in cooperation with Otto von Bismarck and was instrumental in convincing the southern German states to join the empire in 1870-1871. 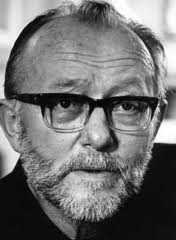 Birth of Günter Eich (1907-1972) in Lebus, Germany. His university studies were in oriental languages at the universities of Leipzig, Paris and Berlin. He began publishing poetry in 1930. His literary career was interrupted by World War II in which he fought as a German soldier. The war ended for Eich as a prisoner of war held by the American army. He resumed his literary career after the war. He continued to publish poetry and then also short stories and radio plays. He was one of the founders of “Gruppe 47”, a post-war group of young authors. During his career he won numerous literary prizes, including the prestigious Büchner Prize.

Death of Friedrich Paulus in Dresden, East Germany. General Paulus was the field marshal who led the German forces in the siege of Stalingrad and was ultimately surrounded there and captured in 1943. This was a turning point in the war. 300,000 German soldiers were suddenly out of the war. After the war he lived in Dresden, East Germany until his death in 1957.

American president John F. Kennedy reaffirms the commitment of the United States to guarantee the freedom of West Berlin. 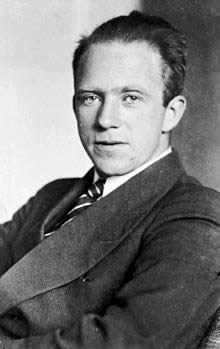 Death of Werner Heisenberg in Munich. He was a German theoretical physicist who was awarded the Nobel Prize in Physics in 1932 “for the creation of quantum mechanics”. Heisenberg, along with Max Born and Pascual Jordan, set forth the matrix formulation of quantum mechanics in 1925. In 1927 he published his uncertainty principle, upon which he built his philosophy and for which he is best known. He also made important contributions to the theories of the hydrodynamics of turbulent flows, the atomic nucleus, ferromagnetism, cosmic rays, and subatomic particles, and he was instrumental in planning the first West German nuclear reactor at Karlsruhe, together with a research reactor in Munich, in 1957.