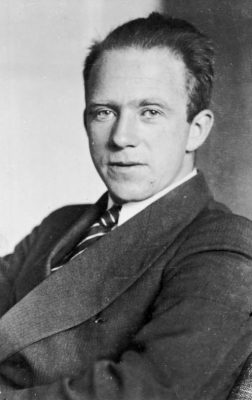 Heisenberg in 1933, as professor at Leipzig University

Werner Heisenberg was a German scientist and philosopher who was influential in the research of quantum mechanics in the mid-1900s. Heisenberg was born on December 5, 1901, in Würzburg, Germany. His father was a professor of medieval and Greek studies. He studied physics under Max Born at the ‘University of Munich’, receiving his doctorate in 1923. The physicist Niels Bohr was also very influential in Werner’s career, under whom the latter learned the nuances of atomic physics.

He became a professor at the ‘University of Leipzig’ in 1927 and began teaching doctoral students. His program was highly sought after and resulted in dozens of important scientific alumni. His teaching often afforded him the opportunity to travel and lecture outside of Germany. He gave lectures in Japan, India, and the United States in 1929. His work creating a neutron-proton model of the nucleus was published in three significant papers. He was honored with the Nobel Prize in 1932 for his discovery.

In 1933, he won the ‘Max Planck Medal’ of the ‘German Physical Society’. The organization is the largest association for physicists in the world.

Heisenberg’s work overlapped with the controversial political history of 20th-century Germany. His substantial theories in physics were published in the 1920s and 1930s.

His paper on quantum mechanics in 1925 was a major scientific breakthrough and led to developments in matrix mechanics. He worked with the Austrian physicist Wolfgang Pauli and the two became close friends.

He developed the uncertainty principle in 1927 while researching at the ‘University of Copenhagen’. This theory established the inverse relationship between the precise position of a particle and its momentum which became a fundamental principle in further physics research. 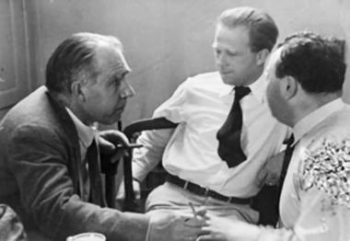 When Hitler assumed control of Germany in 1933, Heisenberg was criticized by the SS for supporting Jewish scientists. In 1941, he left Leipzig to teach at the University of Berlin. He was named director of the important Kaiser Wilhelm Institute for Physics. During the WWII he made important contribution in the development of nuclear reactor and he was also the head of nuclear research during the Nazi period. He was instrumental in rebuilding the scientific community in West Germany after the war. After the war, he was named director of the Max Planck Institute for Physics. He served in that position from 1948 to 1970. He was elected president of the ‘Alexander von Humboldt Foundation’ in 1953. The foundation worked to bring foreign scientists to Germany for work. He proposed a model of atomic nucleus which consisted of protons the positively charged particles and some particles which possessed no charge or the neutrons. His discovery earned him the prestigious Nobel Prize in Physics.

Other than his work on atomic nucleus he also made significant contribution in the fields of ferromagnetism and cosmic radiation. Heisenberg devoted a large portion of his life to teaching as he held important teaching positions at the universities of Copenhagen, Berlin, Leipzig and Munich. He worked closely with the leading German scientists of his generation including Niels Bohr and Max Born, and he advised doctoral students that would go on to contribute significant findings to the fields of physical science. His powerful reputation as a researcher and academic enabled him to lecture widely across Germany and abroad, spreading his theories around the world.

He met Elisabeth Schumacher at a music recital in January 1937 and they were married four months later. The couple enjoyed classical music and Heisenberg was experienced as a pianist. The couple had seven children over thirteen years, including twins in January 1938.

Despite his devotion to science, he was a practicing Lutheran for his entire life. He gave many lectures about science and religion over the course of his career. He suffered from cancer of the gall bladder and kidneys and died on April 1, 1976. He is buried in the famous ‘Munich Waldfriedhof’ cemetery.