Birth of Nathan Adler (1741-1800) in Hannover, Germany. Adler became the rabbi of Oldenburg in 1829 and of Hannover in 1830. In 1844 he became the chief rabbi in London. In London he developed a Jewish college for teachers. In 1870 he was able to establish the United Synagogue, which brought all British congregations under a central administration. 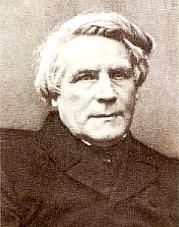 Birth of Heinrich Daniel Ruhmkorff (1803-1877) in Hannover, Germany. He was a German instrument-maker who commercialized the induction coil (often referred to as the Ruhmkorff coil.)

Also, in several of Jules Verne’s science-fiction novels, so-called “Ruhmkorff lamps” are mentioned. These were an early form of portable electric lamp. The lamp consisted of a Geissler tube that was excited by a battery-powered Ruhmkorff induction coil. Initially the lamp generated white light by using a Geissler tube filled with carbon dioxide. However, the carbon dioxide tended to break down. Hence in later lamps, the Geissler tube was filled with nitrogen (which generated red light), and the glass was replaced with glass containing uranium salts (which fluoresced with a green light).

Birth of Freud’s mentor, Josef Breuer in Vienna. Breuer’s famous “Anna O.” (Bertha Pappenheim) was cured of “hysteria” through hypnosis and Breuer’s “talking cure”. This was the starting point for psychoanalysis which Freud later developed. 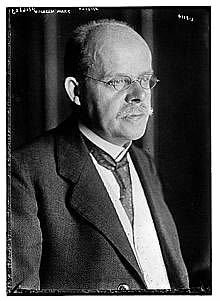 Birth of Wilhelm Marx (1863-1946) in Cologne, Germany. Marx, a member of the Catholic Center Party, was Chancellor of the Weimar Republic on two occasions. He was the founder and first president of the Catholic Schools Organization.

Birth of Edward Teller in Budapest, Austro-Hungarian Empire. Teller studied chemical engineering at the Institute of Technology in Karlsruhe, Germany and continued studies toward the doctorate in physical chemistry at the universities of Munich and Leipzig. He taught at the University of Göttingen from 1931-1933. His Jewish background necessitated a flight to the United States in 1935. In the U.S. he taught at George Washington University. In 1941 he joined Enrico Fermi at the University of Chicago in work on nuclear fission. In 1943 he joined Robert Oppenheimer at the Los Alamos Laboratory. After the war his work contributed to the development of a hydrogen bomb. Under President Reagan, Teller was instrumental in the development of the “Strategic Defense Initiative”.

Death of Hermann Bahr in Munich, Germany. Bahr was a dramatist who represented through time Naturalism, Romanticism and finally, Symbolism.