Death of St. Norbert von Xanten (ca. 1080 – 1134) St. Norbert was born in about 1080 in Xanten, Germany. He was ordained a priest when he was 35. He gave away all his many properties and dedicated his life to God. In 1119 at the direction of Pope Calixtus II, Norbert founded a religious order at Prémontré (modern France). After success there, Norbert returned to Germany and founded abbeys in Westphalia. The order of St. Norbert grew quickly. In 1125 he traveled to Rome to obtain reconfirmation of his order from the new Pope, Honorius II. The confirmation of the order is dated February 27, 1126. Soon thereafter he would be made the Archbishop of Magdeburg. He died in 1134 and was entombed in the Norbertine Abbey in Magdeburg. 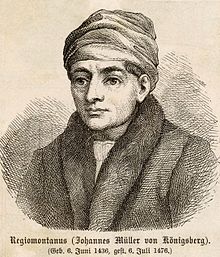 Birth of Regiomontanus (Johann Müller) (1436-1476) in Königsberg (now Kaliningrad). He was extensively responsible for the modern rediscovery of trigonometry from Greek manuscripts on Ptolemy.

Death of Johannes Reuchlin in Bad Liebenzell, Germany. Reuchlin was a scholar of ancient Greek and Latin who also developed a keen interest in Hebrew language and literature. In 1509 the Cologne Dominican, Johannes Pfefferkorn, persuaded the Emperor to order the destruction of Hebrew books because they were a danger to Christianity. Reuchlin’s principles could not tolerate this and he actively protested the ruling. As a result he was brought before the inquisition. Due to an outcry by a wide segment of intellectuals of the day, however, he was acquitted of heresy. This experience did not drive Reuchlin from the church. When his nephew Philip Melanchthon joined with Martin Luther in the Reformation Reuchlin sided with the church against his nephew.

Birth of Ernst Wilhelm von Brücke in Berlin. Brücke was a physiologist who was one of those early researchers who led the way in introducing physical and chemical methods into medical research.

Birth of Friedrich Bayer in Barmen, Germany. He was the founder of the Bayer chemical company. (Not to be confused with Adolf Baeyer, a great chemist at the University of Munich, 1835-1917) 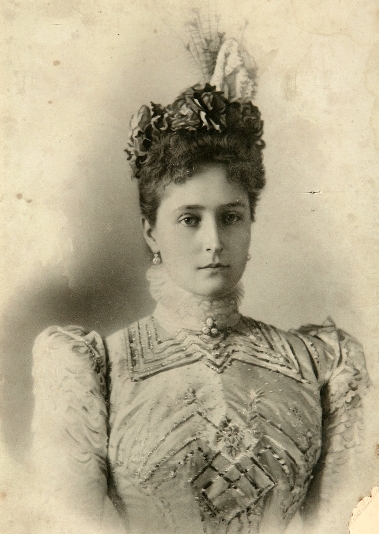 Birth of Alexandra (Alix, Princess von Hesse-Darmstadt) (1872-1918), wife of Russian Emperor Nicholas II. Born in Darmstadt. Alexandra was Empress consort of Russia as spouse of Nicholas II, the last Emperor of the Russian Empire. Born a granddaughter of Queen Victoria of the United Kingdom, she was given the name Alexandra Feodorovna upon being received into the Russian Orthodox Church, which canonized her as Saint Alexandra the Passion Bearer in 2000.

Alexandra is best remembered as the last Tsarina of Russia, as one of the most famous royal carriers of the haemophilia disease, and for her support of autocratic control over the country. Her friendship with the Russian mystic, Grigori Rasputin, was also an important factor in her life. 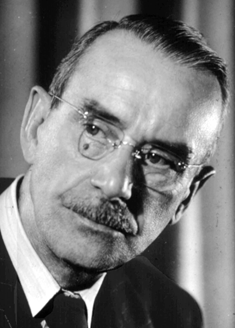 Birth of Thomas Mann (1875-1955) in Lübeck, Germany. Thomas Mann was certainly one of the greatest German novelists of the 20th Century. He won the Nobel Prize for Literature in 1929. Novels which have gained him world wide recognition as a writer include Der Zauberberg, Der Tod in Venedig, Lotte in Weimar, and Doktor Faustus. Mann acknowledged a strong influence of the philosophers Arthur Schopenhauer and Friedrich Nietzsche as well as the composer, Richard Wagner. Early on he spoke out against the growing Nazi party. He was on vacation in Switzerland in 1933 when Hitler became chancellor. Mann refused to return to Germany. In 1936 his German citizenship was revoked. He stayed in Switzerland until 1938 when he immigrated to the United States. After the war he refused to return to Germany. In 1952 he returned to live in Switzerland.

Birth of Manfred Joshua Sakel in Nadvorna, Austria-Hungary (now Ukraine), educated in Vienna, worked in Vienna and Berlin. A psychiatrist who developed insulin-shock therapy for schizophrenia.

Birth of Heinrich Bohrer, a Swiss physicist who received the Nobel Prize for Physics for the scanning tunneling microscope.

D-Day (landings at Normandy, France by the Allies in World War II).

Death of Gerhardt Hauptmann in Agnetendorf, Germany. The dramatist, poet, novelist Gerhardt Hauptmann won the Nobel Prize for Literature in 1912. During his writing career he moved from his beginnings in Naturalism to a kind of mystic, neo-romanticism. Among his works are Vor Sonnenaufgang, Die Weber, Das Friedensfest, Hanneles Himmelfahrt and Der Biberpelz.

Death of Carl Jung in Küsnach, Switzerland. The founder of analytic psychology. He developed the concepts of extroverted and introverted personality, archetypes and the collective unconscious. He worked closely with Freud between 1907 and 1912.

The body of Dr. Joseph Mengele is exhumed from a grave in South America to try to confirm his identity. Mengele had performed medical experiments on prisoners in Nazi concentration camps during World War II. He had lived undetected by war criminal hunters for his entire life after the war. When he was identified after his death, the investigators wanted to be sure it was really him and not another ruse.