Birth of Heinrich Brüning in Münster, Germany. Brüning, a member of the Catholic Center Party, became chancellor of the Weimar Republic in 1930. Although he was considered an economics expert, the world depression along with the reparation payments of the Versailles Treaty made economic stability in Germany impossible. Unemployment increased dramatically and there was a drastic fall in the standard of living. As the situation grew more and more chaotic, he made use of Article 48 in the constitution and governed by presidential emergency decree. Hoping to bring about a more workable situation, he dissolved parliament (Reichstag) and called for new elections in September, 1930. The plan was a disaster, for it was in that election that the Nazi party gained considerably in the new parliament. In 1932 Brüning resigned. He left Germany in 1934 and found his way to the United States where he taught political science at Harvard University from 1937 to 1952. 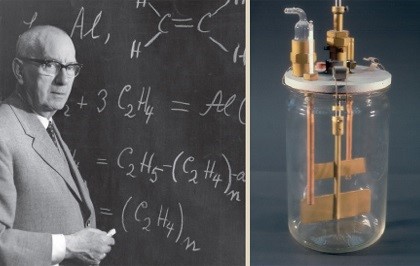 Birth of Karl Ziegler in Helsa, Germany. Ziegler was a professor of chemistry at the Universities of Heidelberg and Halle. Later he was director of the Max Planck Institute at Mülheim. (At that time it was called the Kaiser Wilhelm Institute.) Ziegler won the Nobel Prize for Chemistry in 1963 for his work on polymers. Ziegler was the first to explain the process involved in the synthesis of rubber.He is also known for his work involving free-radicals, many-membered rings, and organometallic compounds, as well as the development of Ziegler-Natta catalyst. One of many awards Ziegler received was the Werner von Siemens Ring in 1960 jointly with Otto Bayer and Walter Reppe, for expanding the scientific knowledge of and the technical development of new synthetic materials.

Birth of Bruno Hauptmann in Kamenz, Germany. After having trouble with the law in Germany he came illegally to the United States where he also built a criminal record. In 1932 the child of Charles Lindbergh was kidnapped and later murdered. In 1934 Bruno Hauptmann was arrested for the crime. In 1936 he was executed. Hauptmann insisted on his innocence to the end.

The new Russian revolutionary government abandons all war efforts in WWI. A truce will be signed on December 15.