Feast day of St. Pantalus (ca. 304 – ?). St. Pantalus is thought to have been the first bishop of Basel, Switzerland. Available documentation indicates that he was a Martyr. By the 12th century his story had become interwoven with the legends of St.Ursula. According to those legends he met St. Ursula on her return trip from Rome to Cologne and accompanied her to Cologne, where he, along with Ursula and her many companions, was killed by the attacking Huns. A scull was found in Cologne in the middle ages which was said to be that of St. Pantalus. The scull is preserved today in the historical museum in Basel. Pantalus’ stature as a saint predates the practice of canonization by a Pope. The feast day of St. Pantalus is October 13. 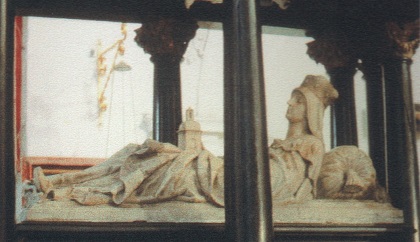 Death of St. Hedwig von Schliesen. St. Hedwig von Schlesien was born in a castle near Lake Ammer (Bavaria) in 1174. She was educated in the monastery of Kitzingen. At age 12 she was married to Duke Heinrich I of Silesia. She dedicated herself to the spread of Christianity, care for the poor and sick and the founding of women’s’ monasteries. As personal mortification she developed the pattern of walking barefoot in the winter. The local bishop ordered her to wear shoes. To obey him and yet continue to do penance, she wore shoes in the winter, but on her hands. She was canonized in 1267 by Pope Clement IV. Germans exiled from Silesia after World War II have taken her as a special patron. (It was to large extent through the christianization efforts of Hedwig and Heinrich that the area of Silesia took on a German cultural patter.) She has become a patron of all who are driven from their homelands. Her feast day is celebrated in the Lutheran tradition on October 15, but in the Catholic tradition on October 16.

Birth of Heinrich Julius near Wolfenbüttel, Germany. Heinrich Julius wrote early Baroque dramas. He was Rektor of the University of Helmstedt and Bishop of Halberstadt. Using his family wealth he brought English actors and the English dramatic arts to Wolfenbüttel. Plays by Heinrich Julius include Von Vincentio Ladislao, Von einem Ungeratnen Sohn and Von einer Ehebrecherin.

Birth of Friedrich Wilhelm IV in Köln, Germany. He was the King of Prussia during the Revolution of 1848. His conservative politics were one of the factors leading to the revolution. In union with Austria, he saw the Habsburg domination as a natural law of history. In 1849 he was offered the imperial crown by the national assembly in Frankfurt. He refused it, for he felt that only the aristocracy (not an assembly) had the right to offer it. 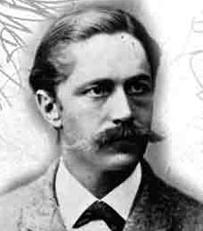 Birth of Daniel Schreber in Leipzig, Germany (Schrebergärten). Schreber noticed that the people living in the large cities did not have the pleasure and the produce of gardens. Thus he came up with the idea of allowing people to use garden plots on the edges of cities and in areas not suited for homes (such as near rail tracks). This idea has been very popular in Germany ever since. In every large city you will find many such gardens in which the people who use them erect little garden houses, grow vegetables and flowers and spend many very pleasant hours in the summer working in their gardens, sipping a beer and/or just sitting in front of their little garden houses enjoying the sun and the summer breezes. Many people when they see these little plots, with their tiny little houses, think they are slums. But in fact, people don’t live there. They are simply their gardens. They are named after the founder of the idea and are called Schrebergärten.

Death of Karl Philipp Fürst zu Schwarzenberg in Leipzig, Germany (born in Vienna, Austria). Schwarzenberg was an Austrian field marshal in the wars against Napoleon. His troops actually joined with Napoleon in the 1812 war against Russia, but in 1813 Schwarzenberg led his forces against the French. He was the Allied commander in chief at the Battle of Leipzig.

Karl Marx enrolls at the University of Bonn.

Birth of Friedrich Nietzsche in Röcken, Germany. He was a German philosopher, poet, composer, cultural critic, and classical philologist. Nietzsche’s key ideas include the “death of God”, the Übermensch, the eternal recurrence, the Apollonian and Dionysian dichotomy, perspectivism, and the will to power.

Birth of Wilhelm Miklas in Krems, Austria. Miklas was the President of the Austrian Republic from 1928-1938. He resigned his office in 1938 when Austria united with Germany. 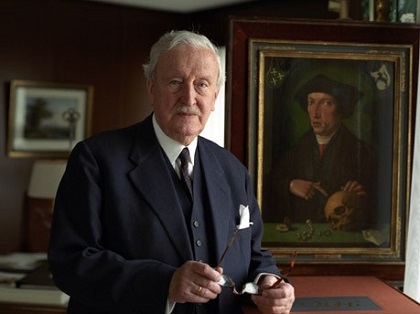 Birth of Hermann J. Abs in Bonn, Germany. Abs was a banker who played a substantial role in the “Economic Miracle” of the 50’s in Germany. He had been with the Deutsche Bank in Berlin. In 1948 he was appointed to the Kreditanstalt für Wiederaufbau, distributing money from the Marshall Plan. He was head of the German team which negotiated at the London debt conference in 1951-1953. When the Deutsche Bank was reestablished in Frankfurt in 1957, Abs rejoined it and became the chair of the Aufsichtsrat in 1959.

Suicide of Hermann Göring in Nürnberg, Germany. Young Göring joined the German air force in 1912 and served with distinction. In 1918 after the death of the famous “Red Baron”, Manfred von Richthofen, Göring was named to head the Red Baron’s squadron. He joined the Nazi party in 1922. He became the head of Germany’s air force and was one of the highest ranking Nazis. After the war he was tried at the war crimes trials, but was able to hide poison in his cell and committed suicide before he could be hanged.