The Irrational Genius, or Why Am I so Wise?

The cure for love is still in most cases that ancient radical medicine: love in return.
— Friedrich Nietzsche 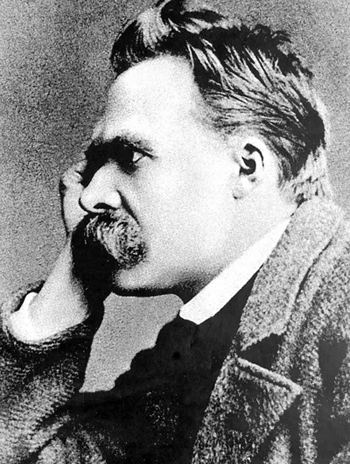 Friedrich Wilhelm Nietzsche was born on October 15, 1844 in a small Prussian town of Roecken. The date of his birth coincided with the 49th birthday of the Prussian King, Friedrich Wilhelm IV, after whom Nietzsche was named, and who had been responsible for Nietzsche’s father’s appointment as Roecken’s town minister. When Nietzsche was 4 years old, his father, Karl Ludwig Nietzsche died from a brain ailment in the age of 36, and the death of Nietzsche’s two-year-old brother, Joseph, followed half a year later. After the father’s death the whole family moved to Naumburg, where the little Fritzchen lived and was brought up by his five female relatives – his mother, his grandmother, his two aunts and the younger sister Elizabeth who would later take care of Nietzsche and his archive.

As a schoolboy, Fritzchen already revealed his intellectual gift. He found it boring to play with his neighbors’ children and despised them. In turn, they never played with him either, and called him “the little minister”.

When Nietzsche was 14, he went to the boarding school Schulpforta, where he prepared for the university. This was his chance to get away from the excessive care of his family where he was adored for being the only male. It was at this time that the young philosopher first suffered from the migraine headaches that were to be with him for most of his adult life. During his summer holidays spent in Naumburg, Nietzsche led a music and literature club “Germania” where he first got acquainted with Richard Wagner’s music. After graduating from Schulpforta, Nietzsche entered the University of Bonn in 1864 as a theology and philology student. 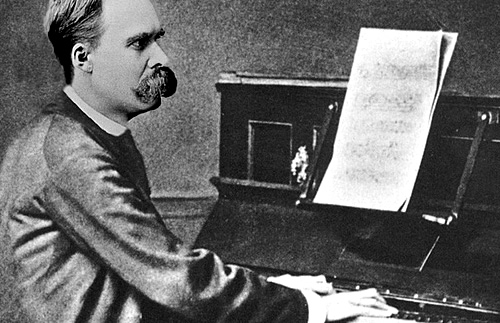 There he enjoyed the free, college students’ privileged adolescent life more than anything else with beer, wine, sex and tobacco, etc. It is said that at this time he contracted syphilis which affected him in his second half of life. His spending exceeded the money sent from his family and he started getting tired of such life anyway and transferred himself to University of Leipzig where he came under the influence of Schopenhauer’s non-rational philosophy of will expressed in The World as Will and Idea. Nietzsche was deeply influenced by him and his thought. However, by nature Nietzsche was not rational, but was, from the beginning of philosophical study, deeply attracted to non-rational elements of reality, which in Schopenhauer’s philosophy was the concept of will.

In 1867, as he approached the age of 23, Nietzsche entered his required military service and was assigned to an equestrian field artillery regiment close to Naumburg. There he had the first accident connected with the horse. While attempting to leap-mount into the saddle upon a particularly unruly horse, he suffered a serious chest injury and was dismissed after his chest wound was too slow to heal. The second horse accident 22 years later will be the last event in his sane life.

Shortly thereafter he returned to the University of Leipzig. Late in 1868, Nietzsche met the composer Richard Wagner. Wagner and Nietzsche shared an enthusiasm for Schopenhauer, and Nietzsche, who had been composing piano, choral and orchestral music since he was a teenager, admired Wagner for his musical genius and magnetic personality. Wagner was exactly the age Nietzsche’s father would have been, and had also attended the University of Leipzig many years before. The Nietzsche-Wagner relationship was very friendly, almost familial, sometimes stormy, and it affected Nietzsche deeply: twenty years later, he would still appreciate Wagner’s cultural significance.

As he was thought to be a brilliant student, the University of Basel called him to the chair of classical philology at the age of 24, even though he had not received his doctorate. Arrangements were hastily made for the doctorate to be awarded after his appointment, and Nietzsche taught at Basel from 1869 to 1879 when he was forced to retire due to ill-health… In the fall of 1870, as Bismarck‘s war against France was in full swing, Nietzsche tried to join the army again. However, he was not qualified as a soldier, but as he enlisted himself for the German ambulance service, he took close care of wounded soldiers, contracted diphtheria and dysentery, and subsequently experienced a painful variety of health difficulties for the rest of his life.

As he stopped teaching at Basel University in 1879, Nietzsche traveled a lot, circling between French, Swiss, German and Italian cities. On a visit to Rome in 1882, Nietzsche, now at age thirty-seven, met Lou Salomé, a twenty-one-year-old Russian-Jewish woman who was studying philosophy and theology in Zurich. He soon fell in love with her, and twice proposed to her. Both offers were rejected, and the relationship was also spoiled by Nietzsche’s sister Elisabeth who was absolutely anti-Semitic, and hated the Jewish blood in Lou. Thus Nietzsche has lost his love, and remained alone.

In the morning of January 3, 1889, while in Turin, Nietzsche had a mental breakdown which left him an invalid for the rest of his life. Upon witnessing a horse being whipped by a coachman at the Piazza Carlo Alberto, Nietzsche threw his arms around the horse’s neck and collapsed, never to return to full sanity. Some argue that Nietzsche was afflicted with a syphilitic infection (this was the original diagnosis of the doctors in Basel and Jena) contracted either while he was a student or while he was serving as a hospital attendant during the Franco-Prussian War; some claim that Nietzsche’s use of chloral hydrate, a drug which he had been using as a sedative, deteriorated his already weakened nervous system; some speculate that Nietzsche’s collapse was due to a brain disease he inherited from his father. Anyway, his creative life stopped, and until his death on August 25, 1900 Nietzsche was completely insane.

“Why am I so wise?”, “Why am I so clever?”, “Why am I a destiny?” — with these words Nietzsche finished one of his last works on 1888 – his autobiography Ecce Homo, How One Becomes What One Is. In this work Nietzsche examined all his works and described himself as “a follower of the philosopher Dionysus, the god of life’s exuberance” who, he hoped, would replace Jesus, the god of the heavenly other world, as the primary cultural standard for future millennia.