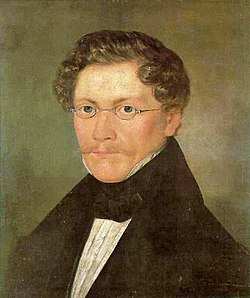 Carl Spitzweg (born on February 5, 1808 – died on September 23, 1885) was a German romanticist painter, especially of genre subjects. He is considered to be one of the most important artists of the Biedermeier era. The Biedermeier period refers to an era in Central Europe between 1815 and 1848, during which the middle class grew in number and arts appealed to common sensibilities. Biedermeier themes in visual arts reinforced feelings of security, Gemütlichkeit, traditional pieties and simplicity, eschewing political and social commentary during the epoch. Thus, the techniques, while classic in nature were of the utmost importance to reach a realistic rendering. Regarding the thematic, the technique was seen not only as a narrative medium to tell the past in anecdotal vignettes, but also to represent the present.

Spitzweg was born in Unterpfaffenhofen, the second of three sons of Franziska (née Schmutzer) and Simon Spitzweg. His father, a wealthy merchant, had Carl trained as a pharmacist. He attained his qualification from the University of Munich but, while recovering from an illness, he also took up painting. Spitzweg was self-taught as an artist, starting out by copying the works of Flemish masters. He contributed his first work to satiric magazines. Upon receiving an inheritance in 1833, he was able to dedicate himself to painting.

Later, Spitzweg visited European art centers in Prague, Venice, Paris, London, and Belgium studying the works of various artists and refining his technique and style. His later paintings and drawings are often humorous genre works. Many of his paintings depict sharply characterized eccentrics, for example The Bookworm (1850) and The Hypochondriac (c. 1865, in the Neue Pinakothek, Munich).

It’s more said his about paintings than his life, and his much-loved paintings are among the most targeted by thieves. 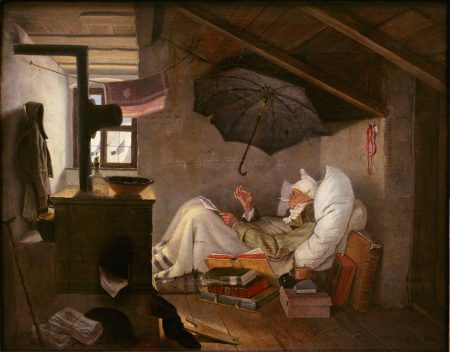 Germans rank Spitzweg’s The Poor Poet second only to Leonardo da Vinci’s Mona Lisa among their all-time favorite paintings. It is small compared to most paintings and at only 36 X 45 cm has proven a fairly desirable target for thieves. The Poor Poet has been stolen twice. A daring day-time robbery in 1989 that involved speed and the ruse of a wheelchair-bound art patron left the Charlottenburg Palace in Berlin without this famous painting and The Love Letter, another much loved work by Spitzweg. Both paintings remain unaccounted for. 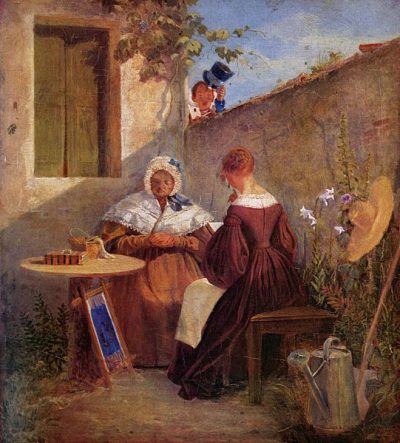 In 1992, the German Federal Crime Department added 36 Spitzweg paintings to their list of missing works. Leaving the art world to assume that all 36 works had been recently stolen from their owners.

Spitzweg’s works are not so much admired for their technique or school of painting as much as they are for their subject matter. Spitzweg often included satire within each work and instead of creating just a portrait or a landscape, he created a humorous look into life in the middle class. One historical reference of the artist referred to him as a “genius who united in himself three qualities which seem to be contradictory – realism, fancy and humor.” Many in the art world liken viewing his paintings to wandering through an old German town of the 1840s.

Spitzweg lived alone in a small garret room perched above the beautiful Bavarian town of Rothenburg ob der Tauber. He lived a fairly monastic lifestyle and he was often seen gazing down at the town below, perhaps seeking inspiration and details for a current or future work.

Perhaps it comes from living in a fairy-tale setting or the fact that he was a pharmacist prior to taking up painting and began painting for the sheer joy of it, Spitzweg’s works capture a bit of our humanity as they poke fun at life in general. All of this makes Spitzweg a much-loved painter and his works a source of joy and contentment.