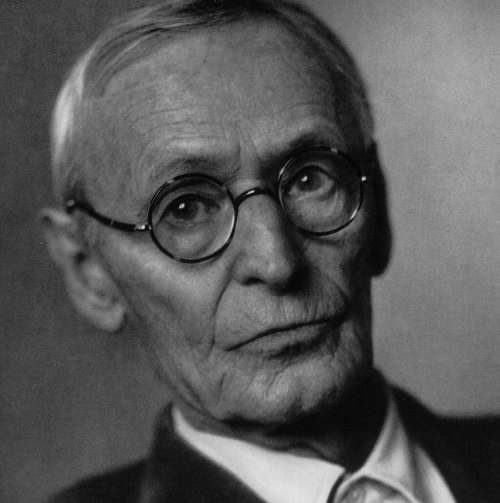 German literature is rich in talented people with extraordinary views and lifestyle. One of them, to our opinion, is worth of special attention – Hermann Hesse. He was born into a family of Pietist missionaries in the German state of Wüttenberg on July 2, 1877. The boy was expected to continue his family way, but Hesse disappointed his parents: he was expelled from Protestant seminary at Maulbronn in 1891.

After that the range of his creative activity was very wide: he was German Swiss poet, novelist, and painter. In 1946 he received the Nobel Prize in Literature. Other awards were Honorary Doctorate from the University of Bern,Wilhelm-Raabe-Preis, Peace Prize of the German Book Trade etc.

Hermann Hesse’s works explore an individual’s search for authenticity, self-knowledge and spirituality. Maybe, it is connected with his own hard way to his real calling. Hesse had many questions with no answers. Constant search for new impressions was the reason of his strong desire to travel. In 1901 Hermann Hesse undertook to fulfill a long-held dream and traveled for the first time to Italy. In the same year Hesse changed jobs and began working at the antiquarium Wattenwyl in Basel.

The novel Peter Camenzind, made him famous and Hesse could make a living as a writer. After that he married Maria Bernoulli and settled down with her in Gaienhofen on Lake Constance. They were unhappy together. In this period Hesse was fascinated by Schopenhauer’s works and theosophy, it caused his interest in India. So, being depressed because of family dissonance, in 1911 Hesse left alone for a long trip to Sri Lanka and Indonesia. It had a great impact on his future work (his novel Siddhartha was the result of the love for Indian culture and Buddhist philosophy).

Life prepared many crosses for Hermann Hesse: the First World War (he was a volunteer with the Imperial army), his father’s death, the serious sickness of his son Martin, and his wife’s schizophrenia. In 1919 he moved to Montagnola and worked out his literary projects, began to paint. The writer made an attempt to create a happy family with the singer Ruth Wenger, whom he married in 1924. Their relationships were complicated and unstable.

In 1923 Hesse received Swiss citizenship. There he wrote autobiographical narratives Kurgast(1925) and The Nuremberg Trip (1927), later – Steppenwolf. He married again. His third wife was art historian Ninon Dolbin. She became not only his wife, but his companion, whom Hesse could trust.

The last Hesse”s major work The Glass Bead Game was printed in 1943 in Switzerland. For this work he was awarded the Nobel Prize. During the last twenty years of his life Hesse wrote many short stories, poems and essays.

Hermann Hesse died on August 9, 1962 and was buried in the cemetery at San Abbondio in Montagnola.