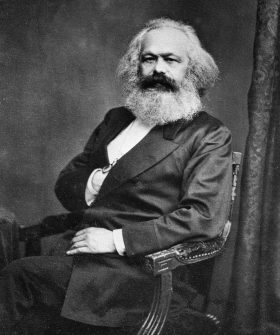 He published (with Friedrich Engels) Manifest der Kommunistischen Partei (1848), commonly known as The Communist Manifesto, the most celebrated pamphlet in the history of the socialist movement. He also was the author of the movement’s most important book, Das Kapital. These writings and others by Marx and Engels form the basis of the body of thought and belief known as Marxism.

His father was a successful lawyer who had converted from Judaism to Christianity in order to help his law career.

At the age of 17, Karl Marx enrolled in the University of Bonn to study Law. He was not the most diligent student, enjoying drinking societies and meeting friends. His father eventually had him transferred to the University of Berlin, which had a stricter reputation. During his time at University, Marx increasingly became attracted to radical ideas and philosophies. For a time he associated with a group known as the ‘Young Hegels’ – those students who rejected the ideas of Hegel. 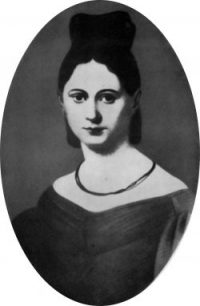 Jenny von Westphalen in the 1830s

Jenny von Westphalen and Karl Heinrich Marx regularly met each other as children. She was four years older than Karl. They became close friends as teenagers. Both of them were well-read and literary, and they soon began courting. According to Marx, she was the most beautiful girl in the town of Trier. Her father, Ludwig von Westphalen, a friend of Marx’s father, also befriended the teenage Marx, and would often go on walks with him, where they would discuss philosophy and English literature. Jenny and Karl became engaged in 1836. They eventually married on 19 June 1843 in the Kreuznacher Pauluskirche (the Kreuznach church of Saint Paul), Bad Kreuznach.

Following their marriage, Karl and Jenny Marx moved to Rue Vaneau in Paris and befriended the German poet Heinrich Heine.

Karl and Jenny Marx had the following seven children, in chronological order:

Paris in the 1840s was a hotbed of revolutionary activity. Here, Marx met many revolutionaries such as Frederick Engels – an English radical. These two were to become lifelong friends and supporters; Engels would later become the chief source of the financial support for Marx.

Engels wrote an influential book The Condition of the Working Class in England in 1844. This helped Marx develop his idea of a proletarian revolution. This led to Marx’s first work – Communism Economic and Philosophical Manuscripts of 1844. This philosophical work sought to show Communism as a moral force for good to overcome the alienation of labor under capitalism.

Marx also became interested in the development of history and the changes which inevitably passed through society. He termed this idea – historical materialism. Marx increasingly began to believe that a Proletarian (Communist revolution) was not just desirable, but, an inevitable consequence of historical evolution. 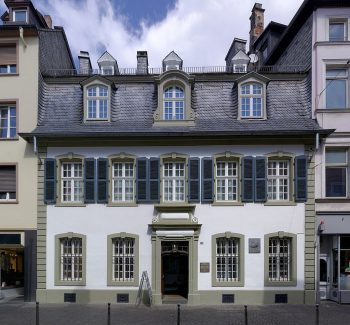 Marx’s birthplace, now Bruckenstrasse 10, in Trier. The family occupied two rooms on the ground floor and three on the first floor. Purchased by SPD in 1928, it now houses a museum devoted to him.

This period led up to Marx and Engel’s most famous work – A short pamphlet titled ‘ The Communist Manifesto‘. Unlike the majority of Marx’s work, this Manifesto was short, to the point and included fiery, inspirational language, designed to awaken the desire for revolution.

After the revolutions which swept Europe in 1848, Marx increasingly found himself under suspicion and scrutiny from French and Belgian authorities. He decided to flee to London and continue his work from there.

In London, Marx became more involved with the burgeoning Communist Movement. He was influential in the First Congress of the international, where he sought to argue against the anarchist wing led by Mikhail Bakunin.

Another influential event was the Paris Commune uprising of 1871, though defeated after two months. Marx enthusiastically supported this as being a forerunner of future Communist revolutions.

Marx spent considerable time in the British Library researching political economy. This led to his deepest work – Das Capital – a dense and thorough examination of Capitalist society and economy.

From 1850 to 1864 Marx lived in material misery and spiritual pain. His funds were gone, and except on one occasion he could not bring himself to seek paid employment. In March 1850 he and his wife and four small children were evicted and their belongings seized. Several of his children died—including a son Guido, “a sacrifice to bourgeois misery,” and a daughter Franziska, for whom his wife rushed about frantically trying to borrow money for a coffin. For six years the family lived in two small rooms in Soho, often subsisting on bread and potatoes. The children learned to lie to the creditors: “Mr. Marx ain’t upstairs.” Once he had to escape them by fleeing to Manchester. His wife suffered breakdowns. 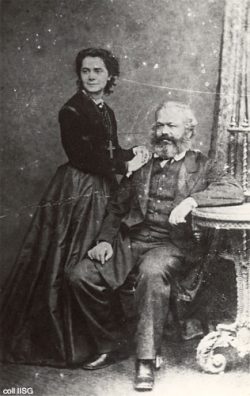 During all these years Engels loyally contributed to Marx’s financial support. The sums were not large at first, for Engels was only a clerk in the firm of Ermen and Engels at Manchester. Later, however, in 1864, when he became a partner, his subventions were generous. Marx was proud of Engels’s friendship and would tolerate no criticism of him.

Marx’s political isolation ended in 1864 with the founding of the International Working Men’s Association. Although he was neither its founder nor its head, he soon became its leading spirit. Its first public meeting, called by English trade union leaders and French workers’ representatives, took place at St. Martin’s Hall in London on September 28, 1864. The International grew in prestige and membership, its numbers reaching 800,000 in 1869. It was successful in several interventions on behalf of European trade unions engaged in struggles with employers.

Marx’s ideas have had a profound impact on world politics and intellectual thought. Followers of Marx have frequently debated amongst themselves over how to interpret Marx’s writings and apply his concepts to the modern world. 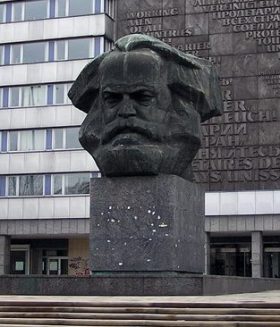 The Karl Marx Monument is a 7.10m-tall stylized head of Karl Marx in Chemnitz, Germany (former Karl Marx Stadt). The heavy-duty sculpture, together with the base platform, stand over 13 meters tall and weights approximately 40 tons.

From an academic perspective, Marx’s work contributed to the birth of modern sociology. He has been cited as one of the nineteenth century’s three masters of the “school of suspicion” alongside Friedrich Nietzsche and Sigmund Freud and as one of the three principal architects of modern social science along with Émile Durkheim and Max Weber. In contrast to other philosophers, Marx offered theories that could often be tested with the scientific method.

During the next and last decade of his life, Marx’s creative energies declined. He was beset by what he called “chronic mental depression,” and his life turned inward toward his family. He was unable to complete any substantial work, though he still read widely and undertook to learn Russian. He was broken by the death of his wife on December 2, 1881, and of his eldest daughter, Jenny Longuet, on January 11, 1883. He died in London, evidently of a lung abscess, in the following year. He was buried at Highgate cemetery London.