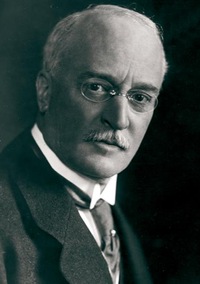 Circumstances of Rudolf Diesel’s death are considered to be a suspicious enigma for us even now.

Dr. Rudolf Diesel boarded “SS Dresden”, a cross-channel ferry, at Antwerp in September 1913. He was going to see the newest diesel engine factory of London. The famous engineer was invited as a guest of honor to the opening of that factory. He was traveling alone. After dinner Rudolf Diesel went to his cabin at about 10 p.m. and that was the last time anyone saw him alive. His cabin turned out to be absolutely empty next morning on September, 30. There were only his coat and hat left on the deck.

Ten days later, Dutch fishermen found an unknown body in the stormy waters of the North Sea. Seamen realized that he was a rich man as he wore expensive clothes. Their boat was too small and that’s why they took only his papers and belongings and threw the body back into the sea.

Rudolf Christian Karl Diesel (born 18.03.1858 in Paris – died 30.09.1913 on the English Channel) was an exceptional German inventor of the famous Diesel engine, talented engineer, and “the James Watt of the late nineteenth century”.

He spent his peaceful childhood with the friendly Diesel family in Paris. Rudolf was a very stubborn and persistent young man who loved music and art. He spoke English, German and French.

Family happiness was broken by the Franco-Prussian War. The Diesels were deported to London. Rudolf lived with his relatives in Augsburg where he studied at the Royal Country Trade School. He became an extraordinary student at Technische Hochschule of Munich.

The idea of inventing a high economical engine appeared in Diesel’s mind when he was a student. Carl von Linde, the pioneer of refrigeration, and his lectures influenced young Diesel and sparked his interest in engines. Now he knew what the sense of his life was.
Diesel was a hard-working engineer who dedicated all of his spare time to the invention of a new engine. At the same time he had to earn a lot of money to help his family in France. But fortune favors the brave. At last the success came to him in 1892. Diesel was granted a German patent for the engine, named after him.

Working in Paris, Rudolf Diesel married a young governess Martha Flasche.
In 1883 Diesel published a book titled “Theory and a Rational Thermal Engine to Replace the Steam Engine and the Combustion Engines Known Today”. It described major methods of his engine work that relied on a high air temperature, caused by extreme compression of the fuel to ignite it, eliminating the spark plug. “It is the diesel’s higher compression ratio that leads to its greater fuel efficiency. Because the air is compressed, the combustion temperature is higher, and the gases will expand more after combustion, applying more pressure to the piston and crankshaft”.

Besides, Diesel was sure that his engine “can be fed with vegetables oils and would help considerably in the development of agriculture of the countries which use it’. That’s why his invention was originally known as the “oil engine”. Diesel gave us a hi-tech and energy option that could become an alternative to petroleum.

The first functional engine prototype was built at Maschinefabrik Augsburg plant in July 1893. That engine test finished with a serious explosion that practically killed Diesel. Several first engine samples were not successful at all. Engines were huge in size, heavy and dangerous. Their inventor heard a lot of reproaches, but nevertheless he didn’t put down the work of his life. He was famous and rich. But Diesel couldn’t enjoy his achievement any more. A not-yet-ready engine, bad investments and frequent headaches made him nervous. Diesel continued working like crazy on the engine developing; himself criticizing it and that badly affected his health and mood. He was under depression when he found himself a bankrupt.

Some biographers believe his death was accidental in the waters of the English Channel. Most historians are sure that it was a desperate suicide, as Diesel already had a kind of a mental break-down. But his family never accepted that Diesel’s death was self-inflicted; they were sure he was intentionally thrown off the ship and his invention ideas were stolen. Another point of view on his death is in Diesel “bio-oil’ fuel solution. His thoughts might have meant the end of petroleum monopoly and its profits. Others suspected political motives and that he was murdered by the German representatives to prevent Diesel from telling the results of his invention to their opponents in the future World War I.

In any case Rudolf Christian Karl Diesel is a prominent personality in the history of engine building. His engines are alive and they keep our cars, ships, boats, tractors, electric generators, submarines, etc. going.