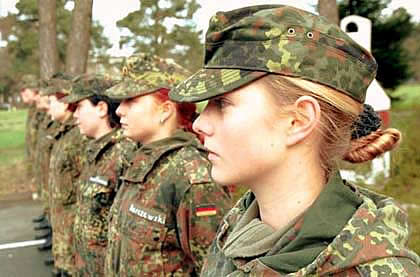 Küche, Kirche, Kinder, … Krieg?
Women have been for the first time admitted into combat units of German army

Germany was the last of the European countries that allowed women to join the fighting units of the Bundeswehr. Since 2001, the women serve in the armored corps of the army, fighter aircraft and navy, including submarines. They do not serve as rifle-toting infantry, though.

So far there were female soldiers only in the medical and music regiments. The traditionally conservative German armed forces will have to contend with women in three of the military’s legendary fighting units – the Panzer divisions, Luftwaffe and U-boats. The German authorities had resisted the move, but were forced to change their policy after a woman electronics operative Tanja Kreil took a case to the European Court of Justice and last January won the right to serve in fighting units alongside men. After that the Bundestag accordingly modified the national military law and the Constitution. The defense ministry meanwhile predicts that the proportion of female soldiers will not exceed 10%.

On the one hand, women were effective combat soldiers in two hugely successful modern armies – the Russian Red Army of World War II and the Viet Minh and Viet Cong in the Vietnam wars. On the other hand, as a senior officer of the British army told London’s Daily Mail: “Battlefields are ugly places and the thought of women being in the thick of battle is absurd.” 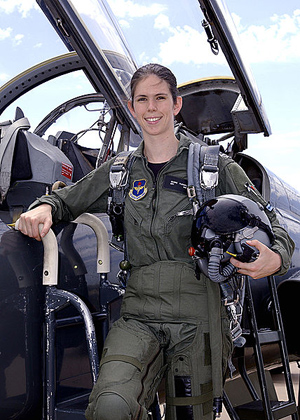 There are presently around 17,000 women on active duty and a number of female reservists who take part in all duties including peacekeeping missions and other operations.

The same rules and requirements will be applied to the women-soldiers as well as to their male colleagues. Make-up and jewelry will be banned while in uniform but, though the women will have to wear the uniforms, they may choose their underwear.